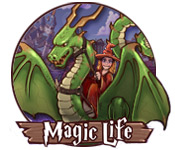 I love casual games, especially ones that let me pretend to live a whole other life. Games that let me pretend to wake up in the morning, find a job, go to work, go shopping, work on my skills, etc and so on. I was addicted to the Sims for a long time before Jake came along. I spent hours upon hours designing my dream home, creating little Sim families, locking them in basements until they perished so I could perfect my creepy backyard cemetery (does that make me sound warped? It was the only way to get tombstones!). But when Jake was born, I no longer had the luxury of staying up until 5am messing around with games. I had to prioritize my free time. So I more or less gave up extensive Sim playing, only breaking out the game every now and then. 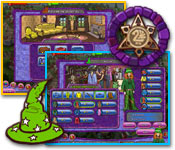 Games like Magic Life fill the void left behind, even though they’re no where near as complex or flexible. Still, they allow me to create a character and play out a lifetime in just a few hours. In the game, your character works his or her way up to the level of a powerful wizard by learning and mastering new spells, going to college, working out at the gym and buying random stuff at the various shops. Of course, all this requires money, so you need to spend some of your limited daily hours and energy earning wages. Granted, all of this is done through a simple click of a button, but it still requires a little strategy because some lessons require previous knowledge that can only be gained by mastering a job or completing tasks at the gym. You are given several missions throughout the game, some requiring you to spend loads of money at various places (which is where the job comes in handy), and others that require obtaining a certain object from one of the stores.

This isn’t an epic game. It doesn’t take much thought and once you’ve completed all the tasks, there is really no reason to keep playing. But it’s still a fun little game to pass the time. It retails for $9.99 on Big Fish for non-club members, $6.99 for club members. Since the club costs $6.99 a month, and you get a free game credit when you pay, it really does make more sense to just become a member to buy it cheaper, then cancel before for the next month if you don’t plan to buy another game.