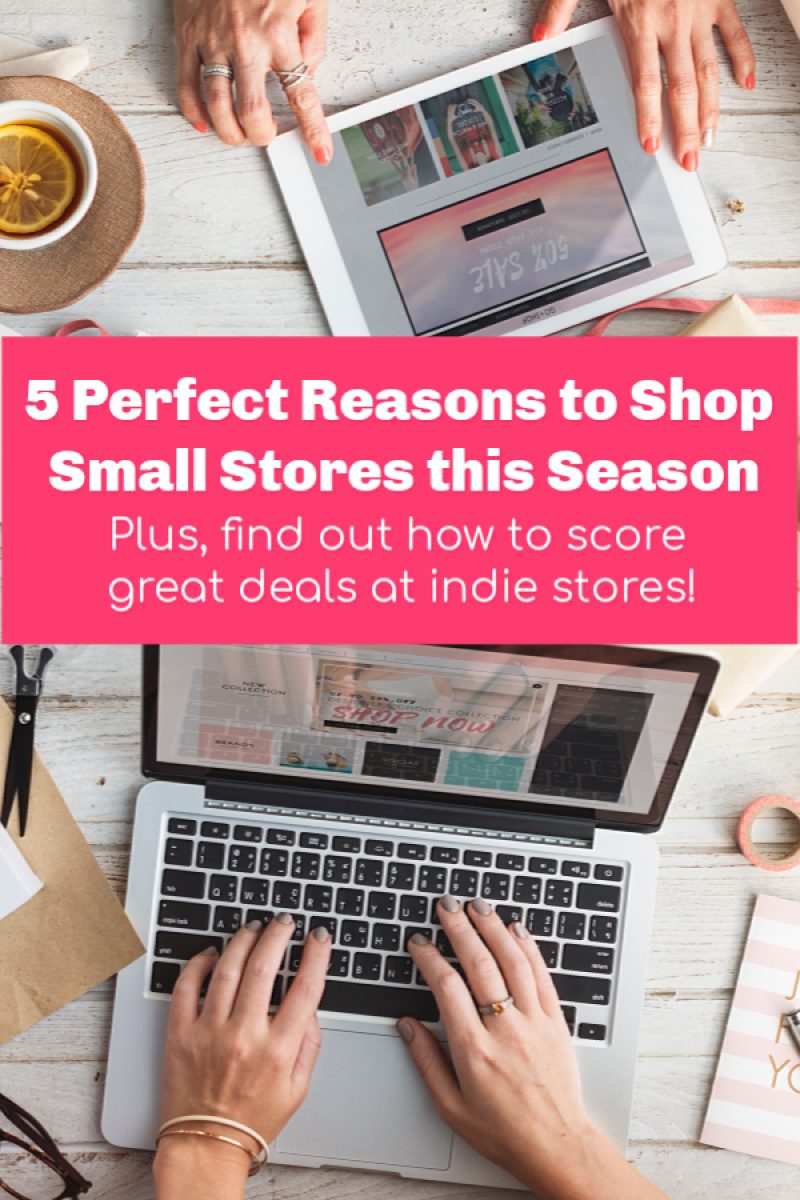 If you’re only shopping at major retailers this holiday season, you’re missing out on some amazing gifting opportunities! Yes, big box stores have their appeal. It’s definitely easier to get everything you need in one or two stops, and they tend to offer deeper discounts throughout the holidays. However, shopping small businesses has many rewards, too! Before we get into the reasons to shop through small, independent stores, consider this: every single large retailer in the US started out small. Amazon was once just a tiny little bookseller run out of a garage. Target began as a tiny company selling dry goods back in 1902. Best Buy started out as an itty bitty audio specialty store. All of these major retailers were once independent businesses and wouldn’t exist if people didn’t support them.

Read on to find out why (and how) you should add a stop to small businesses to your holiday shopping plan!

Benefits of Supporting Small Businesses During the Holidays

First and foremost, the money that you spend on small retailers really makes an impact. When you spend $100 at a large retailer, a small portion of the money eventually makes its way into the pockets of the workers. Sure, it matters, but let’s be honest: that big box store isn’t going to shed tears if you decided to take your money elsewhere. They have thousands of other customers ready and waiting to more than make up the difference.

Spend $100 at a small business, though, and that money goes straight towards things like rent, food, and helping families afford gifts for their own children. Your money matters at a large retailer, sure, but it REALLY matters when you shop small businesses.

My son is really into anime right now, but he’s not into the popular anime. Just about every store has things from Naruto, Tokyo Ghoul, and My Hero Academia. That’s great for teens who love those shows. Jake, however, is more into things like Sword Art Online, which isn’t really carried by larger retailers.

However, I found some really cool ideas through smaller indie merchants on platforms like Shopify and Redbubble. Even better: the prices are super competitive compared to big box stores. For example, I can get him a really cool 3D hoodie for about $45.

Jake is also really into Stranger Things and Bob Ross (I know, two very different things, right?). Unfortunately, so are millions of other people. Bob Ross is super trendy right now among teens, and Stranger Things is even more popular. It’s hard to find collectibles that are still in stock at the big stores, but I can find some fun little gifts to add to his stocking by searching smaller retailers.

3. They offer some great deals on stuff you REALLY want

If you think it’s impossible to find great deals in indie stores, think again! Many of them are trying just as hard to compete for your dollars as the big retailers, so they offer steep discounts during the holiday season. Need help finding these fab deals? Sign up for Sello and you’ll be notified when your favorite Shopify store has new coupon. The app is launching soon, so sign up now to be notified when it’s available. FYI, many, many, many of your favorite smaller online retailers run their store through the Shopify platform. Since they can use their own unique URLs, you might not even know it. Thinking that there’s no way small retailers can offer prices as low as the big stores? While that may be true for some things, many indie retailers offer competitive (and in some cases, even lower) prices than big stores because they have lower overhead costs. For example, the anime shops that I’ve been browsing sell hoodies for quite a bit less than some of the more well-known stores (like a particular store that stays on Topic, or one that rhymes with “tensors,” for example).

One of the things I love about shopping small businesses: 9 times out of 10 they offer stellar customer service. Think about it: when you’re a tiny store, reputation and word of mouth is everything. Stores just starting out don’t have as many reviews out there and they can’t afford to be slammed.

Aside from Amazon (who really does have great customer service), I’ve rarely had a good experience fixing a problem when dealing with a large chain store. In many cases, I’ve actually left the interaction in tears. On the flip side, any time I’ve had an issue with a smaller shop, it’s been resolved too my satisfaction within one conversation.

5. It keeps the big retailers on their toes

Consider one final reason to shop small businesses: without competition, things would cost a whole lot more! Don’t believe me? Look at your cable bill! Most cable companies have a monopoly in any given area. I pay nearly $200 a month for mediocre (and capped) internet access and increasingly unreliable cable.

The internet has been a great equalizer between large and small retailers.Once upon a time a certain large chain would move in and put small shops of out business, then raise their prices. Now, though, you aren’t just limited to that one store. You have a whole world wide web of options! If you start shopping at smaller businesses, the large chains will have to learn to compete for those dollars again.

There are many benefits to shopping small businesses, but to me, the first reason is the most important of all. I have many friends who own small businesses, and the profits that they earn through sales helps keep a roof over their heads and food on their table. I know that my purchase is making a real difference, and to me that makes it worth it a million times over!

I’m not saying you should only shop small. I still buy plenty from the big guys, too! I’m just saying that you should also check out smaller shops on your hunt for the perfect gifts. You might be surprised by what you find!

Do you have a small business? If so, I’d love to check it out! Share in the comments! If not, tell me something you love about shopping through indie retailers!