Spyro Reignited Trilogy is Our Pick for Game of the Year! 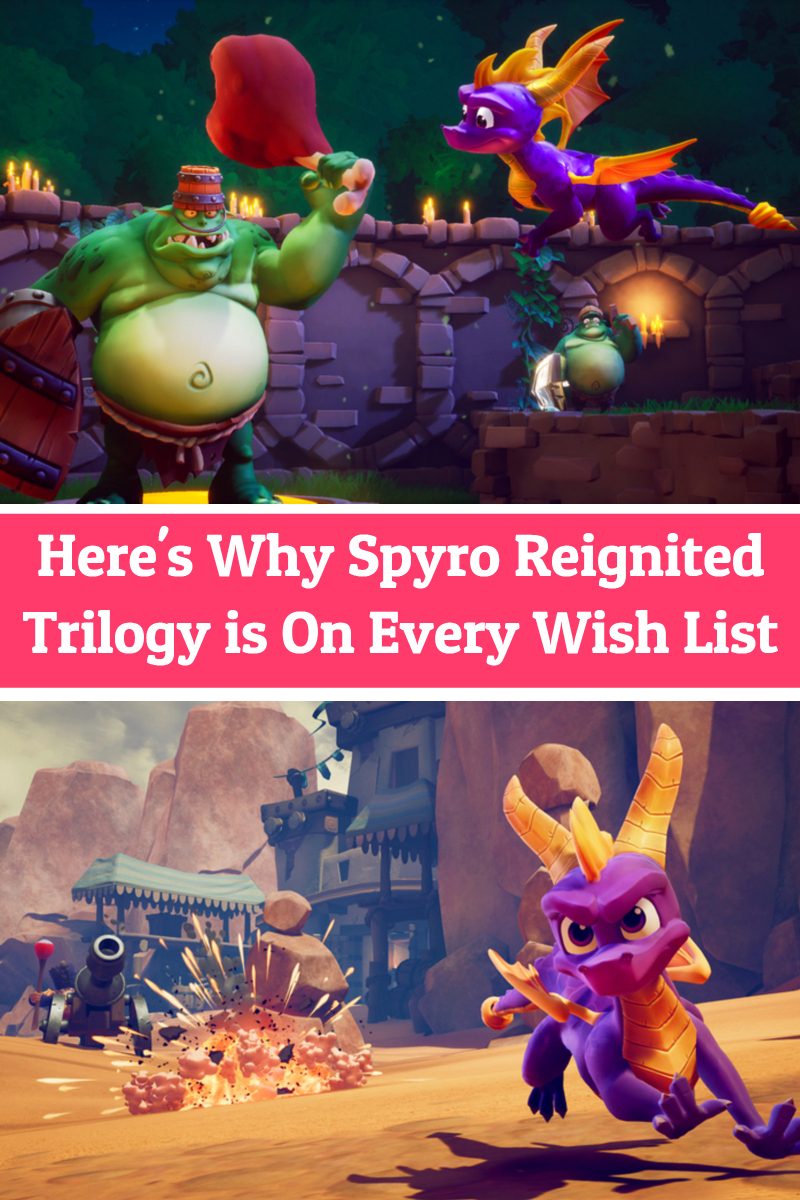 The Spyro Reignited Trilogy is the perfect blend of nostalgia and newness by keeping everything you love about the original games but giving them an updated makeover for a new generation. Find out why we think it’s a major contender for game of the year! Jacob and I received a complimentary download code to check out the brand new Spyro Reignited Trilogy on the day it came out. While it’s been in my holiday gift guide for weeks, we wanted to take some time to really dig in before sharing our review. Read on to see what we thought of it!

What is the Spyro Reignited Trilogy?

Twenty years ago, a charming purple dragon flew onto the gaming scene and stole hearts of all ages, from brand-new baby gamers first learning how to hold a controller to hardcore gamers who loved embracing their inner child. Spyro was a smashing success that spawned two sequels starring the titular character: Spyro 2: Ripto’s Rage!, and Spyro: Year of the Dragon.

While the graphics were great for their time (and many of us old gamers still appreciate them), today’s new platform gamers are used to playing life-like characters. Where once upon a time, the incredibly realistic graphics were reserved for cutaway scenes, now I look at my son’s games and think “wow, if that got any more realistic, it would be a movie!” takes advantage of all the tech advances to breathe stunning new life into all the characters that we’ve come to know and love, but at the same time it retains the true heart of the game. Each of the three games in the trilogy still follow the original story line and feature most (if not all) of the same levels, but they do it with a more modern flare. The colors are bolder, the graphics sharper, the entire world a lot more vivid (and that’s saying a lot, because the original games with bold and bright to begin with).

Key Trilogy Features at a Glance

*Key features and original storylines sections are pulled from the press release so that I don’t inadvertently mess them up in my rewording. Unleash the Dragon – The purple dragon that stole gamers’ hearts 20 years ago is back and looking more fly than ever in scaled-up HD graphics. Explore the expansive realms, re-encounter the fiery personalities and relive the adventure in fully remastered glory.

Massive Collection – The Spyro Reignited Trilogy lets players glide to new heights, unleash fire-breathing attacks, and explore lush environments filled with new detail bringing the Dragon and Avalar realms to life in more than 100 levels from the first three games. Each level in Spyro Reignited Trilogy is mapped faithfully from the originals, only now re-imagined with modern mechanics to give fans an excellent gaming experience.

Gnostalgia n’ More – This is the Spyro with swagger and personality that fans remember from their childhood. Returned and remastered Orb Challenges, mini-games and more make this an epic trilogy for the diehard Spyro-maniacs!

So Fly – The game collection is stunning, lush, and fiery! The Spyro Reignited Trilogy introduces players to a completely remastered game collection with a re-imagined cast of characters, brand-new lighting, animations, environments, and recreated cinematics—all in stunning HD.

Did You Hear That? – Fans of the Spyro games may recognize some familiar sounds in Spyro Reignited Trilogy. Tom Kenny, the original voice actor in Spyro 2: Ripto’s Rage!, and Spyro: Year of the Dragon and fan-favorite reprises his role as the voice of Spyro. The new collection also re-imagines Stewart Copeland’s original soundtrack from the first three games. The nostalgia factor is the highlight of the games for both Jacob and I. Spyro was among the first games that we played when I introduced him to gaming at age 3. I still remember letting him take the lead as Spyro, while I was “leashed” to him as Cynder. Together, we navigated tricky jumps and learned to fly in unison throughout the lush landscape.

When I told Jacob about the Spyro Reignited Trilogy, I wasn’t expecting such an excited “can we please get that” response. I thought he’d say, “oh, I remember that game, it was cute!” Instead, he asked me every day when it was releasing and downloaded it the moment my code arrived in my email. He launched it right away and dove in.

While the upgrade to the graphics stands out as the most obvious change, there are some other differences, including some that you might not notice right away. The Spyro Fandom Wiki has a great list of all the differences, both tiny and major. Here are some of the highlights:

Like I said, there are a ton of differences that you won’t even notice unless you’ve memorized the original games, but they all come together to create richer stories.

Long story short, whether you’re a fan of the original games or trying to find a fun gift idea for a brand new gamer, the Spyro Reignited Trilogy belongs on every wish list!

Spyro Reignited Trilogy is available for PS4, PS4 Pro, and XboxOne (including Xbox X). It’s rated 10+ for Cartoon Violence & Comic Mischief. I played it with Jacob when he was a lot younger than that, though.

Where to buy it: Includes Sales & Special Bundle Deals You can also find it in stores like Target, Walmart, and pretty much anywhere else that sells video games.

Have you played Spyro Reignited Trilogy yet? What do you love about it?