Complete Gilmore Girls Reading Challenge: All 408 Books from the Pilot Through the Revival 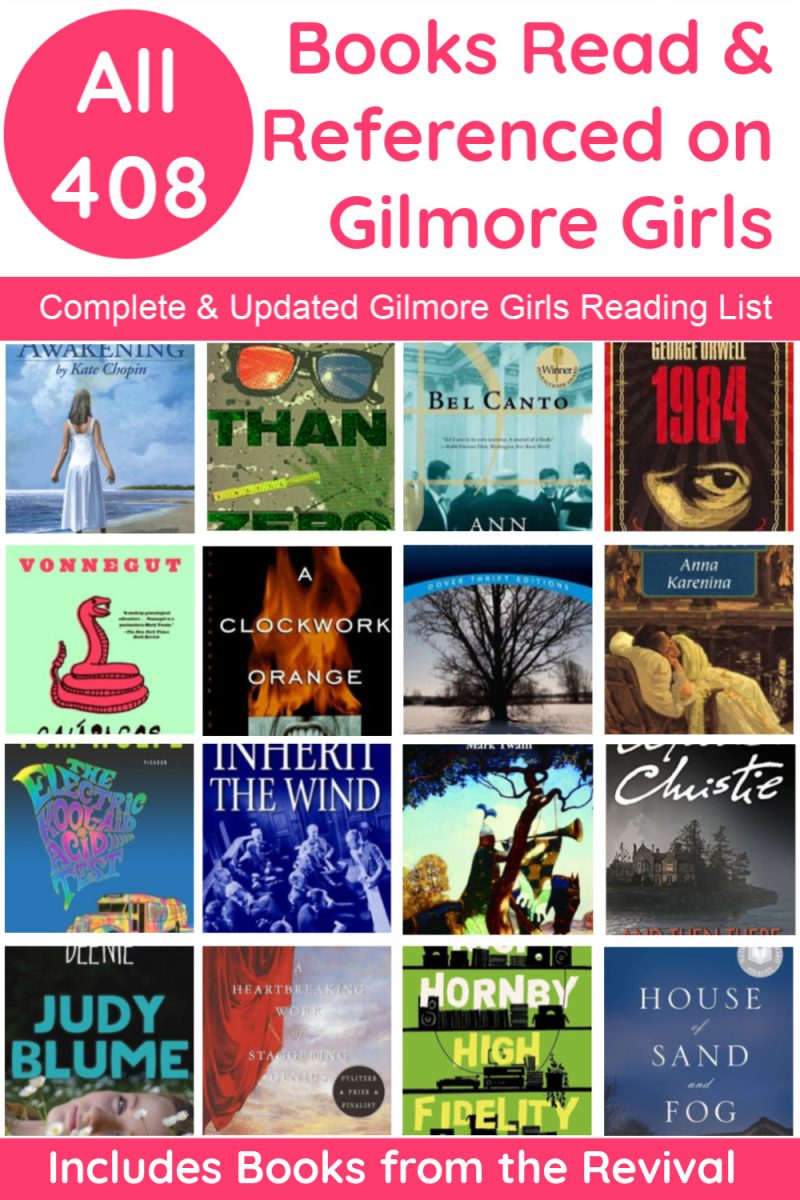 Want to read every single book every mentioned on Gilmore Girls? I’ve got you covered! Read on for all 408 titles from the Pilot episode all the way through to the revival, including many that other lists missed! The Rory Gilmore reading challenge is probably one of the most popular “books to read in your lifetime” challenges out there, so I know this isn’t the most unique list. However, after digging around and spending hours cross-checking sources, I found that most list completely leave off the revival and miss a good chunk of pretty important books altogether!

I also found that some didn’t really have the right books (It’s Alice’s Adventures in Wonderland, not just Alice in Wonderland, for example) or listed books that don’t even exist (see the note at the end for which one).

I can’t promise that it’s a perfect list but I spent a lot of time trying to make it as complete and accurate as possible.

Love “what to read” book lists like this? Check out my Around the World in 80 Books post!

Updated & Complete Gilmore Girls Reading Challenge: Every Book from the Pilot Through the Revival

Since not every book was mentioned or read by Rory, it would be far more accurate to call it the Gilmore Girls reading challenge versus the Rory Gilmore challenge. Semantics, I know, but I’m a fairly literal person.

Below are all 408 books that are obviously referenced or seen within the show’s 8 seasons (including the revival). By that, I mean I didn’t go through with a magnifying glass and try to read the titles to every book on every shelf & surface throughout the series. 😀

Just for fun, I linked to all of the books I’ve read so far. Some of them I read a very long time ago and only in school. I don’t want you to think I’m more pretentious than I actually am. 😀

FYI, the links are affiliate links, so if you make a purchase, I earn a small commission at no extra charge to you.

Want to print it out? Click here for the printer-friendly PDF version!

FYI, there’s a book that appears on every list: The Gospel According to Judy Bloom This is NOT an actual Judy Bloom book. April’s mom, Anna, is referring to Deenie. Here is the gist of the lines from the show that refer to it (it’s not the exact conversation).

LUKE: I saw her pictures. The one in the lab, and the one with the Christmas tree, and you never told me she wore a back brace! Why was she wearing a back brace?
ANNA: Oh, she had just read ‘Deenie’. It was a phase.
LUKE: What the heck is ‘Deenie’?
ANNA: The gospel according to Judy Blume.

So now you can stop searching for that one!

Credit where credit is due

While I’ve watched Gilmore Girls from start to finish at least 8 times, I never would have had the patience to pause and note down every single book mentioned, read, or shown on my own. I used a lot of other resources to fill in the gaps, including:

So, how many of the books on the complete Gilmore Girls reading list have you read?