Those on the keto diet already know all about the benefits of MCT oil, but what about the rest of us? Is it worth trying even if you haven’t made an enemy out of carbs? Turns out, it is! Read on to learn about MCT oil benefits, even if keto is just not your thing. 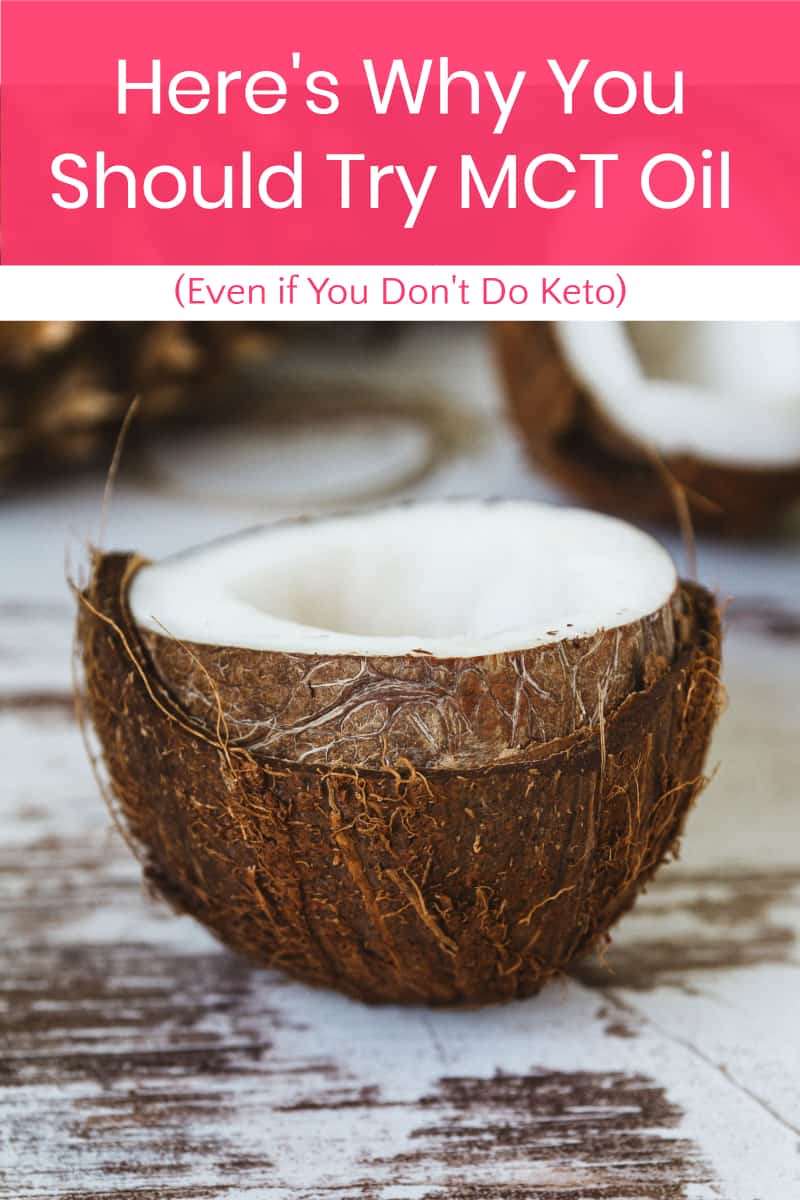 Quick note: BUBS Naturals sent me a package full of their MCT Oil products (and the freaking coolest little hand-held frother ever) to facilitate this post. All opinions are always my own.

Benefits of MCT Oil (Even if You Don’t Do Keto)

MCT stands for medium chain triglycerides. As the “T” part implies, it’s a type of fat. Don’t worry, it’s the “good” fat, the kind found in things like coconuts (which is where BUBS gets theirs from) and palm kernel oil. It’s totally devoid of carbs, gluten and protein, which is part of what makes it so popular for people on the keto diet.

However, the major benefits aren’t just for people who have villainized carbs. Even if you love a good chunk of bread as much as I do, there’s a chance you’ll notice them, too! By “chance”,  I of course mean “this statement has not been evaluated by the FDA and I am in no way promising that you’ll experience health benefits from MCT oil. This is not medical advice, please talk to your doctor first before using supplements, etc and so on.” Got it? Good.

I’m not going to pretend to understand all the science involved, but basically the molecules are already fairly simple, so your body can use the energy from them right away instead of waiting for them to be metabolized by your entire digestive system. Athletes often tout the benefits of MCT oil as an energy and endurance booster, and at least one scientific study supports that claim. Even if you’re not an athletic superstar, we can all use extra energy, right?

If you’re looking for a healthier appetite suppressant than some of the scarier products on the market, you’ll love MCT oil. It helps you feel fuller longer, so you’ll be less likely to grab junk food from a vending machine when your breakfast wears off. This particular benefit has been studied fairly extensively. This one found that  a diet rich in MCTs resulted in more fat loss than one with LCTs. A more recent study concluded that MCTs  do help reduce your overall food intake. While both studies were fairly small, the results are definitely promising for those looking for a more natural way to curb their appetite.

If you’ve reached this point and you’re thinking, “Well, I already have loads of energy and I never overeat!” go away. No, I’m kidding. I kind of hate you right now, but don’t leave. Even if you’re in the best shape of your life, I think you’ll want to stick around for this benefit! MCT oil may just make you smarter (or at least enhance your mental focus enough to make you think you’re smarter).

As BUBS explains, your brain runs on fatty acids, and the ketones from the MCT oil pass through the blood-brain barrier fairly quickly. As far as studies go, so far they’ve mostly focused on how MCT oil helps those with dementia and Alzheimer’s, and the results have been pretty encouraging. There haven’t really been any studies (that I could find, anyway) on the mental boosting effects on healthy brains, but it’s definitely one of those “can’t hurt to try” things!

Other potential benefits of MCT Oil

While those are definitely the three biggest reasons to give MCT Oil a try, they’re not the only potential benefits. Others include:

MCT oil can have side effects, though. While the overall risks are pretty mild, too much can lead to fatty buildups in the liver. It can cause stomach & intestinal woes, especially when you first start using it. It can also cause you to gain weight if you overuse it (MCTs are still fats, after all). It’s important to stick to the recommended serving sizes on the package. BUBS Naturals has single serving packets to make it easier. Which brings us to…

BUBS Naturals not only makes superior products, the brand has a terrific story! Let’s check out that story first, then we’ll talk about what makes their MCT oil so fantastic.

Traveling for Thanksgiving? @bubsnaturals singles can go with you! It’s ONE white powder the @tsa will allow you to fly with and you don’t even need a balloon!

The name “BUBS” is a tribute to Glen ‘BUB’ Doherty, a Navy Seal and close friend of the owner of BUBS Naturals. You may recognize his name, he was one of the four Americans killed in the Benghazi attack in 2012. While being a Seal is definitely enough of an accomplishment, he was more than that. According to the BUBS Naturals story:

He was also very dedicated to living the best life possible, and that included treating his body well through great nutrition. BUBS Naturals MCT Oil & Collagen Powders honors that aspect of his life, then use a portion of the sales to honor the other aspects of Glen’s life.  They give 10% of every sale to the Glen Doherty Memorial Foundation, an organization that helps fund education costs for both current & former Special Operations members (and their families) of all branches.

10% of everything we do benefits the @glendohertymemorialfoundation. No BS and no free lunches. Because our economics teacher told us that was impossible.

I was a Navy wife. My uncle, cousins, and grandfather were also in the Navy. Well, one cousin was a Marine, but we all know that’s really part of the Navy! 😀 Obviously, supporting veterans is very important to me, so I appreciate any brand that makes it a major part of their overall mission statement.

Of course, a good story will only take you so far if you don’t have a great product. Fortunately, BUBS has that covered as well!

First, BUBS only uses sustainably sourced coconuts in their MCT oil powder, so your energy and brain boost doesn’t come at the expense of the environment. Next, they absorb it into a premium non-GMO tapioca starch to help the oil better absorb into both hot and cold beverages. In other words, you can easily mix it into your morning jolt to make “bulletproof coffee” or swirl it into a tall glass of iced tea.

I put mine into my coffee at first. I have to be honest, I didn’t like the taste. I’m picky about my coffee, though, so that’s not really the brand’s fault. I mixed it into a few other things and found that tea works best for me. It really does absorb right into the liquid, though. I was worried that it would be clumpy and gunky. Totally not the case.

BUBS Naturals also makes collagen protein powder. I didn’t try that, though, because I don’t eat anything sourced from mammals for my own personal reasons. I can tell you that they only use sustainably sourced grass-fed cows in their collagen products. Collagen is supposed to be really great for your joint health, so I kind of wish I could use it. I believe there is plant-sourced collagen out there, but it’s not really as good as the animal-sourced stuff. BUBS Naturals Collagen is also unflavored, so you can add it to any liquid you want without worrying about the taste.

Oh, and one last thing, the frother. You can find it on their website, and it’ll be the best $12 you ever spent. While it’s especially useful for mixing your MCT oil & collagen into your coffee, it’ll also whip & froth milk for lattes & cappuccino-style drinks on the go. I am crazy in love with it!

Long story short, MCT oil is beneficial even if you’re not a keto person. If you’re ready to give it a try, BUBS Naturals is the way to go! Not only do they make superior products, but they support a wonderful cause through their sales.

Visit the BUBS Naturals shop to check out all of the MCT Oil & Collagen products.