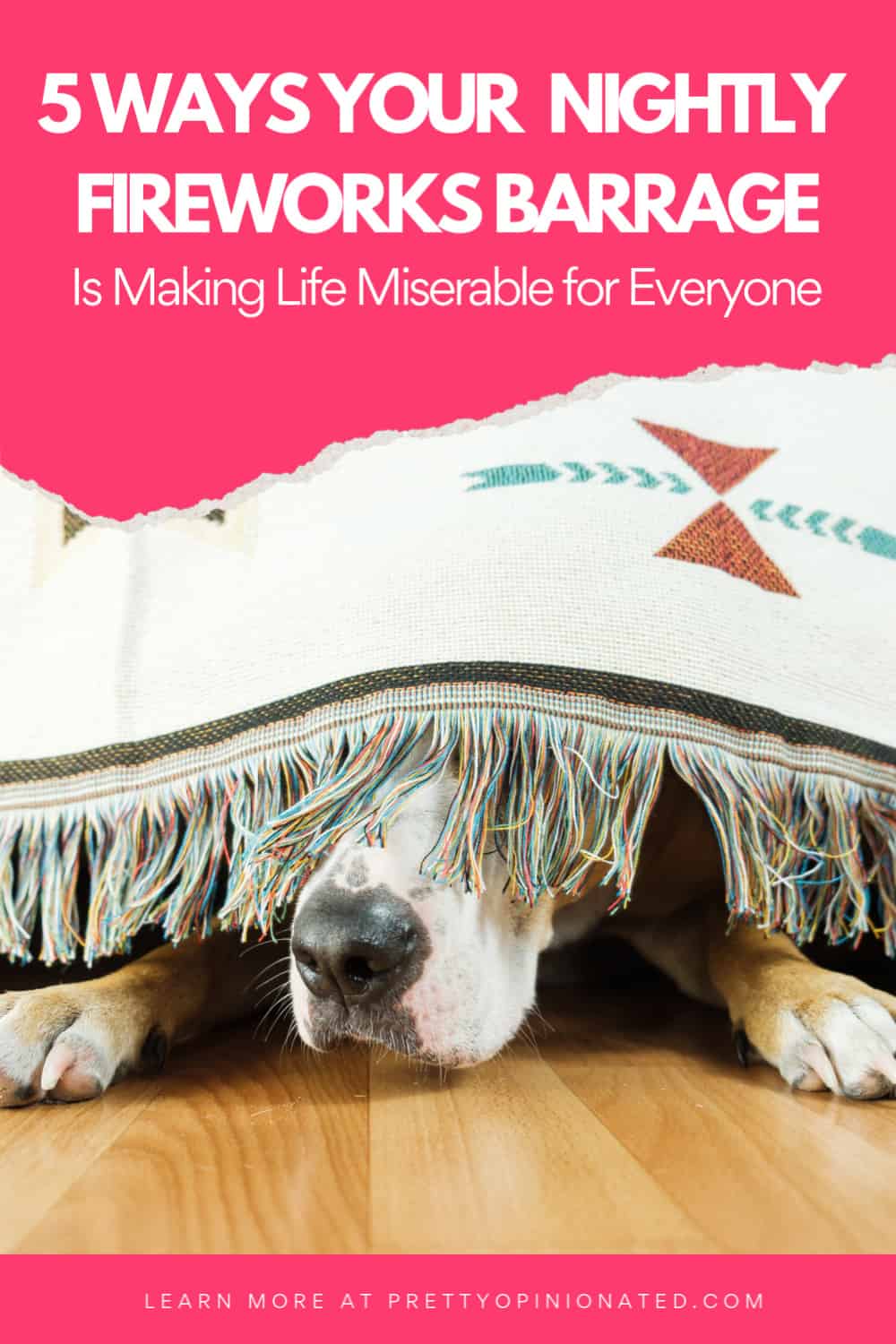 To those in setting off fireworks late at night EVERY night in a residential area, can we talk for a moment? I know you’re just having some fun, but it’s at the expense of many others, and that’s just not cool.

Look, put simply, your desire to see pretty lights in the sky and hear the big “boom, boom” is wreaking havoc on the lives of the people around you. Let me explain how, because maybe you genuinely don’t get how your midnight fun = misery for the entire neighborhood. Fair warning- I’m writing this after a night of sleep deprivation caused by your nonsense, so pardon me if I sound a little cranky. Speaking of, let’s start with…

#1 You are causing sleep deprivation and making people incredibly cranky

Do you know how hard I’m working right now to keep words like “bag of human excrement” out of this post? Very.  Wanna know why? Because I’m tired. So freaking tired. I have problems falling asleep at night as it is. Then, the moment it finally happens, I’m brutally ripped from my slumber by an onslaught of booms and bangs. It takes me another hour to fall back to sleep.

Then, I still wake up early, because my body is a traitor who forgets that we hate mornings. I’m getting maybe 6 hours of sleep every night. It’s affecting my ability to work. I make up for it by taking 3-hour naps every day, which means I get even less done.

I know we live in the most self-absorbed nation in the world, so I bet at least some of you are thinking, “So what? Not my problem if you can’t sleep. Doesn’t affect me!” A- you’re part of what makes this world such a crappy place lately and B- if you don’t care about being a decent human being to neighbors who need sleep, maybe you’ll care about the next item on our list.

Did you know that 20% Iraq or Afghanistan vets and 30% of Vietnam vets experience PTSD each year? It’s incredibly ironic that we celebrate the 4th with displays that trigger the very people who gave us a 4th in the first place. When you contain your inconsideration to that one day, though, at least they have time to prepare.  I have friends all over who offer up their “middle of nowhere” homes as a “quiet space” during the holiday. While they shouldn’t have to leave their homes just to feel safe, at least they know it’s coming and can make alternate plans.

How do you prepare for something that happens every single night? They shouldn’t have to wear noise-canceling headphones and earplugs or leave home every night just to avoid feeling like they’re back in a war zone.They have a right to feel safe in their own home. You are taking that away from them.

If #2 isn’t enough to get you to turn your humanity back on, maybe this one will do it. I mean, even if you hate people, most of us like dogs, right? Did you know that more dogs run away on the 4th of July than any other day of the year? Studies show that they literally think they’re going to die when they hear fireworks. So, they do what anyone would do when faced with certain death- they flee. They hop over or claw their way under fences. They break through screen doors, bust out windows, and basically do anything possible to escape their terror.

Thousands get lost. Many even die. And that’s just when you contain your fireworks to one day. Imagine how many dogs are suffering right now because you can’t stop your urge to see sparkly lights and listen to the big booms every freaking night. For eff’s sake, man, if you won’t think of the people, think of the dogs!

#4 You’re literally playing with fire, risking all of our homes

This one’s for all my friends in the more rural areas. It doesn’t take a genius to realize that setting off fireworks in a freaking forest is a monumentally stupid idea. According to the National Fire Protection Association, “Fireworks started an estimated 19,500 fires in 2018, including 1,900 structure fires, 500 vehicle fires, and 17,100 outside and other fires. These fires caused five deaths, 46 civilian injuries, and $105 million in direct property damage.”

Again, those stats came out BEFORE people started setting them off EVERY freaking night. Maybe I don’t have a “right” to expect to be able to sleep in my own home, but I sure as heck have a right to not have it burned to the ground because you like sparkly lights.

#5 You’re increasing your own risk of becoming a statistic

An estimated 10,000 people suffer injuries related to fireworks every year.  Once again, I need to remind you that those stats come from prior years, when fireworks were mainly contained to on and around the 4th. I bet you a bazillion imaginary dollars that number goes WAY up for this year.

Look, I get it. We’re all experiencing a range of emotions that we’re not used to dealing with. We’re bored, pent up, locked up, and just plain on edge. Blowing off steam by watching pretty lights and listening to the big booms feels like a good way to release that frustration.

Maybe we can compromise. If you keep your big booms to the days surrounding the 4th (days, not weeks) and knock it off by 11PM, I won’t rally other cranky people to petition my township for a new ordinance that ruins your fun year-round. I think that’s more than fair, considering that your lack of consideration will still cause all of the above problems (except #1 if you stop early enough) on those days.

Of course, you could go the extra mile and just leave fireworks to the professionals, but I’m not expecting that much consideration. After all, I have a pretty good feeling that 99% of the people setting off fireworks late at night in a residential area already know how much havoc their wreaking and just plain don’t care.

Are you dealing with a constant barrage of late-night fireworks? Go ahead and use the comment section below to get your feelings off your chest. It may not stop people from doing it, but venting helps a little.