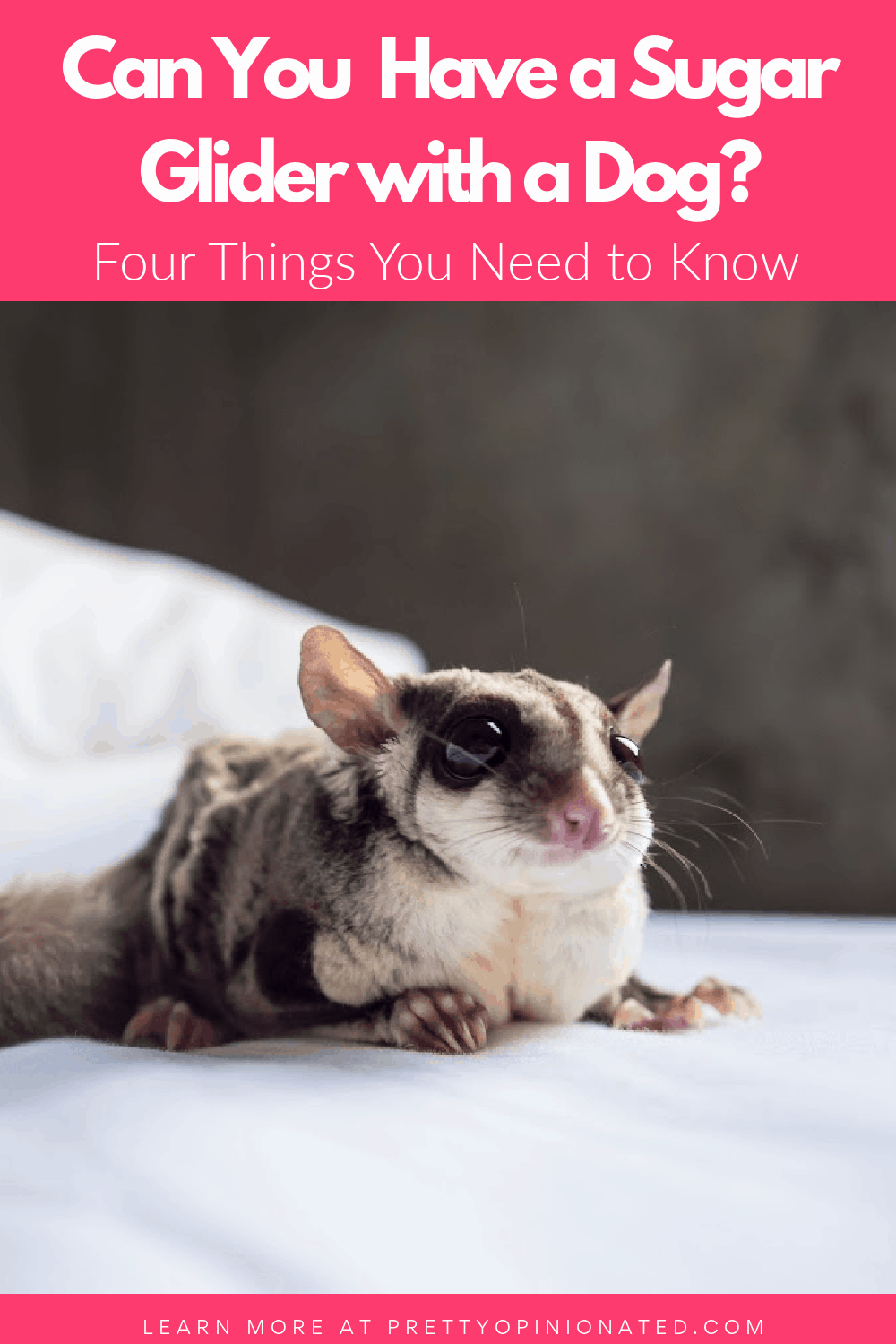 Are sugar gliders and dogs a good fit for each other? If you’re considering adopting one of these trendy pets into a dog-centric home, that’s definitely something you need to know. The short answer is yes, they can get along fairly well under the right circumstances.

My cousin has both a sugar glider and a dog (and a hedgehog, a macaw, and probably more that I’m forgetting, she rescues neglected animals). However, there are some important things to consider before bringing these two pets together.  With that in mind, below we’ll look at what you need to before introducing a sugar glider to your dog. 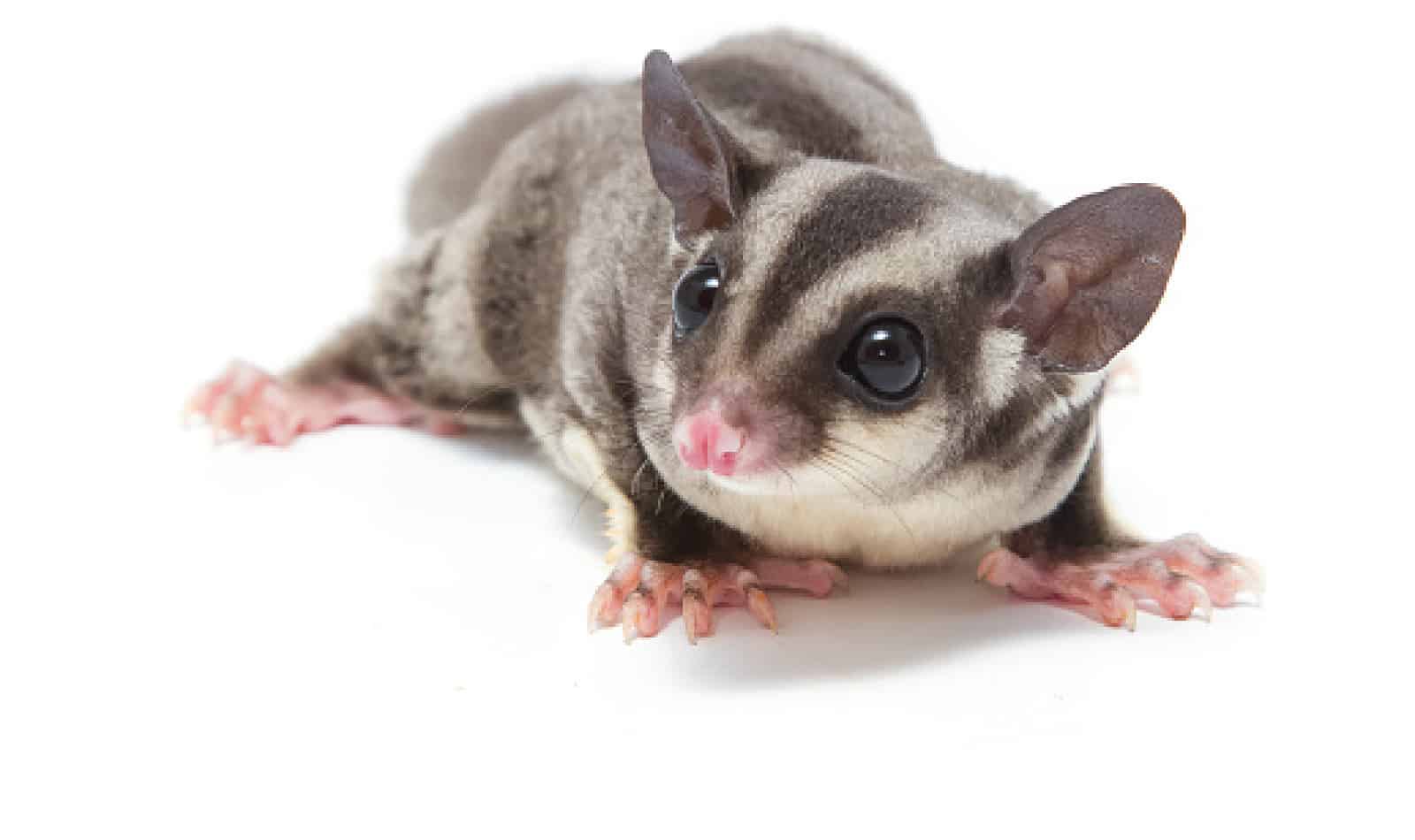 Note the word “before” up there. That’s important. We’re not talking about the steps to take during those first introductions. That’s really something you should discuss with an expert. Rather, these are the things to consider before you even start to research sugar glider breeds and colors to choose the right one for your family.

Also, I’m not endorsing adopting a sugar glider. There’s a lot of debate on whether they’re ethical to own. Like I said, my cousin has one, but she rescued him from a neglectful home. I think they can be ethical IF you’re willing to devote the time to learning how to properly care for them. Today, we’re strictly talking about sugar gliders in dog-centric homes. So, let’s take a look at what you really need to know.

Not all dogs do well with small pets

This is by far the most important step to ensuring a happy, safe, and harmonious home that includes both a sugar glider and a dog. Some breeds do better than others with small pets. For example, the Golden retriever, Maltese, and Bichon all have fairly low prey drives, so they’re not as likely to “hunt” your glider.

On the other hand, sighthounds (such as the Pharaoh Hound or Saluki), most terriers, and other hunting breeds have incredibly high prey drives. While it’s theoretically possible to train them to leave your glider alone, it’ll take a lot of work. Even then, you’ll never be able to leave them alone unsupervised. I would never be able to risk adopting a sugar glider with Freya. She’d eat it in a heartbeat.

Talk to other owners of your dog’s breed to find out if anyone has experience with training them to do well around small pets. Facebook groups are a good source of info, and there’s at least one for every breed imaginable. Join a sugar glider group as well while you’re at it.

If you’re thinking that you can just keep your glider far away from your dog at all times, think again. These tiny marsupials are incredibly social animals. They simply cannot tolerate a solitary life locked away in a cage in another room, only brought out when you’re in the mood for a little play session. That’s why experts recommend adopting a pair rather than just one.

Interestingly, gliders view everyone in the household as part of their colony. That includes your dog. In fact, if you’re unable to adopt two gliders, your dog can actually become a close companion of your single pal. Of course, it’ll take some work to get them both to the point where they can interact without fear, but the right dog can bond with the right glider.

You can never, ever, ever trust them alone together

Even if your dog and glider form the strongest bond in the world, understand that you will never be able to leave them alone unsupervised. Ever. Gliders are itty-bitty, weighing in at a grand total of about 6 ounces. That’s not even half of a pound. All it takes is one mistake- one snap second- for devastation to occur.

Supervise them any time they are together. If you’re going out or can’t watch the duo for any other reason, put your glider back in his habitat. Even if your dog has never shown a single sign of aggression to your glider, accidents can happen. Something as simple as a paw coming down at just the wrong time and on just the wrong spot can end in tragedy.

Sugar gliders can transmit diseases to your dog

While fairly uncommon, sugar gliders can transmit certain diseases to your dog. Although you’re far more likely to catch them than Fido is, to be honest. Giardia, for example, can jump from your glider to your pup when Fido drinks from water contaminated with your glider’s fecal matter. Cryptosporidiosis also spreads through contaminated water or food.

Others include salmonellosis, leptospirosis, clostridiosis, and toxoplasmosis. Not only can these diseases spread to your dog, but to you as well. As mentioned above, though, it’s not incredibly common. Still, definitely something to know before introducing a sugar glider to your dog, especially if Fido has a preexisting medical condition that could make one of these diseases even more devastating.

In the end, most dogs can do just fine living with sugar gliders. Emphasis on most, as hunting dogs and breeds with high prey drives really aren’t a good mix with tiny pets. However, even if you have the mellowest dog on the planet, you will have to put in the work to make sure they get along.