Ashfall by Mike Mullin: What Makes it Worth Reading?

Ashfall by Mike Mullin is one of the most popular “what if Yellowstone erupted” YA apocalyptic books of the century for a good reason! Find out what makes this doomsday story so special! In 1980, when Mount St. Helen’s erupted, it blew 1.4 billion cubic yards of ash in 80,000-foot eruption column that was detected over 22,000 square miles. Beneath the surface of Yellowstone National Park lies a supervolcano that, when it last erupted, around 640,000 years ago, ejected 8,000 times the ash and lava of the 1980 Mount St. Helen’s eruption (according to the Discovery Channel: Supervolcano).

What would happen if that supervolcano erupted today? The world is a lot more populated than it was 640,000 years ago, and that eruption wasn’t even the largest in this supervolcano’s history!

Well, in Ashfall, Mike Mullin posits his post-eruption theory (based on the extensive research that he did while writing the book) of what would happen, and tells the story through the eyes of a 16-year-0ld boy from Iowa trying to find his family after the supervolcano blows it proverbial lid.

Heads up: I read this book for free and this post contains affiliate links. If you make a purchase, I get a small commission. Thanks! 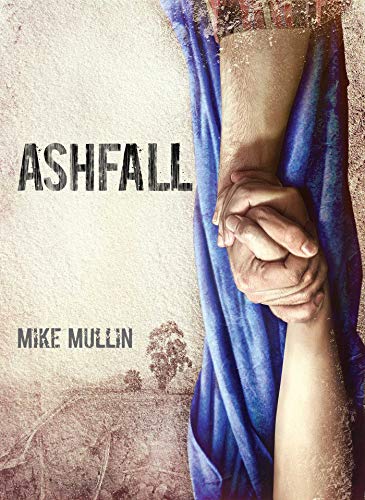 Alex’s last words to his parents and little sister were said during the heat of an argument. Alex won the fight and got to stay home alone while the rest of his family traveled two hours away to his uncle’s house in Illinois. What should have been a peaceful weekend of staying up late playing World of Warcraft quickly disintegrated into a scene from the worst disaster movie imaginable. Alex’s bedroom and front of the house crumbled in flames, trapping Alex beneath his desk.

He manages to escape, only to find that getting out from that tight spot was the easiest thing he’d have to do over the next dew months. For the next two days, Alex hides out in his neighbors’ house, waiting for the incessant booming sound that has filled the air to finally stop. After a series of events that make it too difficult for Alex to remain in his home town, he sets off on skis (easier to get through the thick ash) to find his family.

Along the way, Alex struggles to find food, water and shelter, and deals with some particularly nasty people. He also finds a few left with their humanity in tact, including Darla and her mom (although Darla isn’t too fond of him at first). To say that the story is bleak would be an understatement, yet also somewhat unfair.

It is bleak, disturbing, and distressing at times. Actually, at most times. But it is also a “coming of age” story, and a tale of determination, loyalty and hope. Alex gets help when he least expects it and finds strength that he never knew he had.

I should note that there is some sporadic strong language (I recall two or three incidents), and some sex talk (but not in explicit detail). To me, that made it more realistic, as a boy traveling across the state in the midst of a volcanic winter while practically starving to death and encountering the worst of humanity surely isn’t going to shout “well, golly gee!” But strong language has never bothered me when used in context, and the few incidents were definitely used in context.

There is also violence, but that’s to be expected in a world where people have all but lost their humanity. To me, the most disturbing part of the story was just HOW FAST so many people lost that humanity, how fear of the unknown can turn someone into a raving lunatic in a matter of days.

I also had a very difficult time with some scenes where Alex had to slaughter animals to survive, but I was a vegetarian for 17 years (and I still don’t eat mammals), so I’m really sensitive to that sort of thing.

I read the whole book in one day, so it definitely held my attention. It’s a little slow in the beginning and at times throughout the book, but I still wanted to keep going to find out if Alex ever did make it to his family. I would recommend this to teens and adults who enjoy stories about natural disasters or world-changing events (I was going to say apocalyptic, but it’s not really the end of the world so much as a total change in the world).