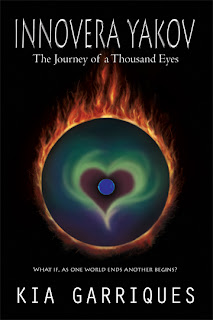 Innovera Yakov: The Journey of a Thousand Eyes

Innovera Yakov – The Journey of A Thousand Eyes takes you into a world of excitement and danger where thoughts and feelings are overheard and minds can travel to other worlds.

Be prepared to immerse yourself in a world where falling in love could cost you your life and nothing is as it seems. Innovera Yakov – The Journey of A Thousand Eyes is the first book in an action-packed fantasy drama series where characters with powers of healing and destruction live, love, compete and disappear without a trace while they are being prepared for the Journey. 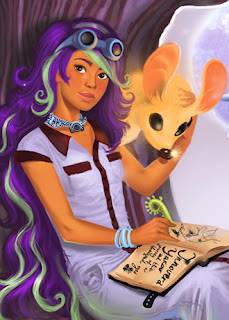 Kia Garriques studied writing and English literature at University and has been a published short story writer since 2009. Her first story “The Invisible Alien Watcher” was published by Micro Horror in 2009 and reprinted by Pill Hill Press in 2011. Innovera Yakov: The Journey of a Thousand Eyes – is her first novel in the ‘Worlds’ series.

Blu Tara stared her sister in the face. ‘Let me tell you what you don’t know about love, Gamma. It is a curse. You will scoop out your core and abandon it just to have the Being that you love. You will steal another person’s life force if it makes it easier to get it. You will abandon the world you have been cradled in, betray everything and everyone you care for. You’ll give up your name for it.’

Blu Tara’s voice went soft and dreamy. ‘You will gladly close your eyes and embrace the world of darkness. You will kill or die for it. And you will hate yourself for the weakness that it brings on you. So don’t talk to me about love.’

Gamma shook her head. ‘You’re not making sense,’ Blu Tara. ‘You talk as if… I’m the one who should be upset about all this.’

Blu Tara lifted her hand dismissively. She pointed a hot finger at Gamma. ‘Anyway don’t forget what we are.’

‘And what are we?’ Gamma glared at her..

‘Different. Strange. Something to be frightened of. Two Beings that can fuse and burn everything to ashes. That’s the way they all see us down there. That’s what the Stardog wants from you – the powers you possess.

‘I hate them all. With their suspicious, shiny faces and their empty games. I hate that Voice which drones on and on at us in the Learning Dome as soon as we’ve finished resting.

Innoverans! All those perfect, pretty Beings; they remember nothing — it’s the curse of this shallow, shining world. Tell me, Gamma – what do you remember of the world we come from before your Odors Apeno dumped us here?’

Gamma swung around to face her sister fully. ‘Blu Tara! What’s got into you? Where’s all that coming from? I’ve never heard you speak like that before. This is about Krave and I- not you!’

Krave and you – don’t make me laugh. And, oh! Here’s a big difference — between you and I this time, Twin Sister. It’s the answer to your question that you brought me up here to ask.’ Blu Tara mimicked Gamma’s soft and musical voice, Why do you want to kill Krave?

Here’s the answer, Gamma. I will do whatever I have to do to save myself. I’m the half of you that’s not like you. I don’t have a weeping heart. Now I’m out of here. I need my Rest.