Ezzie Lovegreen lives in a world where witches and ghosts are real. That doesn’t mean she’s not surprised when she’s suddenly being haunted by one at school.

With the help of her best friend Stella, her boyfriend Beau, and her grandmother Winifred, Ezzie must find out what happened to the ghost and set her free.

Secrets will be revealed that could change Ezzie’s life forever. Will Ezzie be strong enough to face the challenges set in her path?

Loved it!! Ezzie is such a rich character trying to make her way in a world where witches and ghosts are everyday events. Jessica Gibson writes brilliantly and flawlessly, with smooth flow throughout the entire story. Ezzie has a tough choice to make: she needs to decide which coven she should join. Not something your average teen has to worry about, right? Well, in Ezzie’s world, it’s completely normal and a rite of passage. It’s a big decision! Factor in normal teen high school life (like relationships!) and Ezzie has a lot on her plate. So she really doesn’t need to deal with ghosts bugging her for help! Yet when a ghost named Charlie asks her for help, Ezzie is more than willing.

Charlie helps bring Ezzie and Beau closer together. What I LOVE about this story is that it isn’t all “I just met you and not I would die for you” love that is prevalent in so many teen books. It’s slow, natural and sweet. It’s realistic, an element that is sadly lacking in many books. Gibson is setting up a potentially beautiful romantic element for future books in the series, but Haunted U isn’t a love story itself.

I also love that every character has its place in the story. Givson doesn’t throw in random characters that have no meaning in the long fun. Even the ghosts have a role to play in the plot. It is truly gorgeous writing that leaves me wanting more. I can’t wait to read the next book! 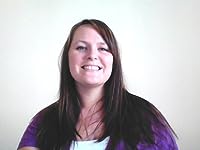 Jessica Gibson is a recovering bookaholic, she’s down from four books a week to a more reasonable one. It was that love of words and creativity that made her dream about writing her first book. That dream was hidden for years, always put on the back burner, filed away in the “someday” section, until her husband Matt gave her the kick in the pants she needed to actually get off her butt and write.
Jessica and Matt live in Southern California and have a serious addiction to reality tv shows like Pawn Stars and American Restoration. They have one son and hope to add to the family in the near future.

Enter to win one of two paperback and swag packs from Hayson Publishing. Fill out the form below to enter a Rafflecopter giveaway