What is it Like to Recover from a Hysterectomy? 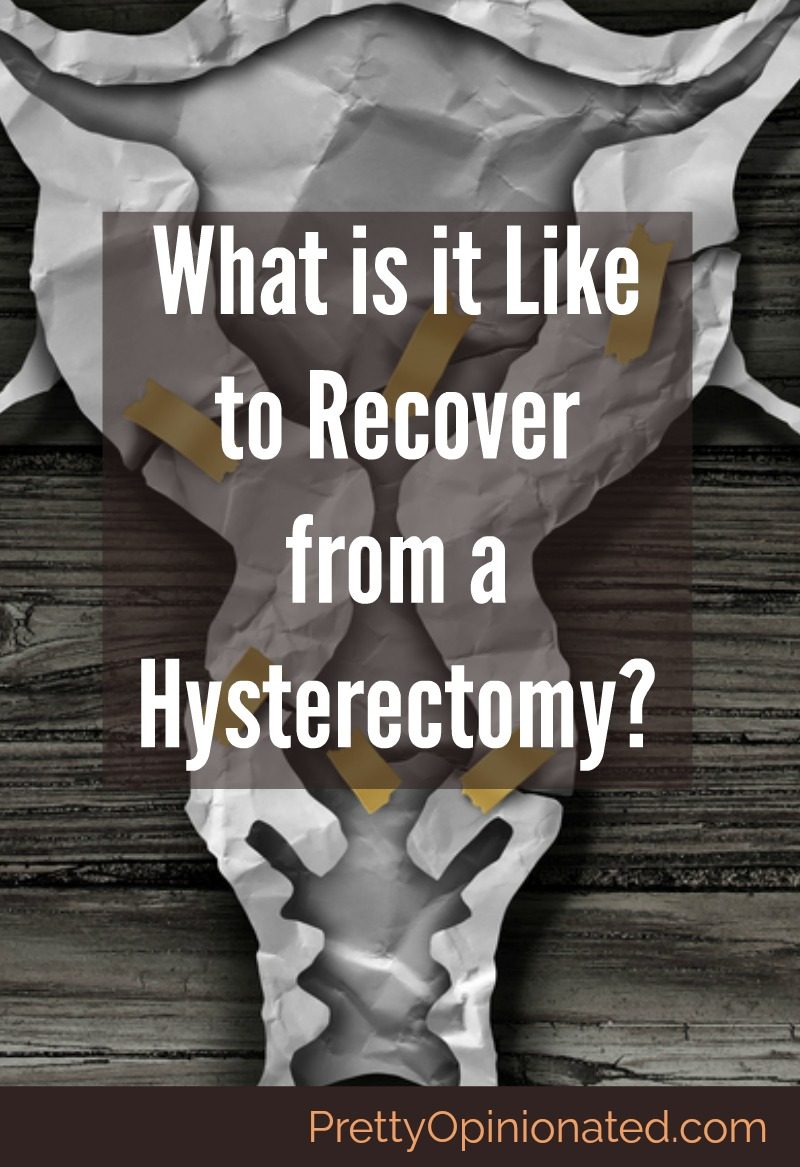 What is it like to recover from a hysterectomy? Check out my totally un-sugar-coated truth about what to expect hours, days, and even years after the surgery. I originally starting writing this post on what it is like to recover from a hysterectomy a week after my surgery. Everything was going fine at that point. On Sunday, I ended up in the hospital with a fever from what I thought was a bladder infection. Turned out to be a post-op infection AND a bladder infection. I was in the hospital for four days. After all that, I thought, maybe I’m not the best person to talk about recovering from a hysterectomy! I don’t want to freak anyone out!

Rather than go into detail about that, I’m going to stick with what I originally wrote. This is about the first week post-op, and is pretty “typical.” Of course, when it comes to medical procedures, we’re all so different that there really is no “typical.” Anyway, this is the totally honest, sometimes TMI version of what it’s like to recover from a hysterectomy during the first week and beyond.

What to expect immediately after your hysterectomy

Pain. Oh my gods, the pain. I’m not sugar-coating for you, it hurt like freaking hell. I remember waking up and hearing the nurse ask how I was feeling. I remember telling her “confused and in pain.” I must have looked really horrible because they kept shooting me full of dilaudid. So much so, in fact, that my blood pressure almost bottomed out! It felt like someone had torn apart my insides, which they kind of did.

Once they got the pain under control, they discovered that my kidneys didn’t “kick back in” properly. Not sure what that means, since I didn’t realize they were shut off, but it basically meant getting stuck with the catheter overnight while the pumped me full of fluids. I didn’t sleep the first night. At all. Well, maybe 10 minutes here and there, but that’s it. That’s even after I told the nurse to shoot some Benedryl into my IV to knock me out! By the way, Benedryl burns going in.

The first day after surgery, the nurse took out the cath and told me I could go home when I peed a magic amount of pee. Do you know how hard it is to pee after being cathed? For me, it takes a lot of effort. I forced out enough to get to go home. Once home, I cried on the toilet for 35 minutes trying to empty my bladder. It took a good day to get all that back to normal.

Then came the constipation. When you’re taking percocet round the clock, you get REALLY backed up. Plus, you’re afraid that one wrong push is going to burst apart your insides or something. Not a good combination. I tried stool softeners and laxatives. I tried taking my reading glasses in the bathroom and catching up on the latest editions of Family Fun and Parents magazine. I tried changing my positions and putting my legs up, leaning back, contorting my body in the strangest angles that the pain would allow.

Finally, I went. Yay! Never, ever, ever in my life have I been so happy to go number two!  Then it started all over again. Two days without going, one day going and feeling like having a party, and so on. My poor hiney hurts. Hey, I promised honesty!

Aside from major bathroom challenges, the pain is intense. I ended up getting behind it instead of in front of it because I was afraid I’d run out of pain meds before the pain stopped. In my area, we have a major opiate addiction problem, so doctors are really stingy with meds even when people really need them. I tried to ration them so I’d make sure they lasted longer. Here’s my advice: don’t do that. Take the freaking medication as directed, even if you think you’re so tough you can handle the pain, because once that pain gets ahead of you, there is no going back.

I told my good friend, Adelina Rosa of Matter of Cents, that it felt like someone was playing hockey inside my abdomen. She said that was a good way to describe it. It’s pretty much the only way I can think of to explain the level of pain you’ll feel when you recover from a hysterectomy that first week. Sometimes it’s worse that others. There were times that I could sit at the computer for a good half hour before feeling like I was going to keel over and die. Other times, a five-foot walk across the room left me exhausted.

Which brings me to that point: you will be tired. Super freaking tired. The anesthesia takes a few days to completely wear out of your system, so expect to spend the first half the week after surgery in a complete haze. I somehow managed to write a post that was due during that time and make it completely coherent. To me, that’s practically a miracle. I also did a Twitter party four days after surgery, again, a miracle. It took 5 days for my brain to suddenly feel clear.

After the first five days, you start to feel almost normal. I mean, it still hurts, a lot. If you can manage to not end up with an infection of some sort (my surgeon told me I was his first patient in four years to get one), by the end of the first week you’ll be able to start functioning almost like a normal person. Of course, it takes a while for the pain to completely go away, and I’m not really at that point yet.

2018 Update: What to expect beyond the first days

So, it’s been almost 4 years since I wrote the first part of this post. I figured it’s way overdue for an update! Okay, you’ve made it through the first week, the pain is starting to subside, and you think life is getting back to normal. For the most part, it is. However, there are a few things that may come up even years later that surprise you.

First, if you kept your ovaries (like I did), remember that you’ll still have your hormones. While you won’t get your period anymore, you’ll still get all the emotional PMS symptoms once a month! I say to remember this because once a month you’ll feel like you’re going crazy…until you realize that it’s “that time” of the month! While you most likely won’t forget during the first few months, years will go by and you’ll suddenly forget, lol. You’ll find yourself bawling over something mundane like spilled milk, or snapping at your significant other for having the audacity to ask how your day is going. You’ll think “what is wrong with me???” You might even make an appointment to see a therapist! Then it will hit you: it’s “that time.”

It’s even harder to figure out when “that time” is when you start hitting menopause! I’m 42 now, and I can feel the symptoms. Hot flashes are weird, my friends. Like, one minute you’re freezing, and the next you feel like someone turned up the heat to 1,000 degrees. During the early stages, you can go months without PMS (although you might have other types of mood swings), then all of the sudden, you’re back to crying over spilled milk again. The plus side, though (and this is a HUGE plus): no more “climb the wall screaming in pain” cramps. I’ll take the surprise mood swings over that any day!

Babies will occasionally hit you where it hurts (figuratively speaking)

When I made the decision to have my hysterectomy, I swore I was done having babies. It took me 6 years to get pregnant with my son. I had severe preeclampsia and he was 8 weeks early. He broke his arm during delivery. I got an infected c-section incision and had to get my wound packed for 6 weeks. His conception and birth alone traumatized me for life. I couldn’t imagine doing it again…right up until having another child was taken completely off the table.

About 99% of the time, I’m really okay with that. I was 38 when I had my hysterectomy, so I was nearing the end of my baby making years, anyway. Still, every now and then, I’ll see a baby and get that pang, that sudden burst of sadness that there is absolutely no way I can bring life into the world again.

You won’t regret it

Even though I do sometimes get a little sad, I don’t regret my decision to have a hysterectomy at such a relatively young age. Before my hysterectomy, I’d spend days each month curled up on my bed sobbing and clutching my gut, waiting for the ibuprofen to kick in so I could start to function. Since my hysterectomy, I only experience that torture when I eat too much spicy guacamole! I can honestly say that I do not miss my uterus at all.

Do you have any other tips or experiences to add? Join the conversation in the comments section! Some fabulous ladies have already gotten the ball rolling!