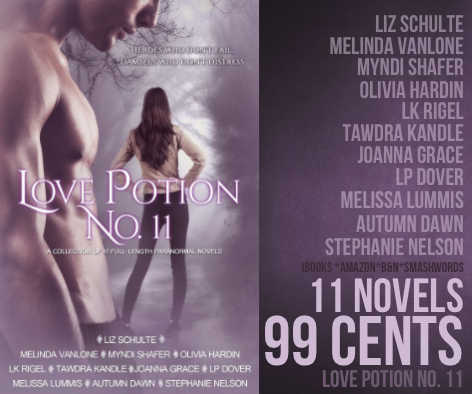 What do you get when you take eleven awesome paranormal authors, toss them into one box set, and turn up the heat?

This box set contains ELEVEN full-length novels from eleven authors. And right now. . .for a limited time. . .it’s only 99 cents.

Talk about a bang for your buck.

Secrets by Liz Schulte: While Olivia Martin observed life through her camera, the Abyss gazed back at her. She discovers mysterious men follow her around, people close to her are dying, and her dreams are no longer her own as she falls head over heels for a perfect stranger. A chance encounter leads to an obsession that could destroy everything she has ever known or loved. Olivia is about to find out there is a lot she doesn’t know and sometimes what you don’t know can kill you.

The Charmer by Autumn Dawn: Jasmine didn’t realize her friend Wiley was special until they were drawn into another world. Here Wiley is betrothed to the ruler of the Haunt, a wererace both dangerous and proud. Keilor is the master of soldiers, a man few would cross, yet he’d never met a menace like the little brunette his princess calls friend. Will Jasmine find the portal home, or will she find a werewolf of her own?

Forever Fae by L.P. Dover: He leans down, lips parted, and then our lips connect … We didn’t know that this one kiss has FOREVER changed the Land of the Fae. According to the Prophecy proclaimed many years ago, Princess Calista of the Summer Court is destined to change the Land of the Fae from the evil determined to destroy it. Her powers are phenomenal, and she secretly trains for battle with her handsome warrior friend, Merrick, who unbeknownst to her protects her heart as well, in hopes of keeping it for himself. At least, until the seductive Prince Ryder attends the Guardian Ceremony and instantly sends a fire burning through her veins and a connection so deep they both discover a love above anything imaginable.

Stronger Than Magic by Melinda VanLone: Water can be deadly, in the right hands. In a world of magic, hidden away from those who have no power, Tarian Xannon commands the natural forces of water, air, and fire. As heir to the Dolphin Throne, her job is to learn what it takes to lead—but she’d much rather forget the heavy weight of responsibility in the waves of the ocean. When Tarian is brutally attacked, she faces the shocking reality her talent, while strong, is no match for the demon-like creature. This power play for the throne ignites the Succession Ritual, forcing Tarian to make hard choices about the future of her unborn child, House Xannon, and the very fabric of magical society. As her defenses wane, his attacks grow bolder. All she knows and loves hangs in the balance. Tarian fights not only to keep the throne she thought she hated, but to accept her true place in the world. Will her power be enough? Or are some things stronger than magic?

Give Me by L.K. Rigel: A Romance Reviews top pick. All she wanted was a vacation … but Dumnos offered a new life. Lilith Evergreen has always lived in the California desert, but when she receives an antique ring as a gift, she dreams of a castle by the sea, a magnificent tree at cliff’s edge, and a mysterious woman who calls her to Dumnos, a land of mist and rain. Cade Bausiney is the future Earl of Dumnos, but at present he just wants to bolster the local economy with a scheme to increase tourism. When he meets Lilith, a tourist from the other side of the world, his attraction to her is overwhelming ~ but are the feelings real or magically induced?

Taming the Wolf by Stephanie Nelson: Attacked by a wolf while hiking, Anna Avery’s life just got a little hairier. Living in the Big Horn mountains in Wyoming, with a group of werewolves who are more animal than human, Anna must try to hold onto her human side. It’s not easy when the alpha continues to persuade her into his bed, while another wolf is chomping at the bit to become her mate. To top it all off, dead bodies are showing up and it just so happens that Anna was the last to see them alive. She’ll have to work to prove her innocence and taming the wolf who bites first and asks questions never.

Sweet Magic Song by Olivia Hardin: Belle Bittner was sold to the highest bidder when she was just a child, sought for the magic lying dormant in her blood. She grew up as the adopted daughter of a wealthy vampire couple, and serving the child-trafficking Org seemed her only option in life. But Belle has other plans, and she won’t let anyone get in the way of her escape, even if it means betraying those who try to help her. Desperate to stay free of an evil vampire who means to possess her no matter what, Belle decides she can use the protection of the flirtatious faery named Roon. The two of them flee to the faery realm where Rooney believes he can better protect her. What he doesn’t know is that taking the beautiful siren through the golden door will set off a cataclysm of events that will threaten the fabric of both the human and the faery worlds. Separating myth from fact to decipher the truth about her powers could mean the destruction of the new life Belle’s trying so hard to build.

Enlightened by Melissa Lummis: Loti Dupree is about to learn that karma’s a bitch. After her husband’s sudden illness and mysterious death, ominous nightmares and psychic attacks have her running for her life—and straight into the arms of a dark and broody vampire called Wolf. In his world of closely guarded secrets, every answer she uncovers leads to more questions. Sexy distractions teeter between dangerous and too good to quit, while Loti struggles with both losing and finding herself in the arms of this mysterious creature. When the attacks intensify and friends become casualties, she must face the truth whether she wants to or not. Someone out there will stop at nothing to kill her and only the vampire named Wolf and a destiny she isn’t prepared to embrace stands between her and an early grave.

Undeniable by Tawdra Kandle: For Rafe Brooks, running from a broken heart means losing himself in alcohol and women. Lots of women, none of whom will remember him, since he has the ability to manipulate their minds and make them forget. Numbing the pain works until he meets an irresistible redhead with secrets of her own. She offers him the opportunity to join forces with an organization that will use his powers for good rather than his own amusement.

Jocelyn rocks his world with her unapologetic passion and makes him believe for the first time he just might survive heartbreak.

When a mission takes the two of them undercover to infiltrate a commune with suspicious activity, they discover it’s just the tip of a plot to cause world-wide anarchy. Hiding their extraordinary powers and real identities is crucial to staying alive.For Rafe and Jocelyn, when life is uncertain, love is undeniable.

Hanna, Hanna, One-and-Two by Myndi Shafer: Twenty-two year old Johanna Cochrin’s world is broken. Eating mists ravage the plains, and wilder-than-most hunt and kill in all but the most protected lands. Sickness shadows the populace, and the minds of men are slipping. And even though there’s something she would do about it, she can’t. She’s a prisoner. After witnessing her brother’s brutal murder, she’s spent the better part of the last decade in self-imposed silence, hell-bent on taking his secret to the grave. Even if that means living the rest of her life confined in a remote government compound. But when she is kidnapped from that compound, her silence becomes a liability. Annabel Haier, the ruthless dictator of a fragile government, will stop at nothing to see Johanna back in her clutches and sacrificed to a time-altering Device. If Johanna is to survive, she must learn to trust people she has never met and share the secrets she never meant to share. And if she is to discover her place in the world, she must come to terms with her own mortality – a thing that has the power to save, or condemn her broken world.

Divine Destiny by Joanna Grace: Avery McClain is normal. Or so she thinks. Until her life is shattered and she is rescued by a Thracian warrior. He takes her to the Haven, a realm of safety for the magical race of Olympians. There she discovers her life was meant for a higher calling as the mate of an Olympian Prince. Her choice will change everything. Ryse Castille has one job: convince Avery to step into her role as a Divine Grace. As with any mission, there are obstacles to overcome. Including the fact he is captivated by her. Of all the gifts the gods have given him, romance was not included. But Avery belongs to him and he will stop at nothing to protect her. The enemy might be closer than they think. Can Avery find the courage to embrace her destiny? Or will evil separate them for eternity?

Meet all the authors

and enjoy fun tidbits from the books by visiting a