How to Enjoy New York City Without Going Broke 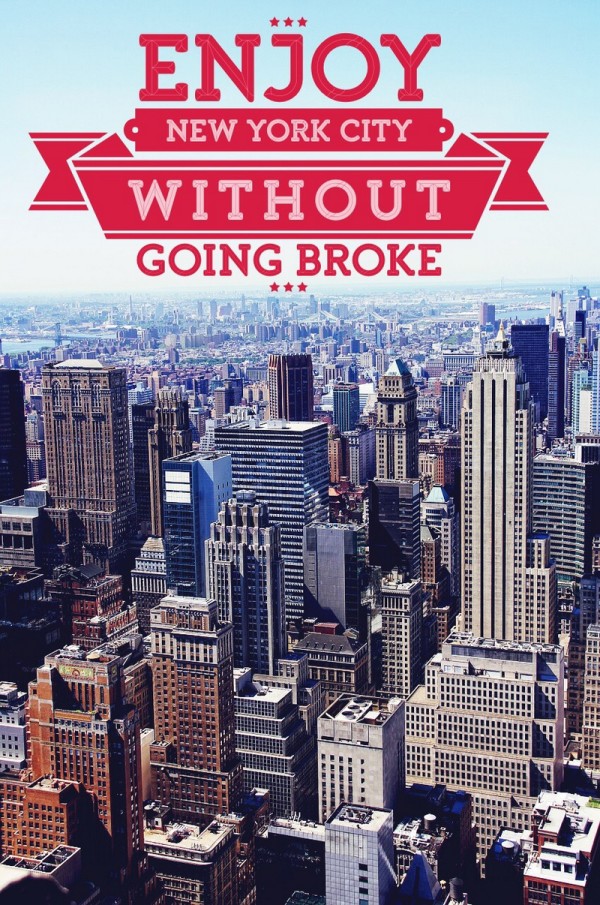 New York City is one of the most exciting and popular vacation destinations for people who love a fast-paced getaway. I’ve lived 2 hours away from it most of my life, so I’ve seen quite a bit of what it has to offer myself. With some of the most expensive and high-class stores in the world, streets filled with lush theaters and jewelry stores so decadent they make movies about them, it’s super easy to go broke in New York. Did you know, though, that’s it’s also pretty easy to enjoy New York City on a very itty bitty budget? It’s true! I’ve been to New York City with a full bank account and also with just enough to cover the cost of subway fares, yet still managed to have an equally thrilling time no matter how much I had to spend. Today I’ll share some of my favorite ideas for enjoying New York City on a budget!

Fun Things to Do In New York City on a Budget

American Museum of Natural History: Did you know that the $22 entrance fee is a suggestion? If you order tickets online, that’s the price you pay. However, you can actually pay whatever price you want if you get your tickets at the museum. Keep in mind that your admission fee helps pay for the museum’s upkeep, so please be fair. If you really can’t afford much, though, you can pay a few dollars and still visit this spectacular museum. Staten Island Ferry:  Want to see the Statue of Liberty, the Brooklyn Bridge and other lovely views from the water? Ride the Staten Island Ferry for FREE! Ever since 9/11, the whole Statue of Liberty experience has been pretty much reduced to “wow, I touched the base.” That’s IF you stand in line for hours, make reservations days earlier and pay $12 per person. In my opinion, it looks better from the water anyway.

Free Tours of Central Park: Central Park is huge and free. If you want to see all it has to offer, you can sign up for a guided walking tour through the park. Most of them are free. Just make sure it’s actually through the park and not another site that looks like the park’s site. THIS is the right link. If you’re not into guided tours (I prefer to tour on my own schedule), the official site also has plenty of fantastic self-guided tour itineraries. Or just grab a map, pick a spot and start strolling! You could spend an entire day in Central Park and never spend a dime. Way Off Broadway: Want to take in a show but don’t want to pay the Broadway ticket prices? Find one of the smaller theaters putting on performances and get tickets to something totally unique! Just pick up one of the several free papers floating around the city to see what’s happening.

Free festivals & events: You know how every day is a national “something” day? Well, it seems like just about every day is some sort of celebration in NYC too. These events usually include plenty of live music and entertainment. You can also find loads of relatively inexpensive food if you look carefully.

Watch street performers: The city streets are filled with artists singing, dancing and playing beautiful music in the moonlight. Stop and pay attention. My favorite are the people who look like statues. They creep me out, but they’re so cool at the same time! Be a member of a studio audience: Quite a few shows are filmed in NYC, especially late night shows. Most are filmed during the day. If you call ahead of time, you can get free tickets to be in the audience. My ex and I were in the David Letterman audience about 12 years ago. It was pretty neat!

Dessert Taste Tour: It’s easy to drop a fortune on decadent meals at the top New York restaurants. Instead of making a list of all the places you want to dine for dinner, choose one that’s at the top of your list. For the rest, go for dessert! You can also make a list of the top coffee shops in NYC and make your way through those, sampling a great cup of coffee from each one. That’s what I’d do! Of course, I’d “coffee tour” my way across the world if I could!

Old-Fashioned Sight-Seeing: Never underestimate the fun in good old-fashioned sight seeing! Pick an area- say Times Square- then spend the day walking and exploring. Go back to your hotel, then pick another area the next day. Snap loads of pictures to make your own souvenirs and just take in all the amazing views. Sample Sales: One of the coolest things about shopping in NYC is the sample sales. No one really knows where they’re going to be too far in advance, but plenty of bloggers and magazines have the inside scoop at least a few days ahead of time. Search “Sample Sales New York” along with the dates you’ll be there and see what pops up. Keep searching every day. You can find tremendous discounts on hot designers at these sales! I’m talking major discounts, like sweaters dropped from $160 to just $20!

Where to Stay in New York City on a Budget

Note: This portion of the post is brought to you by Residence Inn by Marriott. I am part of the Resident Mom” Blogger Ambassador Program. All opinions are my own.

With four locations right in New York City and eight more within a 20-mile radius, Residence Inn by Marriott is the ideal place to stay to enjoy New York City on a budget. Not only are the rooms reasonable for the area (with rates starting under $180 a night, they fall solidly in the average rate range), but you get a lot more for your money. In fact, you’re not getting a “room” at all, but rather a suite that’s more like an apartment, complete with a separate sleeping and living area.

Amenities vary by property, but all of them offer a free hot breakfast, which saves you money on one complete meal each day. Every room also has a kitchenette, so you can cook your own meals. If you are driving in to the city, I recommend stopping at a grocery store outside the city and stocking up on ingredients for a few meals to save even more money. I’ve never grocery shopped in the city, but apparently it’s expensive because every weekend tourists from the city flood our stores filling their carts. I can’t imagine they’re eating THAT much in one weekend!

The locations in the city are super close to many of the top places to visit, which saves you money on cab and subway fare. Choose one closest to the bulk of your planned activities to maximize your savings.