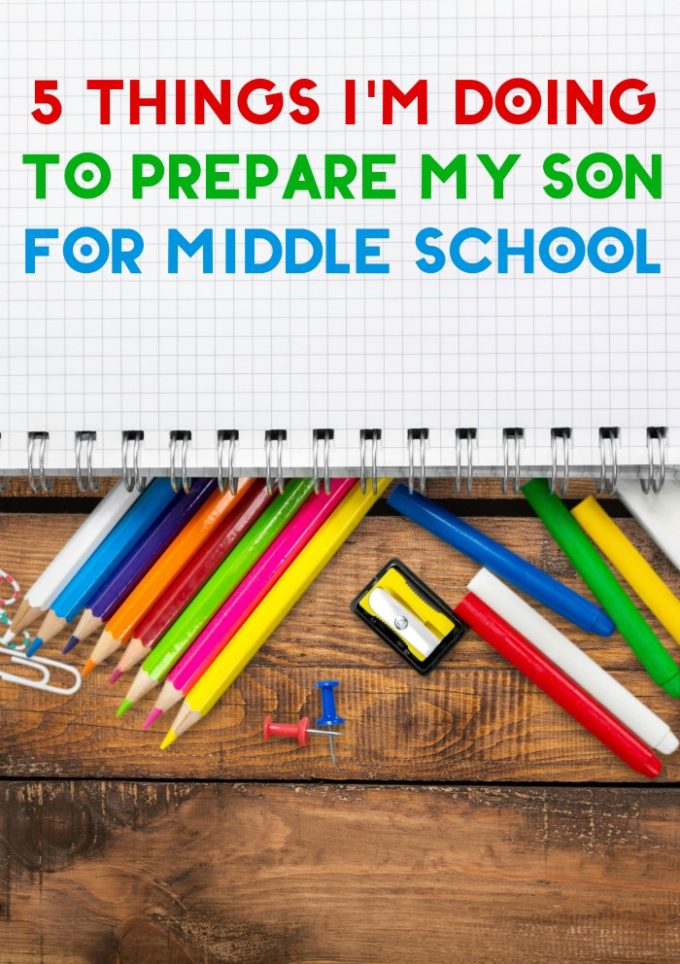 Jacob is moving up to middle school next school year and I’m spending the summer doing a few things to help him prepare. It’s a pretty big change. He’ll be going from having two teachers to having one for every single subject. He’ll be meeting new kids, as all the elementary schools in the district combine into one middle school. The school like that he knew from K-5th grade will totally shift. It’s like starting over someplace new entirely. Needless to say, he’s a bit nervous. We were talking the other day about all the changes. He shared with me a few things that he’s most worried about, then asked me “do you think anyone else is nervous?” He’s afraid that he’s the only one. I assured him that most of the other kids in his class are sitting at home talking to their parents about the very same things. I told him we’d do a few things this summer that will help prepare him. I thought I’d share those with you, in case anyone else is going through this new phase in their child’s education.

How I’m preparing my son for middle school

Of all the things I thought my son would worry about in middle school, locker combinations seem to be the biggest. He’s very worried that he won’t be able to open his locker or remember the combination. Fortunately, this is the easiest to fix. We’re practicing on combination locks at home. At first, I thought I’d just hand him a lock to practice with. Then I remembered that sometimes you have to reach up or bend down to get to your locker. So I’ll position it just like it will be when he gets to middle school.

As far as helping him remember it, I really don’t think he’ll have a problem. He’s remembered his school ID number since he was 5. I don’t even know it without looking. Still, there are tricks to help. Things like writing it as a math problem in one of his notebooks (like 10-13+12) or making up a rhyme in his head. I always remember numbers by assigning a tune to them. Every phone number I know plays out as a song in my head, with each number being a different note. It’s weird, because I’m not even remotely musical, but that’s how it’s always worked for me. Numbers have sounds.

I’m not picking out his clothes anymore

Middle school is where kids really start to explore their own sense of style. When I was in 8th grade, I really started finding my own fashion sense (and I do mean my own). It’s so important to let them be in charge of that style as much as possible.

A couple of weeks ago, I said to Jake that he needed to come with me to pick out his summer clothes, since I need him to try things on. He said “FINALLY! About time! Everyone knows you’re not supposed to let your mom pick out your clothes for you!” HEY! To be fair, I pick out pretty awesome clothes. I’m a punk rock girl, how am I not cool to my kid?

Jacob will pick out all of his own clothes for middle school, right down to the socks he wears. Within reason, of course. I’m sorry, I’m not spending $50 on a hoodie made by some YouTube gamer that he’s crazy about. Not going to happen. He also has a dress code, so he’s stuck with certain styles for school clothes. He’ll have price limits, and I’m not driving to Istanbul to buy a cool pair of shoes, but as much as possible, he’ll be in charge of his own style.

I’m being more mindful of his privacy on social media

Now that Jake is going into middle school, I’m being more mindful of the pictures I post of him and the things I say on social media. I may think something is adorable or funny, but other kids may find it as fodder for bullying. With the popularity of social media these days, every last one of us has a “public” image and a “private” image.

That doesn’t mean I’m we’re not ourselves or that we’re totally different in real life.  I’m always just me, but that doesn’t mean I want you to see “just me” sitting here in my laundry day clothes with my hair looking all sorts of crazy! Kids feel the same way, especially middle-graders.

We’re talking about the “changing in front of others” thing

The very worst thing about middle school (and high school) for SO many kids: gym class. Jacob LOVES gym class, but he’s absolutely horrified by the fact that he’ll have to get changed in the middle of a locker room in front of other kids. Remember I said Jacob is picking out his own clothes right down to the socks? Well, this is why. If kids even wear the wrong type of underwear in the locker room, they’re potential targets for bullies.

He’s learning about growth and development in health class, but I will make sure to drive home the point that, at that age, everyone is developing at a different rate. For those with daughters, this conversation is especially important. I was rather busty by the time I hit middle school. It was hard being one of the only girls in the locker room wearing a bra at 11.  I’ll also make sure Jacob has all the hygiene tools he needs to feel more comfortable changing in the locker room.

Middle school is the worst for bullying. You’d think it’s high school, but statistically speaking, more kids are bullied in middle school than any other grade levels. Jacob has already dealt with bullying throughout elementary school. Sadly, the school doesn’t have the best track record of doing anything about it. We’re spending more time talking about how to react to bullies, how to report it, what he wants my role to be if it happens.

I don’t want to call the school every time someone says something mean to my son, I think that could make it worse. At the same time, I won’t sit back and watch him be miserable again like he was for the last three years at his current school. I want to make sure we both have the tools to handle it at the middle-grade level, should it continue to be a problem.