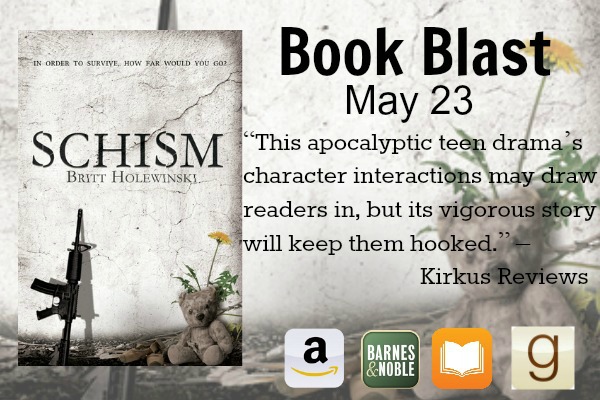 “Schism” is the first book in a new dystopian trilogy that tells a tale of survival, of good versus evil, and of constructing a future with only memories of childhood.

A government-created virus is accidentally released before testing is complete and within weeks it kills six billion people, children are the only survivors. Andy Christensen and her two friends travel across the country searching for a safe place to live, but nowhere, it seems, is capable of resurrection.

“SCHISM is an engrossing page turner that skillfully deals with dark subject matter in a compelling, through-provoking manner…The writing is crisp and clear, and the novel’s details are well-researched, down to the names of local roads and landmarks and the types of technology used by the survivors.” -IndieReader.com

“This apocalyptic teen drama’s character interactions may draw readers in, but its vigorous story will keep them hooked.” – Kirkus Reviews

“Born in Boston, Britt Holewinski lived in six different houses across the United States during her childhood,

sparking her interest to write about characters who must continually adapt to new situations and locations.

Early on, she dreamed of becoming an astronaut; however, shortly after completing her graduate degree, she was offered a job with the CIA. Her years working for the Agency opened her eyes to the world we live in and gave her rare glimpses of what living in a crumbling, post-apocalyptic world might be like.

In her spare time, Britt loves to go hiking anywhere with a view, learn French, and visit historical Revolutionary and Civil War sites along the East Coast.”