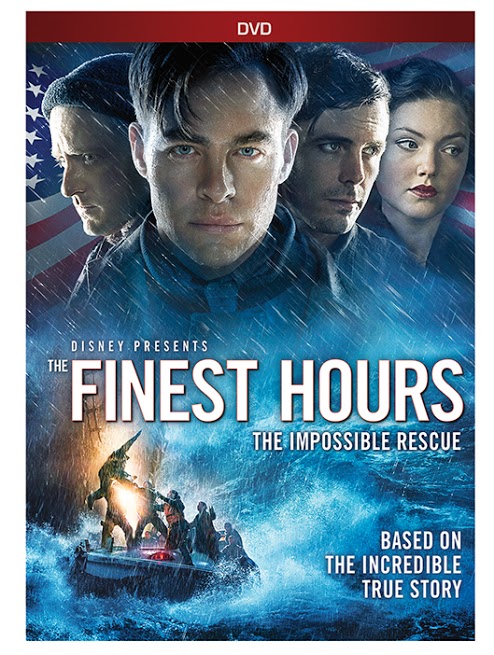 This is a sponsored post written by me on behalf of The Finest Hours. All opinions are 100% mine. In 1952, the U.S. Coast Guard embarked on one of their most daring and extraordinary rescues in their history, when a massive winter storm ripped apart an oil tanker off the coast of Cape Cod. Over 60 years later, Disney brought that story to the big screen in the powerful film, The Finest Hours, detailing the thrilling action and impossible stakes in an incredible 3D and Imax experience. The amazing action sequences and intense dramatic scenes definitely appeal to the adventure-lovers in all of us, but the true power of the film comes from the underlying themes of brotherhood, love and the incredible strength of the human spirit.

Brotherhood, Love & Strength of Spirit: The Finest Themes of The Finest Hours

In honor of the digital release of The Finest Hours on Blu-ray™, Digital HD, & Disney Movies Anywhere on May 24, I want to talk more about those deeper underlying themes that really power the film. It is these things, after all, that really drive all of our nation’s heroes, from the Coast Guard to our firefighters to the men and women of the military.

In The Finest Hours, four men volunteer to set out to rescue the broken oil tanker in a 12-seat boat. They know right off the bat that it’s going to be a difficult rescue mission. Why else would most of the rest of their crew hit the road and make themselves scarce?  They know that they’re heading out in a much smaller boat than they’d usually use for rescues, and that the sea isn’t feeling particularly kind. They know all this, yet they step up. Why? Honor and brotherhood. Those 30 men out there aren’t just “some guys” in a bad situation, they’re other sailors. Brothers. As a former Navy wife, niece and granddaughter, I know very well how deeply the bonds of brotherhood (and sisterhood!) run through the heart of sailors. When one is in danger, they all rally. So many of the men in my family served at sea, starting with my grandfather during World War II. The actors of The Finest Hours got to experience a taste of this deep bond during filming, something they reflect upon “Brotherhood,” one of the bonus features. While the action is the heart of the movie, the love story is like the soul. It’s easy to see that the burgeoning love between Bernie and Miriam plays a strong role in keeping Bernie going. My uncle was a Sailor for 20 years and spent many, many months on ships out in the middle of the ocean. I think knowing that my aunt and his three boys were waiting for him back home really helped him get through even the roughest of times (and roughest seas). My uncle, returning home to his family after months away at sea.

The incredible strength that we all have within us also runs deep throughout the entire film. These four men HAD to have strength. Remember, it was 4 of them on a tiny lifeboat against a blizzard-ravaged frigid cold sea. Their mission: save over 30 men from a much larger ship that was literally torn in half by the bad conditions.

Living in the Northeastern US, I’ve been through my share of blizzards and massive snow storms (for those in sunnier states, there is a difference and it’s not the amount of snow involved but rather the amount of wind). This was the result of just one weekend of snow one year. FYI, Coop is not a small dog and those aren’t miniature chairs! The howling wind and frigid temperatures are enough to keep me hiding inside until it’s over. Can you imagine what it must have been like to be out in the ocean in something like that? Yet these guys never gave up. That takes more than just courage or bravery. It takes true strength and belief in each other.

The Finest Hours  is beautifully based on the “Extraordinary True Story of One of the Greatest Rescue Stories Ever Told,” not just throughout the captivating and thrilling action, but also through the powerful bonus features. Even if you saw the film in theaters, you’ll want to grab the Blu-Ray or DVD to get a closer look at this incredible true story. One of my favorite bonus features, “Against All Odds: The Bernie Webber Story” is an incredible documentary that takes you to the beautiful close-knit seaside town of Chatham and gives you a more personal look at the heroic rescue. You’ll hear from people who were actually there in 1952 and learn more about the Coast Guard’s role in the area. For example, did you know that this particular patch of the coast is actually called the Graveyard of the Atlantic?

The Coast Guard rescues hundreds of fishermen a year off the coast of Cape Cod. It’s insider information like this that makes the story of The Finest Hours even more incredible. To Bernie Webber and his men, the rescue of the SS Pendleton was both an incredible feat of heroism and just another day at the office.

You’ll also hear from Bernie and Miriam’s daughter, which strengthens the underlying love story in The Finest Hours. To me, bonus content like this really helps us to connect to the characters and understand the film better. It’s one thing to know that a movie is based on a true story, another thing entirely to truly understand that as we watch. This isn’t a made up “man versus nature” adventure film or another super-hero flick. These men really experienced everything we see on the screen. That makes them heroes in the truest sense of the word.

Speaking of those true heroes, in “The Finest Inspiration: The U.S. Coast Guard” bonus feature, you’ll actually get to meet some of those heroes who put their lives on the line for others every single day. You’ll also get to hear a Coast Guard Member recount an incredible rescue of his own in “What is your finest hour?” Other features include Deleted Scenes and Two Crews, where Chris Pine and Casey Affleck talk about their insights into the real-life men who led their crews. Get The Finest Hours on Blu-ray™, Digital HD, & Disney Movies Anywhere on May 24 and celebrate this amazing true story of brotherhood, love and strength of spirit.