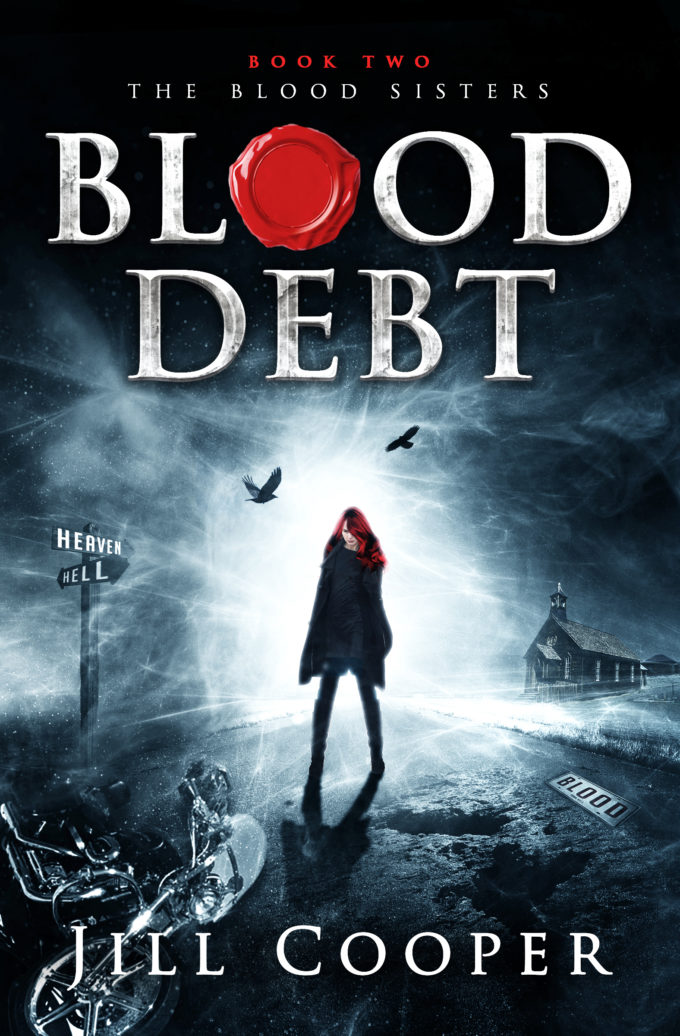 The queen of the underworld has a new play toy and her name is Jessica Blood.

Bad boy Duncan Jasper and passive healer Amanda Blood are on the run for their lives with a horde of demons on their tale. The queen of the underworld, Lourdes, wants Amanda to free Lourdes from her prison and it’s all on Duncan to keep this from happening.

But Amanda’s soul is fractured and bleeding thanks to the torture she suffered at the hands of the high-level demon, Vaughn. Now a painful ritual is her soul’s only chance at survival. If Duncan fails, Jessica Blood may never be free from the chains that bind her to Lourdes.

Demons swarm to their location and Jessica walks right into a trap they’ve set for her. But to cure her sister, Amanda will have to embrace the pain and welcome the beauty of death.

All before they get ready to stand off against Lourdes and the demons of hell, coming to claim their souls.

Hold onto your seats! Long-held family secrets and heartache are about to be revealed.

Check out an excerpt from Blood Debt!

Stay back! Keep the demons at bay, but stay back.” Amanda’s hands were both glowing gold, but that was impossible. She wasn’t able to generate power in both hands.

“Ready yourselves!” Jessica stood steadfast, gripping her wrist to steady the sword as her foot met with the carpeted cushioned steps leading up to the dais.

Time to take what she came for.

Amanda slammed her open palms onto the top of the altar. It came alive and threw white sparks in all directions. The electrical current traveled in all directions; to the four corners of the church, up the arc behind the altar and across the crucifix; it raced up the walls toward the ceiling. Charging straight into the chandelier right above Jessica’s head.

It began to shake and a groan of power built up, glowing evanescent. The hum was building, charging something that wouldn’t be able to contain it for much longer. Jessica didn’t have much time. She darted out of the way. The flaming sword vanished deep inside her body and she charged at Amanda with outstretched hands.

Amanda’s face was set like stone, her eyebrows furrowed tight like a Neanderthal, but she didn’t flinch. Not the little girl that Jessica remembered her being. Where was the fright, the vulnerability?

That was the trap, wasn’t it? It was too late to stop herself, Jessica’s hands slammed into Amanda, as Jessica seized her throat, a flow of power traveled from sister to sister. Jessica groaned as Amanda’s energy traveled through her skin. Lourdes, deep in the underworld, screamed too, sending torment through Jessica’s body.

Amanda moaned and they both fell to their knees together. Demons charged up the steps and around the sides. They closed in on Amanda like a football huddle, but their advance stayed. The chandler erupted in a brilliant display of light. Electricity flowed freely through the church, racing along the ground in search of its prey.

Hungry it floated back and searched through the interior walls of the church, looking for its targets. It lit up the demons like the fourth of July and they crashed to the ground before their bodies exploded into green mist.

Jessica was rolled over on the ground by her dear sister. Amanda’s chest heaved for air. “Don’t fight me on this, Jessie.” Amanda pleaded, holding up a hand. Her power grew between her fingers, intertwining until it formed a tightly knit ball of swirling light.

Eyes lidded, Jessica shook her head. “You really think you can defeat us?”

“Us?” The quiver in Amanda’s voice was evident.

Outside motorcycles hummed. More demons were about to crash their party. Amanda inhaled with fright and Jessica took that moment to slam Amanda under the jaw with her open palm. Amanda fell backward, the arc of her back cracking on the step.

“Amanda!” Duncan screamed and it was his voice that steadied Jessica’s hand.

“Meet the demons outside. We have to protect the circle, Duncan!”

Duncan, and even the priest left the protective confines of the church and Jessica smirked at them. “Fools,” she hissed as the sword grew out from her arm. Amanda’s lips were drawn together and Jessica recognized the tired wrinkles around her eyes. “They really think you can take me on your own? You’re barely powerful enough to toast bread right now.” Jessica laughed a rolling mocking tone. “You’re so weak, you’re going pasty, girl.”

I could write this in the third person. I could tell you what I like, where I was born, and what my favorite things are.

But instead, I’ll say I don’t want to write like everyone else. I don’t want to craft stories you’ve read a thousand times before. I want my novels to be a cinematic experience, blending themes, genres, and situations unlike any you’ve ever read.

I want to break the rules. I want you to break out in a cold sweat as you read my books out of fear, love, and excitement. I want my books to be an experience. When you finish, I want you to feel something. Good or bad.

If you do, then I’ll have succeeded. If not, I’ll keep trying.