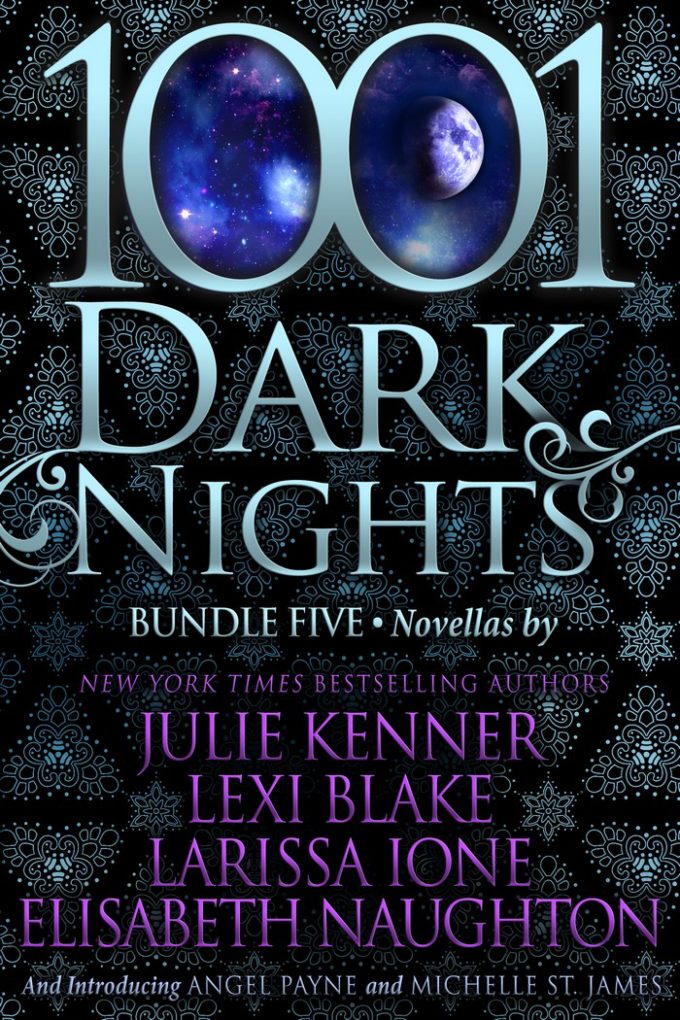 Every Dark Nights tale is breathtakingly sexy and magically romantic.

CARESS OF PLEASURE: I’d thought that he was mine, the dark, arresting man who commanded not only my body but my heart. Dante had swept into my life, and I’d succumbed to the burn of passion in his arms. I’d believed we had a love that would last forever, but he’d shattered my dreams and broken me into pieces when he’d walked away.

ADORED: Mitch Bradford knows he’s not good for any woman—especially not his best friend’s sister. Laurel Daley knows what she wants, and her sights are set on Mitch. She knows he just needs a little polish to make some woman the perfect lover. She intends to be that woman, but first she has to show him how good it could be.

HADES: Cataclysm was kicked out of Heaven and is now a fallen angel. All she wants is to redeem herself and get back where she belongs. When she gets trapped in Hades’s Underworld prison domain with only Hades to help her, Cat finds that where she belongs might be in the place she least expected…

RAVAGED: Ari has one singular focus: revenge. His guardian brothers all think he’s dead, but he is alive and chipping away at Zeus’s Sirens every chance he can. When he abducts the wrong female and his identity is finally exposed, it will take the courage of one woman willing to stand up to a warrior who’s become a savage to rein Ari in.

NAUGHTY LITTLE GIFT: From the moment MishellaSantelle locks eyes with Cassian Court, she can see the man beneath the power…the bruised soul for whom hers has been destined. When six months of her life are bargained to Cassian in a multimillion dollar contract, Mishella is helpless against the reaction of her body and soul to this man.

THE SENTINEL: Determined to maintain the friendship that has been her rock since childhood, Diana Barrett resigns herself to keeping her distance from Leo Gage. Leo has worshipped Diana Barrett since they were kids, but she can never know that. When Diana witnesses a murder, she goes to the only person who has ever made her feel safe. Now Leo and Diana are on the run.

Julie Kenner (aka J. Kenner and J.K. Beck) is the New York Times, USA Today,Publishers Weekly, and Wall Street Journal bestselling author of over forty novels, novellas and short stories in a variety of genres.

Praised by Publishers Weekly as an author with a “flair for dialogue and eccentric characterizations,” J.K. writes a range of stories including super sexy romances, paranormal romance, chick lit suspense and paranormal mommy lit. Her foray into the latter, Carpe Demon: Adventures of a Demon-Hunting Soccer Mom

by Julie Kenner, is in development as a feature film with 1492 Pictures.

(as J. Kenner), reached as high as #2 on the New York Times list and is published in over twenty countries.

J.K. lives in Central Texas, with her husband, two daughters, and several cats.

Larissa Ione is a New York Times and USA Today bestselling author. An Air Force veteran, she traded in a career as a meteorologist to pursue her passion of writing. She now spends her days in pajamas with her computer, strong coffee, and supernatural worlds. She believes in celebrating everything, and would never be caught without a bottle of Champagne chilling in the fridge…just in case. She currently lives in Wisconsin with her U.S. Coast Guard husband, her teenage son, a rescue cat named Vegas, and her very own hellhound, a King Shepherd named Hexe.

Elisabeth Naughton is a New York Timesand USA Today bestselling author. From Elisabeth: “I was never one of those people who knew they wanted to be an author at the age of six. I didn’t have imaginary friends. I didn’t write stories in my journal or entertain my relatives by firelight after Thanksgiving dinner. For the most part, I was just a normal, everyday kid. I liked to read, but I wasn’t exceptional at it. And when my teachers complimented me on my writing abilities, I brushed them off. I did, however, always have a penchant for the unique and absurd. And as my mother told me all throughout my childhood, I should have been an actress—I was a drama queen before my time.

“Years ago, my husband bought me Scarlett: The Sequel to Gone With The Wind. If you ever saw the book, you know it’s a long one. I sat and read that thing from cover to cover, and dreamed of one day being a writer. But I didn’t actually try my hand at writing until years later when I quit my teaching job to stay home with my kids. And my husband? After that week of reading where I neglected him and everything else until I finished Scarlett, he vowed never to buy me another book again. Little did he know I’d one day end up sitting at a keyboard all day drafting my own stories.

“My writing journey has not been easy. I didn’t just sit down one day, decide I was going to write a book and voila! sell my very first attempt. As most authors will probably agree, the path to publication is filled with hours of work, pulling all-nighters I thought I’d given up in college, sacrifices, rejections, but a love I discovered along the way I just can’t live without. Instead of a big, thick book to read by lamplight (I do read much smaller ones when I get the chance), I’ve traded in my reading obsession for a laptop. And I’ve never been happier.

“I’m one of the lucky ones. I have a wonderful family and fabulous husband who put up with my writing—and obsessive personality—even when life is chaotic. More than once my kids have been late to swimming or baseball because I needed just five more minutes to finish a scene. Their support and encouragement mean the world to me. I also have amazing friends and a support network I couldn’t survive without. So to all of you out there who have encouraged me along the way, sent me emails and fan letters, phone calls and congratulations, I just want to say, thank you. You make this whole writing gig that much more enjoyable. I truly wouldn’t be here without you.”

USA Today bestselling romance author Angel Payne has been reading and writing her entire life, though her love for romances began in junior high, when writing with friends on “swap stories” they’d trade between classes. Needless to say, those stories involved lots of angst, groping, drama, and French kissing.

She began getting a paycheck for her writing in her twenties, writing record reviews for a Beverly Hills-based dance music magazine. Some years, various entertainment industry gigs, and a number of years in the hospitality industry later, Angel returned to the thing she loves the most: creating character-based romantic fiction. Along the way, she also graduated with two degrees from Chapman University in Southern California, taking departmental honors for English, before writing five historical romances for Kensington and Bantam/Doubleday/Dell.

Angel found a true home in writing contemporary-based romances featuring high heat, memorable alpha men, and the women who tame them. She has numerous book series to her credit, including the Kinky Truth series, the Cimarron saga, the Secrets of Stone series (with Victoria Blue), and the popular W.I.L.D. Boys of Special Forces series, as well as several stand-alone titles. The C Suite series launches in 2016.

Angel still lives in Southern California, where she is married to her soul mate and lives on a street that looks like Brigadoon, with their awesome daughter and Lady Claire, the dog with impeccable manners. When not writing, she enjoys reading, pop culture, alt rock, cute shoes, enjoying the outdoors, and being a gym rat.

Michelle St. James is a pen name for critically acclaimed YA author Michelle Zink. Her first series, Prophecy of the Sisters (YA), was one of Booklist’s Top Ten Debut novels. Her work has also been an Indie Next selection and has appeared on prestigious lists such as the Lonestar List, New York Public Library’s Stuff for the Teen Age, and Chicago Public Library’s Best of the Best. Her books have been published in over thirty countries and translated into over twenty languages. She lives in New York with too many teenagers and too many cats.