7 Ways to Get Ready for the Heart of Hurricane Season 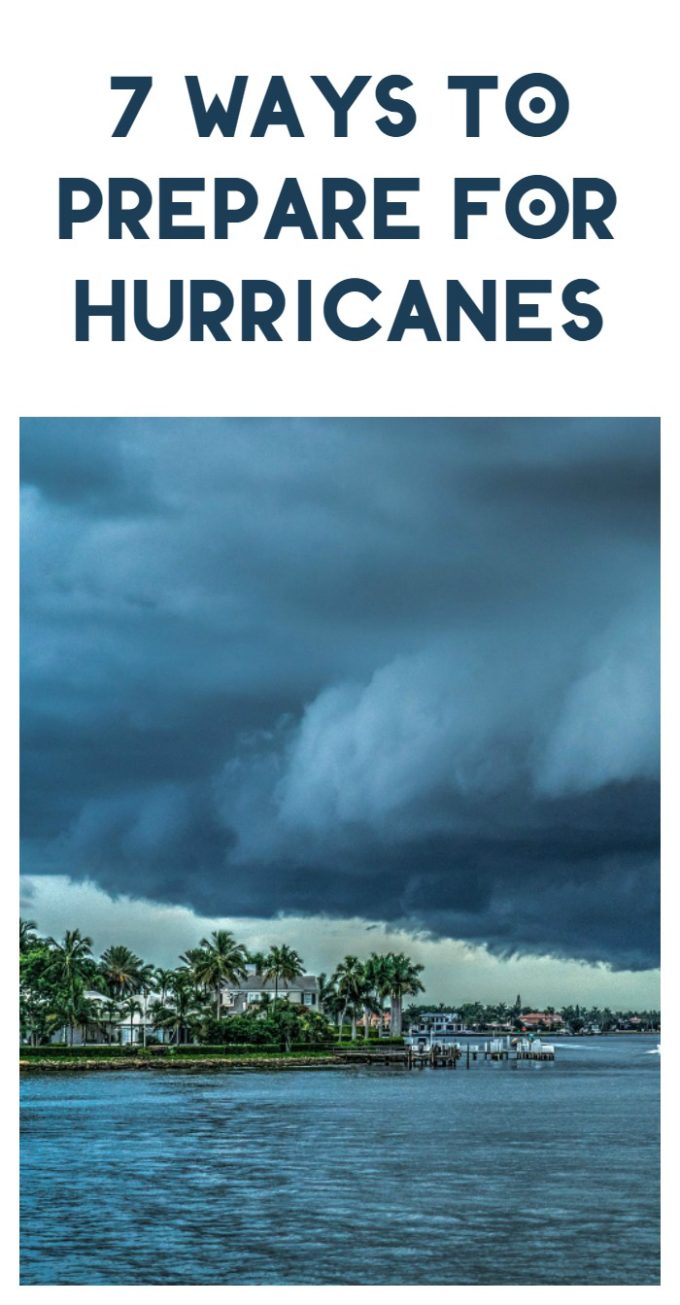 Up until a few years ago, I really never gave much thought to hurricane season. I live in the Poconos, for crying out loud. We don’t get hurricanes up here! At least we’re not supposed to! Unfortunately, either Mother Nature has flipped her lid or global warming has made a mess of weather patterns because the Poconos got hit two years in a row. Irene passed through and made a minor mess. Sandy came along a year later and wreaked so much havoc; I still have nightmares about the resulting power outage.  I was totally unprepared for it! Ever since then, I’ve been working on my “bad weather” preparedness.

7 things to help you prepare for horrible weather As I mentioned in my post on stocking up for realistic emergencies, I’m  not really a prepper. I don’t think zombies are coming or anything like that. Honestly, I’m not even sure we’ll see another hurricane up here. I’m hoping those were a fluke. Still, I live in a development off of the main road and my electric company has made it clear in no uncertain terms that my neighborhood is just not a priority during an extended power outage. We lived with a downed tree and wires on the side of our road for eight days before we ever even saw a truck in here. Even if I never see another hurricane, I’ll lose power at some point from snow storms, heavy rain or the odd overweight squirrel on the wires. It’s inevitable.  By preparing for hurricane season, I’m also prepping for all those other possibilities.

Even if I never see another hurricane, I’ll lose power at some point from snow storms, heavy rain or the odd overweight squirrel on the wires. It’s inevitable.  By preparing for hurricane season, I’m also prepping for all those other possibilities.

Set up emergency alerts on my phone and email

While much of hurricane preparedness takes place long before the winds pick up, you can’t really do the final preparations if you have no idea that it’s coming. Fortunately, with hurricanes, we have a fairly decent amount of time to get ready. Meteorologists aren’t flawless, but they can usually give us about a 48-hour head’s up.

Some people check the weather obsessively. I forget about it until someone says “are you ready for that big storm,” so I have alerts set up to let me know when it’s about to get really dicey.  I don’t like all those weather apps and desktop downloads because they’re riddled with spyware, adware and viruses. Instead, I just downloaded the app for my local news station and set it up to give me inclement weather alerts. You’ll want to make sure you ONLY set it up for weather, otherwise, it will constantly ding with “breaking news” about a turkey crossing a road or something inane. After a while, you’ll start to ignore the dings and alerts, rendering them useless. You can also set up email alerts for bad weather.

Make family plan and test it out

Remember when we were in elementary school and they had fire drills every month? The whole point of the drill was to test out the school’s plan. It’s not enough to just say “this is what we’ll do,” you have to make sure it works BEFORE disaster strikes. Ready.gov has a bunch of printable plans for parents, kids, commuters and so on. Print them out, fill in the details, then test your plan to check for flaws.

Along with your family’s plan, you’ll need to know how your city handles a disaster. Knowing where to go in an evacuation before you need to move makes it a lot easier to get there safely. Map out alternate routes to that headquarters in case a tree falls, or you end up in crazy tourist traffic (a likely scenario in my town). Even if you’re staying at home (if it’s safe), find out where the Red Cross plans to set up shelters. If you can get out of your house after the worst of the storm passes, you’ll want to know where to go for a hot shower and a decent meal.

Also, make sure you fill up your car with gas as soon as you know the disaster is coming. That way, you’re not stuck waiting in line for hours to get it once the panic starts (or stuck paying higher prices, because even though price gouging is illegal, it still happens quite a bit).

Load up on both drinking AND “cleaning” water

I’m sure you know about how you need to stock up on bottled water by now, so I’m not going to obsess about that detail with you. Just make sure you have one gallon per person per day. The point that I do want to drive home: stock up on “cleaning” water too. I have crappy well water that’s safe to drink but tastes like rotten eggs. It’s good for cleaning, though. I filled about 20 jugs and put them down in my basement so I can use it for flushing toilets, washing my hands, rinsing dishes and so on. My basement has a sump pump and we’re on a hill, so flooding isn’t a major concern for me. If you live on flat land, though, bring that water and other supplies upstairs before things get too crazy.

Get to know the radio

I haven’t listened to the radio in over ten years, ever since someone stole my antenna off my car back when I was a career college student. These days, most of us just listen to internet radio like Pandora or download iTunes songs for our own playlists. During bad weather, though, the radio is your friend. If your power goes out, you can’t rely on the television news. Take a moment to learn your local radio stations and write them down. That way, you can tune in on a battery-operated or crank radio and get updates. You’ll want to keep the essentials in a water-resistant bin of some sort. You have two choices here. You can either use the list of emergency supplies to make your own, or you can go the easy route and buy a premade kit. Live Prepared sent me one of their Deluxe Kits to check out. After photographing it and rifling through it to see what it included, I put that baby in a safe place until I need it. While I’m hoping I don’t, at least I know it’s there.

The Deluxe Kit comes with pretty much everything you’ll need to ride out a disaster for 72 hours, including: Everything fits perfectly in the included bin, and it’s not too big to grab and carry in a hurry. The kit costs $229, which is pretty great considering the food alone can get super expensive when bought separately. With low-end estimations based on the lowest prices for the items on the list (not necessarily the same item, but comparable), I figure all of these supplies would cost just about the same price, so you’re not losing money by buying a premade kit. It’s all high-quality stuff, so you’re probably saving money by going the convenient route. Check out more details and all the descriptions of the items here. Sometimes, you have to leave your home in a hurry during a hurricane, especially if you live in areas prone to flash flooding. Prepare in advance by packing a “go” bag filled with emergency supplies. In your main bag, pack things like a first aid kit, emergency food, a flashlight, ponchos and other supplies that you’ll need to get you through if you end up stuck somewhere. Make up smaller “go” backs for each child, too. Even younger ones can carry a small backpack with their favorite stuffed animal (for comfort), a change of clothes and a few light supplies. Just make sure your child’s backpack is around or less than 10-15% of his body weight to prevent back injury.

Do you have hurricanes or other types of severe weather in your area? What do you do to prepare?