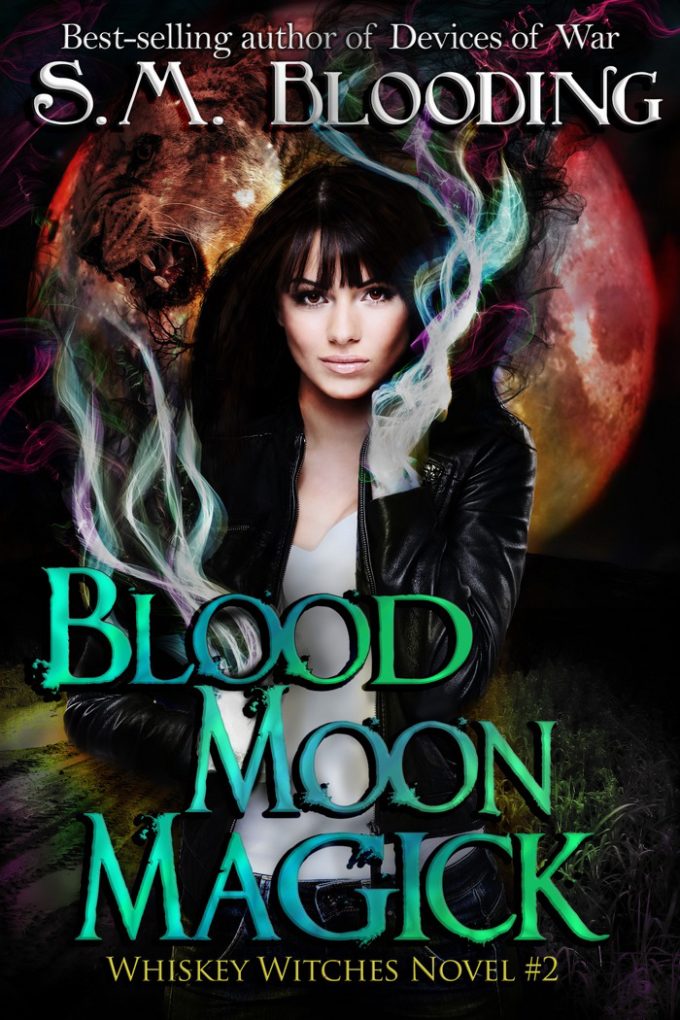 Detective Paige Whiskey has a lot on her plate. A gate to Hell is permanently seared into her soul and she has no way of controlling it. She let a psychotic serial killing demon free in exchange for Dexx’s life. Her sister is about to have a baby and a whole world of crazy has opened in the Whiskey household. And, if that wasn’t enough, she and Dexx are trying to figure out their relationship.
They’re about to discover a world that has been hidden from the Whiskeys. A world of shapeshifters, werewolves, and vampires. A world that was hidden to end a bloody war. A war between shifters and witches.
Paige has to make a decision. Solve this murder and start a war? Or ignore it and keep her family safe?
But when Dexx is bitten, all everything changes. War? Or love?
Why is nothing ever simple?

Time to see if Paige could actually do anything to help. She switched on her witch vision and studied his soul.

Cold blue with sparks of white. Another shape formed at his head. A muzzle. Round ears at the top of a large head.

“She’s here to help.” Karl raised a pink soul-hand, a bright rose color swirling over her heart. Sparks of pink amber shot from her toward Kevin.

Those sparks enveloped his soul, blending with his cool blue and created a blazing lavender. Surprisingly, the lavender stayed.

Interesting. Paige took in a deep breath. “I’m just going to ask you a few questions. All you have to do is answer them the best you can. Okay?”

His bear’s head nodded before his human head did.

Very interesting. “Is there any way for us to speak to your bear?”

The bear’s head tipped, and the eyes flared a bright, pale blue as it studied her.

She met its gaze and nodded deeply, maintaining eye contact. “Do you remember anything at all of the time you were away?”

Paige frowned. “Was it dark?”

The bear shook its head.

“Could you hear anything?”

“Look, Detective, I appreciate you’re just trying to do your job—”

The bear tipped its head and nodded hesitantly.

“—but I’m not going to be able to tell you anything.”

She was talking to the wrong person. Running her tongue along her teeth, she thought about how to approach this interrogation differently. “How do I talk to you?”

“Not you, Kevin,” Paige said, keeping her voice calm as the lavender dispersed to blue again. “I need to speak to your spirit animal.”

“I can see him and it appears as though he has information to provide.”

Whoa. “Calm would be better.”

“I don’t know what you want.” His voice rose a half octave.

Paige held out her hands, palm down. “He’s not something to be scared of.”

“I will hurt people if he comes out.”

The bear’s eyes grew smaller as he shrank, a feeling of shame and hurt surging toward her.

Paige narrowed her eyes. “Okay. Are you having a hard time bonding to you your spirit animal?”

“He doesn’t look as though he wants to hurt you.”

“I don’t know what you see, but he’s trying to take over.”

The bear shrank in what appeared to be even more shame, but the only thing she felt was frustration and disappointment.

What if she’d been the animal spirit and she’d chosen Kevin? What if she’d deemed him worthy of being a bear? How would she react if Kevin treated her this way?

About the same as when Alma had treated her similarly. Alma had been afraid of Paige’s gift, so she’d sealed away. Safe. Or so Alma had thought.

It hurt, though, being put away, not being trusted.

The bear’s head rose above Kevin’s and a feeling of trust-filled understanding trickled toward her.

“That’s not what he’s trying to do.” She couldn’t allow her own frustration to interfere with the line of questioning, though. Kevin, for whatever reason, was emotionally fragile. That happened. Fact of life. She needed to maintain her cool. “Kevin, when was the last time you tried talking to him?”

Paige glanced around the room, but only saw soul fires of those sitting around her. Nothing flared. “I don’t think he’s going to hurt anyone here.”

Sheriff Karl rose and walked over to Kevin, her pink and rose colored soul shooting sparks of comfort. The head of a fox peeked out, focused on the bear.

Kevin deflected them this time, his soul rejecting her pink and sending it into the office.

With no wards to contain the flares, she wasn’t sure how the people outside the office would react. “Okay, okay, okay!” Paige pushed out of her chair and onto the floor at Kevin’s feet, holding her hand out to Sheriff Karl to stop.

Karl’s fox tipped her head to the side as if curious.

“Let me try something, okay? Kevin, just be calm.”

Kevin continued to rock and moan.

The bear, however, raised his head.