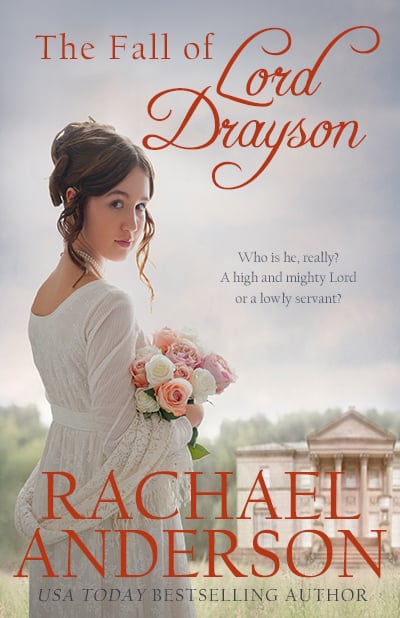 The Fall of Lord Drayson by Rachael Anderson

Who is he really? A high and mighty lord or a lowly servant?

When Colin Cavendish, the new earl of Drayson, informs Lucy Beresford that she and her mother need to vacate the house they’ve called home for the past two years, Lucy is fit to be tied. They have no money, no relations they can turn to for help, and nowhere to go. How dare the earl break the promise his father had made to the Beresfords without so much as a twinge of conscience?

Fate plays her hand when Lucy discovers the earl unconscious and injured in the middle of the road. When he awakens with no recollection of who he is, Lucy seizes the opportunity to teach the earl a much-needed lesson in humility and tells him that he is nothing more than a mere servant. Her servant, in fact.

And thus begins the charming tale of a pompous lord and an impetuous young woman, caught together in a web so tangled that it begs the question: Will they ever get out?

He stared at her incredulously, as though she had escaped Bedlam. “Are you in your right mind, woman?”

Lucy leaned forward and planted her palms on his bed so that her eyes were level with his. “My name is Lucy Beresford. I have lived in Askern all my life. I’m the sole daughter of a vicar and a seamstress who lived most happily despite their differences in station. When my father passed away, I came here, to this dower house. So yes, I am in my right mind. It is you who are not.”

The earl’s jaw clenched, and Lucy took some pleasure at the sight. Perhaps he would come down off his high horse and show at least a small amount of kindness or respect.

“I may not know who I am or where I came from,” he finally said, “but at least I do not feel the need to tell tales.”

“Tell tales?” Lucy gaped at him. Was he accusing her of telling untruths? Her, of all people? What untruths? How dare he!

Lord Drayson glanced down at his fingers, frowning when he spotted grime under his nails. He began to scrape it out as he spoke. “Claiming to be the daughter of a vicar and seamstress is all very romantic, but it cannot possibly be the truth.”

His gaze returned to hers. “In my experience, the daughter of a vicar would behave with more decorum, would know how to make a palatable broth, and would never allow herself to be alone in a room with a man who is not her relative. If there is one thing I know with absolute certainty, it is that you are no relation of mine.”

Lucy’s jaw clenched as she fought to control the rage building inside her. Ever so slowly, she pushed herself up to standing and glared down at the earl. “You are correct in thinking I am no ordinary vicar’s daughter. I do not love unconditionally. I show decorum only when I wish to. And I despise those who care for no one but themselves. But I do not tell tales.”

He actually chuckled, but it was more of a scoff than a show of humor. “Did you learn those traits from your father?”

“Do not speak of my father.”

“I would prefer to speak of myself, but you do not seem to share that preference, so perhaps we should speak of your father instead. Where is he, by the by? I would very much like to meet him.”

Lucy’s fingers became fists while her conscience became a battleground between all that was good and evil inside her. It was a short battle, with evil making a quick triumph.

Ever so slowly, her body still trembling with anger, she lifted her chin. If he was going to accuse her of telling tales, then tell them she would. “Very well, Collins. If you must know, I am your employer. And though you may not remember me, or this house, or your position in it, or the fact that you are perfectly susceptible to coming off a horse, just like any other human, I still expect some kindness and respect from you.”

“What on earth are you talking about? What position?”

There was not a hint of hesitation in her voice when she answered. “You are a servant in this house.”

A USA Today bestselling author, Rachael Anderson is the mother of four and is pretty good at breaking up fights, or at least sending guilty parties to their rooms. She can’t sing, doesn’t dance, and despises tragedies. But she recently figured out how yeast works and can now make homemade bread, which she is really good at eating.