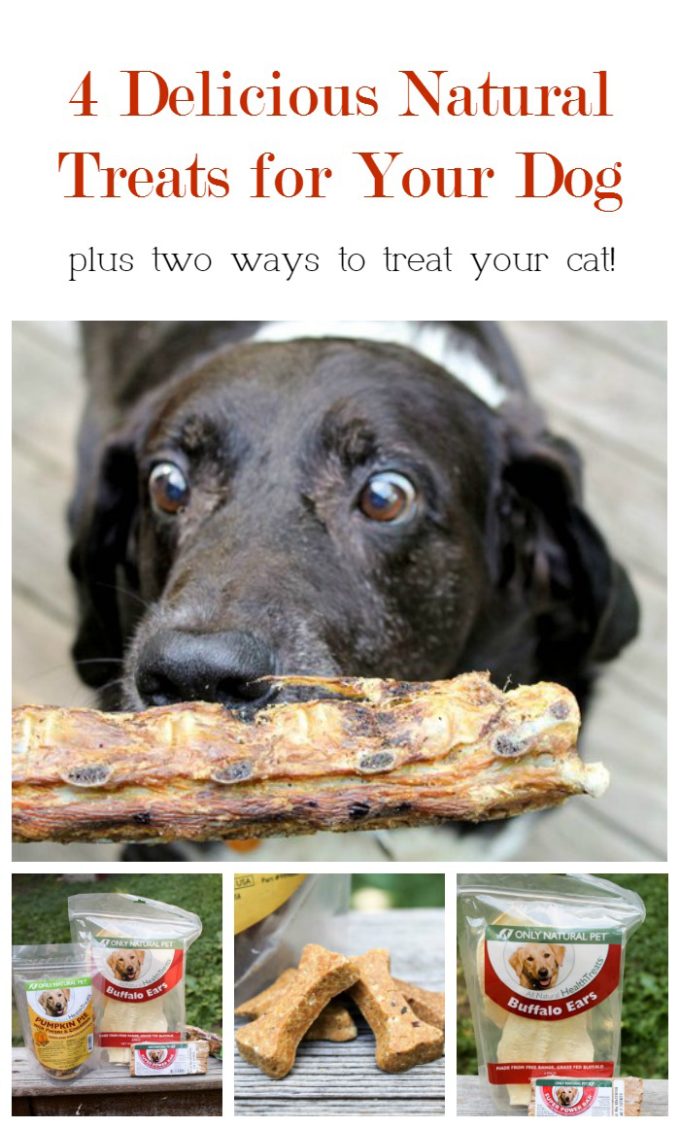 Ever since we lost Maia and Tasha earlier this year, Coop has been kind of down. He’s never been an only dog before. Even as a puppy, before we rescued him, he spent all of his time smooshed into a cage with way too many other dogs. I think being all by his lonesome has really affected him deeply in more ways that we thought it would. I try to cheer him up with yummy treats. Not in excess, of course. Coop is already a big boy and doesn’t really need to go nuts with the snacks. Since Cooper can pretty much wolf down anything you give him in a single gulp, I usually opt for longer-lasting treats. Only Natural Pet is my go-to source for things like buffalo ears and bones. I’ve been a big fan of theirs since the moment I first learned about them. They sent me a fabulous selection of treats for Cooper as well as two great ways to “treat” my cats (both my indoor furkids and my ferals).

Treating Your Pets the Natural Way with Only Natural Pet

*Affiliate links included below. I received the ONP products in exchange for an honest review. All opinions are, of course, my own. Well, and Coopers!

First, let me just say that Cooper was beside himself with joy when he realized the box I brought in from the porch was filled with goodies for his truly. My dogs could also tell when a package was for them. Maia was a master at it. Sometimes I think she knew before I even came in the door with it! Cooper relied on her for a lot of things, but now that she’s gone, he’s picking up where she left off. He was NOT thrilled when I told him we had to go outside and take pictures first! Look at those impatient eyes! Only Natural Pet sent me quite a few goodies, including:

Where to start, where to start? Cooper said “start with all of it!” I told him, sorry boy, you can’t eat it all in one day! Since he was eyeballing the lamb log so intently, I decided to let him start there. So, maybe you’re wondering exactly what a lamb log is. I was too! It’s actually part of the lamb’s spine. You’ll really notice it once your dog chews off the outer layers. Since it’s made from lamb instead of cow, it’s really good for pups with certain beef allergies. The bone has plenty of delicious (to your dog, anyway, I didn’t taste it!) marrow inside and is a good source of calcium. Cooper doesn’t really care about any of that, though. He just wanted to eat it! Here you go, boy! He was so offended by the fact that I made him take pictures before he could have it that he took his bone and walked away. He insisted I let him in the house with it, so that I couldn’t maybe take it back. I wouldn’t do that to you, bud! Fortunately, it’s not stinky or messy. It also lasts a really long time. Coop has been chewing on it for weeks now and he still has some left! While he munched on his bone, I took some pics of the Pumpkin Pie Biscuits for you! I’m not sure if you can tell in the picture, but these treats are relatively small. They’re perfect for a little dog, or for those times when you want to give your big guy a reward without ruining his dinner. Here’s the coolest thing about these biscuits: they smell crazy good! They are, hands down, the best smelling dog treats on the planet. While they’re not as aromatic as, say, a pumpkin latte, they do have a very pleasant hint reminiscent of pumpkin pie! Cooper was reluctant to try them at first, for some reason. I don’t know why. He’s weird at times. My mom finally convinced Coop to give it a try. Guess what? He liked it! See, Coop, I’d never steer you wrong! The other two tasty treats in the box were the Buffalo Ears and the Super Power Bars. The buffalo ears are a great option for those times when you want to give your dog something that has the general consistency of rawhide but don’t actually want to give them rawhide. Like the lamb log, this is a good alternative for dogs with allergies, too. They’re made from free-range, grass-fed buffalos. Each one is a pretty decent size (as you would imagine, considering how ginormous the buffalo is!), so Coop was satisfied for quite a while.
Cooper really loved the Super Power Bars, too! These are made with beef, so not ideal for allergic pooches, but if your dog doesn’t have issues, they’re a really satisfying alternative to a bone. They’re low in fat (because Coop doesn’t really need any more fat!) and high in vital nutrients like beta carotene and omega 3’s, which are important to maintaining healthy fur and skin. At just over $10 for two bars, they are a bit on the pricier side. If you have a small dog, though, you could easily break it into pieces (okay, so you have to put a little back into it, but it can be done). Even with Coop, I broke one in half and just gave him that, making two into four treats. They’re hearty enough that he was still happy after chewing it up.

The other two items that I received are more geared towards treating my cats’ overall health. Only Natural Pet went above and beyond here! When I was checking out items to review, I saw the Pet Eye & Upper Respiratory Homeopathic Remedy and immediately thought of my ferals. The poor things have been dealing with horrible eye issues. One of the older cats lost an eye last year, and one of this year’s kittens is on track for the same problem. I can’t catch these guys to treat them, otherwise, I’d find a clinic that could help them. But they are among the skitziest of the cats out there. This guy is one of the few that we can actually approach. I asked ONP if they thought I could maybe use the Remedy in the feral’s water. While they did say that it would be hard to determine the exact dosing that way, they did say I could give it a try. Honestly, at this point, any help is better than no help for my poor ferals. I’ve been putting it in their water and while the kitten is still dealing with issues (he has a pretty severe eye infection), I haven’t noticed any issues with the others. With respiratory illness season coming up, I’m definitely planning to keep it on hand to help them hopefully get through the winter without sneezing their furry little heads off. The last item in the box is for my old ladies, my ancient Mally (she’s 20, pictured above), Prue (14) and Willow (12). The Senior Feline Herbal Formula contains a blend of herbs designed to help support just about all of your older cat’s body systems. What drew me in was the fact that it contains something for just about all of my cats. Willow has digestion problems which can often lead to me paying out the wazoo to get her behind, um, evacuated. Mally is a cantankerous old kitty who is prone to sneezing. Prue, well, poor Prue is having a really rough time lately. She needs all the extra immune and digestive system help that she can get.

The Senior Herbal Support Formula isn’t a wonder cure. It’s not going to make your ancient lady suddenly frisky all over again. It won’t put the weight back on your sick cat. But it does provide great overall support to their healthy diet and veterinary attention. It’s 100% natural and safe, so it’s definitely worth using!

We really loved everything that we tried from Only Natural Pet. I knew we would, they’ve never steered us wrong before! If you head over to their website, you’ll most likely see some type of sale going on. They almost always have one going on. You’ll see it on the banner on their homepage. This month, they’re offering 25% off select products. ONP sells, as the name implies, only natural pet products, so you can buy with confidence. I also suggest checking out their “About Us” to learn more about the store and their values, including a list of ingredients that you will never find in their products.

Have you shopped Only Natural Pet before? What types of treats do your pups love?