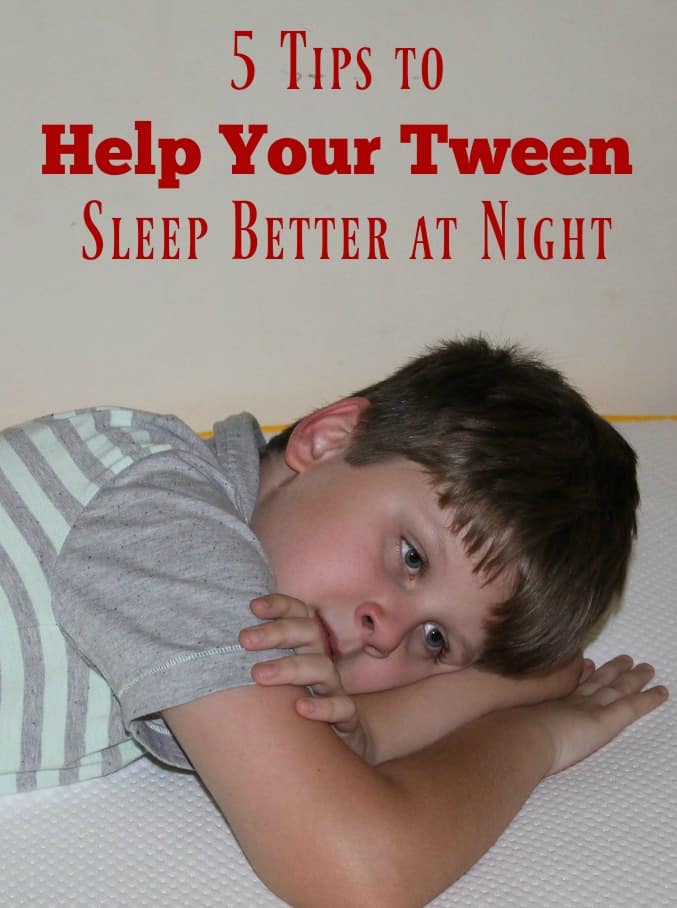 Once upon a time, my son actually went to bed early, slept through the night and woke up feeling refreshed & ready to face his day. Okay, that’s a total lie. My kid has NEVER slept well, but he did actually manage to go to sleep at a reasonable time and make it through the whole day without a nap once he started school! Now that he’s in middle school, though, the stress of his class load and earlier start time has him exhausted every day at 4PM. He ends up falling asleep for hours, then can’t get back to sleep when it’s time for bed. Something has to give, so I thought long and hard about how to help him get a better night’s sleep in the first place so he’s not tired the next day. A big part of that involved making sure he has a comfortable bed! Huge thanks to eve Mattress for helping with that part! We received a twin-sized mattress in exchange for an honest review (which you will find below, along with other tips to help your kids sleep better!).

5 Tips to Help Your Tween Sleep Better at Night

Start with a comfy mattress

Makes sense that your tween’s mattress plays a large role in helping him sleep at night, right? Jake’s old mattress wasn’t bad, per se. It was just, well, old. He’s had it since he moved from a toddler bed to a “big boy bed.” He’s 11 now, so that was basically like 8 years ago. When you’re looking for a mattress for your tween, choose something that’s supportive and cozy. Jake moves around a lot in his sleep. He’s neither a back or a side sleeper yet, so it was important to me that he have a mattress that adapts to both his growing body and his nighttime habits. The eve Mattress, which I’ll tell you a bit more about below, is such a fantastic choice for him. It’s made with new-generation memory foam, so it is constantly responding to his movements and supporting the parts that need it the most. He actually fell asleep for a nap about five minutes after he laid down on it. While we’re trying to eliminate the mid-day nap, that just shows how comfy it was!

Limit drinks, but don’t send them to bed hungry

We all want our kids to sleep through the night, not get up a million times to use the bathroom! I know when I have to get up in the middle of the night, it takes me at least a good 15 minutes to fall back to sleep. Jake is just like me. I try to limit the amount of liquid he has starting at about an hour before bedtime. At the same time, a growling, empty belly can also wake your tween from a deep sleep. Middle graders are growing at astronomical rates. I don’t think Jake has grown this much since he was an itty, bitty preemie! A light snack before bed, such as crackers or fruit, can stave off hunger until morning without interfering with sleep.

Give them plenty of opportunities to stay active during the day

Once your kids hit middle school, recess pretty much goes out the window. I thought Jake’s school was compensating by having gym three times a week, but he informed me the other day that he’s not having gym until health class is done. He’s gone weeks now without any physical activity at school aside from walking down the hall to go to his next class.

If your school’s gym and recess policies are completely lacking, you’ll need to work even harder at home to make sure kids are getting enough active time throughout the day. The CDC recommends that kids get at least 60 minutes of physical activity every day.

Set a “wind down” time and stick to it.

Tweens and teens need about 9 hours of sleep each night, but I bet many aren’t getting it. Jake is a night owl. He needs to go to bed at 9PM to get enough sleep, but he has a hard time falling asleep that early. He lays in bed, tossing and turning, for a good hour most nights! While I don’t force him to go to bed when he can’t sleep (there’s nothing more frustrating than just laying there thinking about how hard it is to drift off!), I do set a “wind down” time for him. He lays in his bed and does something relaxing, ideally something like reading a good book. This helps his brain realize that sleep time is imminent and sets the right mood.

A word about electronics and bedtime: While TV time shouldn’t really be part of this winding down, sometimes you have to pick your battles. If watching a little TV helps your tween drift off, then so be it. Jake is very much like his father, they both fall asleep better to background noise from the television.

An inviting and relaxing bedroom definitely makes it easier to fall asleep! The thing is, “warm and inviting” means different things to different people. In the perfect world, our tweens and teens would fall asleep in beautifully clean rooms with no clutter in sight. In reality, some kids are perfectly comfortable with a little light chaos surrounding them! Work with your tween to create a room that really feels like them so they have a space that is all their own. Keep the temperature in the room at a comfortable setting for your tween. Experts suggest maintaining a cooler room temperature under 75 degrees, but if you find that your tween sleeps better in a warmer room, go ahead and ignore the experts!

One more word of advice before I tell you a bit more about the eve Mattress: if your tween is seriously having major sleep problems, please talk to a doctor. There could be deeper issues than just difficulties winding down after a long day.

What is the eve Mattress?

First, eve only sells ONE type of mattress. It comes in all the standard sizes, but they’ve spent a lot of time perfecting just one mattress. They actually went through 70,000 prototypes to make that one, and it shows. It’s the perfect combination of supportive and flexible, a must for growing bodies. The mattress comes in a ginormous box ( which, FYI, makes a fun DIY playhouse for kids). Jake was so excited to get it set up, but I had to make him wait a day because I needed to clean out a spot in my garage so I could get his old mattress down to the basement. I set it up when he was at school to give it time to expand to its regular size. I was actually pretty surprised. Once I carefully cut open the plastic seal and unrolled it, the mattress puffed up pretty fast. It was ready by the time he got home from school. This pic below shows the eve Mattress within minutes after unrolling it. As I mentioned above, Jake plopped down on it as soon as he got home from school and drifted to dreamland. He’s been sleeping on it for about two weeks now. He says he loves it! I noticed that he spends a lot more time in his bed than he used to. Typically, he’d fall asleep after some difficulty, then get up

I think your tween (or you!) will love it too. If you don’t, they’ll take it back! You have 100 days to decide if it’s the right mattress for you. Learn more about their guarantee here. Visit the eve Mattress website to learn more about all the care they put into creating their mattresses and to order!