One Day Only: Yo-kai Watch: The Movie In Theaters on October 15th #YoKaiWatchMovie 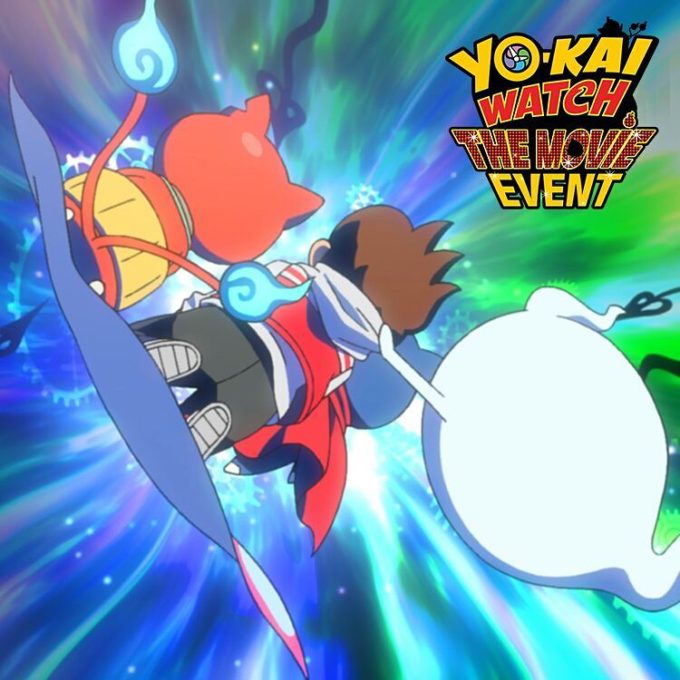 This post is brought to you by Yo-kai Watch: The Movie and The Motherhood. All opinions are my own. All images below courtesy of Yo-kai Watch.

Have you heard the news? For one day only (October 15th), your family can catch Yo-kai Watch: The Movie on the big screen! This is one event you’re not going to want to miss, so visit Fathom Events site to find theaters near you and buy your tickets right away! Haven’t heard of this fun cross-media universe? Read on for more details about Yo-Kai Watch, the event and a fun Twitter party (with awesome prizes, of course!).

What is Yo-kai Watch?

As I mentioned above, Yo-kai Watch is a “cross-media universe.” Not sure what that means? Basically, a cross-media universe tells a story (or series of stories) across, well, different media. These usually include things like television shows, movies, video games, apps and toys. The Yo-kai Watch story grew in popularity and expanded into multiple media platforms after initially beginning in Japan. Any fan of role playing games knows that pretty much everything awesome originates there. I may be biased though, as I lived in Misawa, Japan for two years.

Yo-kai Watch follows the hilarious adventures (or misadventures) of a human boy named Nate Adams and the mischievous Yo-kai (invisible beings that cause all of life’s little annoyances) around him. The boy discovers a special watch that lets him find and summon the Yo-kai, make friends with them and work with them to solve problems. Nevermind that those problems are often made by the Yo-kai themselves! This special event of Yo-kai Watch: The Movie is the first English-language film based on the Yo-kai Watch phenomenon. It features the voice talent from the hit show, airing on Disney XD. The film follows Nate Adams and his Yo-kai friends as they go back in time to help Nate’s grandfather battle evil Yo-kai. We also get to see where Nate’s watch originated, and we’ll meet a brand new Yo-kai. Hovernyan is a floating blue cat who is Nate’s grandfather’s heroic companion.

In addition to seeing this movie on the big screen, attendees will also have a chance to receive a limited edition Hovernyan YO-MOTION YO-KAI MEDAL. Of course, this is while supplies last, so you may want to get there a little early! By the way, that medal is compatible with the YO-KAI WATCH MODEL ZERO from Hasbro. It can unlock special content in several different apps and games, including special features and bonuses in the brand-new Nintendo 3DS games YO-KAI WATCH 2: Bony Spirits and YO-KAI WATCH 2: Fleshy Souls. You can collect and store all of your YO-MOTION MEDALS in the YO-KAI MEDALLIUM COLLECTION BOOK from Hasbro.

Can’t wait until October 15th to start the Yo-kai Watch: The Movie fun? Visit the official website to learn more about the universe. View full episodes on the official YO-KAI WATCH YouTube channel and check out the entire first season on Netflix! Follow Yo-kai Watch on Twitter,  Facebook and Instagram to keep up with exciting news! Remember, you’ll want to visit the Fathom Events website for local screening times and ticket purchase.

To celebrate this momentous event, Yo-kai Watch: The Movie and The Motherhood are hosting an amazing Twitter party! I’ll definitely be there and really hope to see you! We’ll be talking all about the Yo-kai Watch world and characters as well as sharing more details about the big day. Of course, you can’t have a Twitter party without prizes, right? Well, I guess you could, but prizes definitely make it more exciting. You’ll have a chance to win one of 5 $50 Visa gift cards during the party!

Are you a fan of Yo-kai Watch? Are you planning to attend this special event?