5 Netflix Originals to Binge On This Weekend [with trailers] 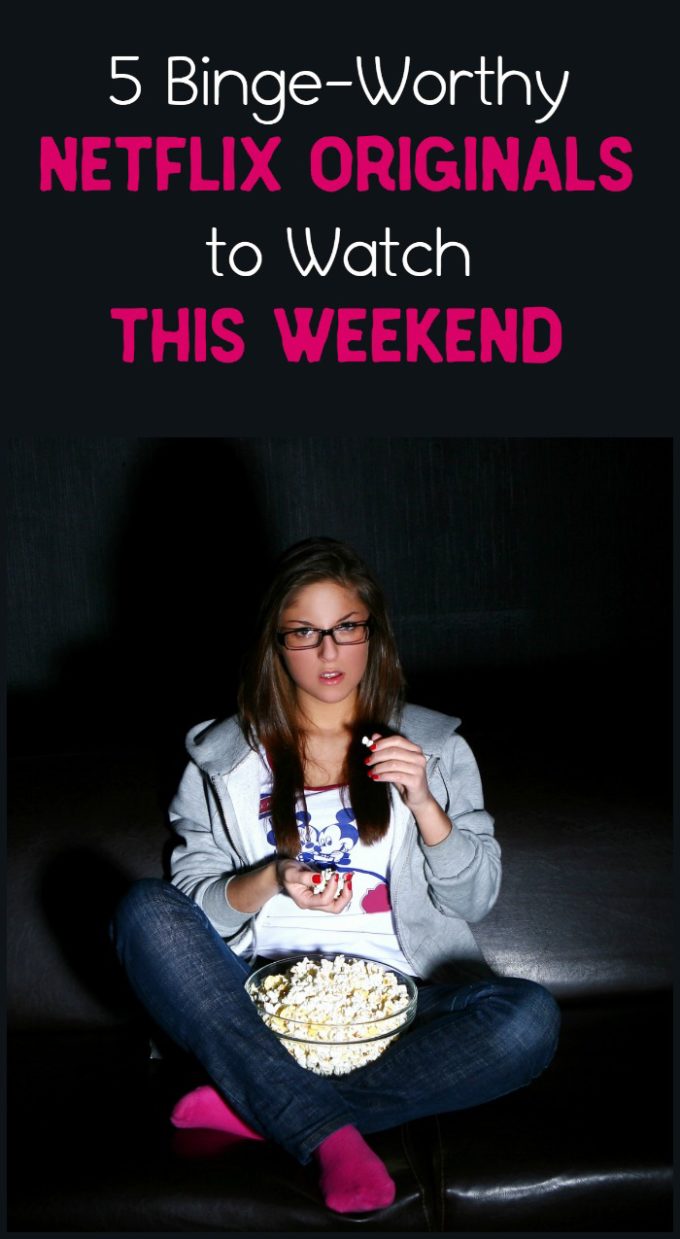 Looking for something fun to do over New Year’s weekend that doesn’t involve binge-drinking $12 cocktails or freezing your butt off while standing in a crowded street waiting for a ball to drop? Why not stay home and binge on movies and TV shows you’ve been meaning to watch all year? My husband and I have been watching a lot of Netflix Originals lately. They actually have quite a few really good ones! Check out a few that are worth binging on this weekend.

I’ll be honest, I wasn’t exactly a huge fan of Full House as a kid. I watched it, but it wasn’t among my favorites. The character of Stephanie really annoyed me for some reason! It’s funny because now, on Fuller House, she’s one of my favorites. This show is WAY up there on the cheese factor, but that’s part of what makes it so entertaining.

The show takes place many years after the end of the last one. DJ is now a widow raising three boys, much like her dad was a widower raising three girls. Like the original, DJ gets help from her sibling (Stephanie) and her best friend. Kimmy is a single mom too (sort of, her ex isn’t completely out of the picture), bringing a teenage girl into the mix. Just about all of the original characters make an appearance. Steve, DJ’s high-school boyfriend, is actually a recurring core character in the show. Danny, Jesse & Becky, and Joey all pop in on a semi-regular basis. Michelle is the only character we never see, as the Olsen twins decided not to join the revival.

Each episode is about 25-27 minutes long.

With two seasons available for a total 26 episodes (around 13 hours), binging on Fuller House should keep you busy for most of the weekend (depending on how often you leave the couch for a break). Netflix officially renewed the show for a 3rd season, but you’ll have to wait until next year to find out what happens next. That’s the only downside to Netflix originals, the looooong breaks in between shows.

I really don’t know why Between didn’t get more attention, this was a great show! A strange virus wipes out everyone over age 21, leaving behind a town full of kids to figure out how to care for themselves. You might think it turns into a Lord of the Flies scenario, but the kids really do a great job of pulling together to keep each other alive. I actually think they did a better job than a town full of grown-ups would have done!

The show stars, among others, Jennette McCurdy (Sam, of iCarly). This is the first time we really see her playing a role outside of Nickelodeon-type characters. She really did a spectacular job as Wiley, a pregnant teen who was planning to get out of town before the government quarantined everyone. I thought that it showcased her range as an actress fairly well.

Between did pretty well in Canada, where is was originally created. US critics gave it scathing reviews, but I find most of them to be pretentious anyway, so I never pay attention to their reviews. Sadly, the show was canceled after one season. Fortunately, the 1st season ends without a major cliffhanger (although it will leave some stuff to your imagination).

With only six episodes at around 43 minutes each, you can watch this entire series in one day.

I think just about everyone has heard about Stranger Things by this point, as it’s probably one of the most popular Netflix originals to come out recently. Unlike most of the world who watched it months ago, I only just got around to it. I wasn’t sure if I was going to like it, but my aunt recommended it. Rich and I couldn’t think of anything else to watch one night, so we threw on the first episode. We watched the first half of the 8-episode season that night and the rest of the season over the next two nights.

If you haven’t heard of Stranger Things yet, it’s a sci-fi/horror/drama/adventure show about a girl with weird abilities, a boy who goes missing, and a mom who will do anything to find him, even if it makes her look completely bonkers to the rest of the world. Behind it all is a secret government lab filled with people who are more inhuman than the beasts that lurk in the shadows.

With 8 episodes averaging 50 minutes, this show will keep you busy for just about one whole afternoon of binging. Pair it with either Between, Travelers or maybe Sense8 (which I haven’t seen yet, so I can’t say if it’s good or not) for a sci-fi weekend.

I haven’t watched this one yet (it just came to Netflix a few days ago), but my husband is currently binging on it. He started it without me, so now I have to catch up on my own this weekend. He really likes it so far. He said that he was getting agitated with the first episode because it kind of just starts without giving any sort of backstory, so you have no idea what is going on, but it was agitating in a good way. It must have been, he is very picky and will shut off a show 10 minutes into the first episode if it doesn’t give him that binge-worthy feeling.

The show, which stars Eric McCormack of Will & Grace,  takes place many years into the very bleak future. Humans are pretty miserable. Of course, they’ve invented time travel, but they can only send back the consciousness of a person. That essence pops into a living person in whatever time they’re traveling to, letting them pretty much possesses the person a la Quantum Leap style. The twist? They can only jump into people who are about to die very soon.

This one clocks in at about 8.8 hours worth of binging, with 12 episodes averaging around 45 minutes each.

Gilmore Girls: A Year in the Life

I watched this the night it aired. Stayed up late and binged on the whole six hours! After waiting a decade for a reunion and a year from the time it was announced until it aired, honestly, I think my expectations were way too high. Don’t get me wrong, I liked it enough to want to watch it again, but I was kind of hoping for something else with more closure.

There were a few scenes that they could easily have killed and used the time for something more substantial. Like the whole Stars Hollow musical, they devoted way too much of our precious time to something that could have been summed up in 5 minutes. I also felt like Palladino had binged on too many David Lynch movies before writing this one, as there were a few scenes that were just surreal and not at all Gilmore-like. Nevertheless, this is still a must-watch for fans of Gilmore Girls. It is one of my all-time favorite shows. If they decide to continue the revival, I’ll definitely stream it.

With 4 episodes averaging 90 minutes (the last one is 102 minutes), you’ll get a little over 6 hours of binging in with Gilmore Girls: A Year in the Life.

There are still a ton of Netflix Originals that I’m either planning to watch or thinking about checking out. These three are on my “maybe” list, if you’ve watched them, please let me know what you think.

If you can think of any other great binge-worthy Netflix Originals that I need to be watching, please let me know in the comments!