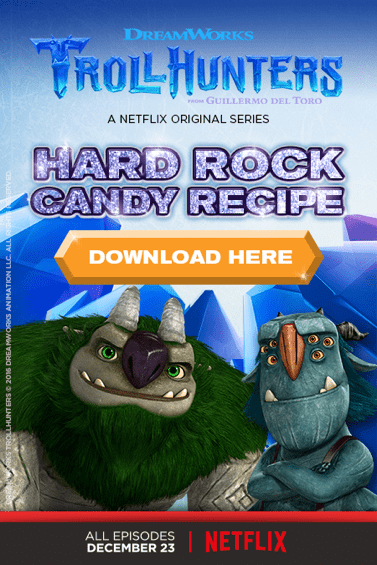 Looking for a fun way to pass the time with the kids while waiting for the big man in the red suit to make his appearance later this week? Check out this neat Trollhunters Hard Rock Candy recipe with free printable!

Trollhunters is a Netflix exclusive that premieres tomorrow (December 23rd)! I am really looking forward to this one! I actually read the book last summer. It’s a great story for tweens & teens! Trollhunters is a story from the incredibly talented and imaginative Guillermo del Toro.  In DreamWorks Trollhunters, when ordinary teenager Jim Lake Jr. stumbles upon a mystical amulet on his way to school one morning, he discovers an extraordinary secret civilization of mighty trolls beneath his small town of Arcadia.Suddenly destined to play a crucial role in an ancient battle of good and evil, Jim is determined to save the world – right after gym class. This is a must-see viewing event for the entire family!  DreamWorks Trollhunters really is perfect for viewers of all ages. Check out a sneak peek in this special featurette from Netflix.

The cast of Trollhunters is pretty spectacular! Voice talent includes:

Then there is the creative genius behind the show! Trollhunters is created and executive produced by Guillermo del Toro (Crimson Peak, Hellboy). Marc Guggenheim (TV’s “Arrow,” “DC’s Legends of Tomorrow”), Rodrigo Blaas (animator Up, Brave, WALL•E), Christina Steinberg (Rise of the Guardians) and Chad Hammes (Dragons: Race to the Edge”) serve as executive producers. Dan Hageman and Kevin Hageman are co-executive producers.

With such an amazing cast and crew, Trollhunters is pretty much guaranteed to be a hit that the whole family will absolutely love! I know we’ll be streaming it on Friday night!

Did you read the Trollhunters book? Are you looking forward to the series?