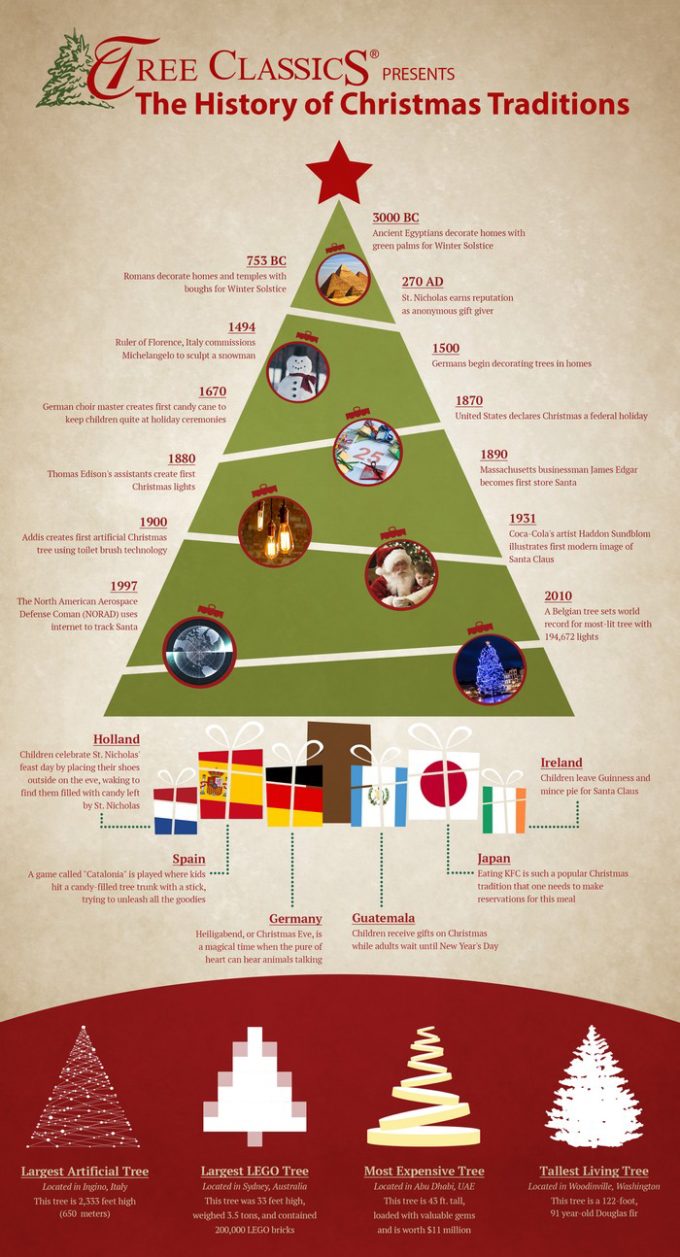 Ever wondered where all our Christmas traditions came from? Today, Jen Lutz, a writer for TreeClassics, shares the inspiration behind the many ways we celebrate the season. Don’t miss the awesome infographic at the bottom!

The Christmas traditions we practice today are rich and storied in history. From decorating a tree and singing carols to writing letters to Santa Claus, these practices stem from ancient religious and secular customs that have evolved through time and shaped the way we celebrate Christmas today.

In ancient Europe, people filled their homes and temples with evergreen boughs in celebration of the Winter Solstice. As Christianity spread, the Christmas tree became a venerated symbol for those who practiced the religion. People also danced around stone circles and sang songs of worship—the oldest form of Christmas carols. Over time, these were replaced by solemn Christian songs and evolved into the joyful secular carols we hear today.

The inspiration behind Santa Claus can be traced back to the 4th century; a Turkish bishop named Nicholas was renowned for his generosity and habit of leaving secret gifts for those in need. In more modern times, the North American Aerospace Defense Command, a combined American and Canadian organization in charge of aerospace warnings and controls for North America, tracks Santa’s whereabouts around the globe using radar, satellites, cameras, and fighter jets. This new, high-tech tradition inspires children to participate in holiday celebrations by way of space age technology using their computers and smartphones.

Geography plays a part in the development of these traditions as well. Because of varied cultural backgrounds, people around the world celebrate Christmas differently. In Greece, basil is wrapped around a cross and used to sprinkle holy water around the house to ward off mischievous goblins. A traditional Icelandic holiday story tells of 13 trolls that come down from the mountains one by one during the holidays and leave presents for children. Eating KFC is a very popular Christmas tradition in Japan, where one would need to make reservations for a meal. In Australia, Father Christmas enlists the help of six kangaroos rather than reindeer to spread holiday cheer.

Explore some of the interesting holiday traditions that have been adopted through the ages and how Christmas is celebrated in other parts of the world in this infographic presented by Tree Classics. Click on the picture to go to the full-size version (if you are in Chrome, click again to zoom in)! What are your favorite Christmas traditions? Share in the comments!