Encouraging Kids to Find & Follow Their Dreams (Even the Scary Ones!) 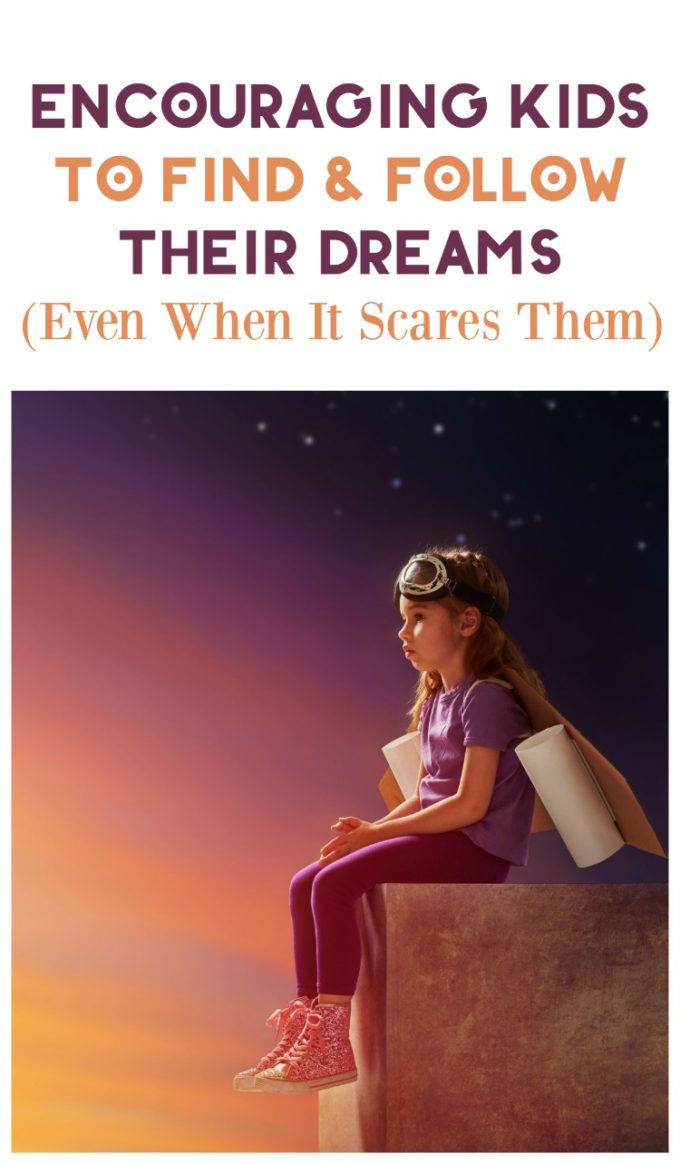 How do you encourage your kids to follow their dreams in a world so full of uncertainty? What if you know those dreams will take them down a tough road filled with harrowing twists, staggering turns and stiff competition around every corner? When I was a kid, I wanted to be an actress, of all things. It’s kind of funny if you think about it because I’m an incredibly shy and skitzy person now. My mom knew I had an insanely tough road ahead of me. She probably also knew that I’d outgrow that desire. Rather than hold me back, though, she signed me up for acting lessons, took me to tryouts and supported me in my school play. Eventually, I decided that writing was more my thing than acting, but at least I had the chance to try. My son’s dreams are constantly changing. He’s 11, so he hasn’t really found his bliss yet. He wanted to design video games for a bit, but I think he’s moved on to something else. He loves to sing, but he’s shy like me. I was so insanely proud of him when he fought past his fear and got up on stage at his chorus concert in December. In the past, I’d have to call him in sick on concert night.

We all want our kids to be happy, to live fulfilled lives. A big part of our job as parents is to make sure they have a chance to really follow their dreams. First, though, we have to help them find that dream. This is kind of a two-step post, and it’s not a bullet-point list of “here’s what you do,” but rather a guideline. Let’s start with helping our kids find their dreams!

Encouraging Your Kids to Find their Dreams

Think back to your childhood years, say around the tween years. Did you know without a doubt what you wanted to be when you grew up? Even if you did, I bet it changed as you grew and learned more about the world around you. At 10, I wanted to be a lawyer. I don’t know why. I think because I read that they make a lot of money. By 11, that dream evaporated completely and a new one took its place (maybe it transferred over to my brother because he’s a lawyer now).

My son gets frustrated a lot because he doesn’t know what he’s good at, what he wants to do with his life. At 11, he feels like he should already have it all figured out. Our school systems have become pressure cookers for kids starting at around age 8 (that’s when the standardized testing begins in our state, when “playtime is over, kids,” according to one teacher). I’ve always allowed Jake to try different extracurriculars- and to quit them if they weren’t for him. It doesn’t make him a quitter, it doesn’t mean he isn’t following through with commitments. Too often, we either push our kids into activities that they want no part of, or we force them to stay with something that they really have no passion for. I say let them quit and use that time to find their real passion. Yes, even if it means they’re starting and quitting a dozen things a year.

There’s a flip side to that. Sometimes our kids want to quit not because they don’t feel passion for the activity, but because they’re letting their fears get in the way, and that’s not so okay. Jake loves to sing and he does it so wonderfully. He joined chorus this year and absolutely loves it. His teacher is just fantastic, he likes the songs and has a great time in class. Yet he came home asking to quit about a week before the winter concert. He was terrified of getting on stage. In that case, I didn’t let him quit. Instead, I asked him to just try. Go to the concert and try to get up there. If he felt like he was going to completely freak out, I’d come get him and bring him home. No questions asked. Guess what? He sang his heart out on stage! He said he was so nervous that he was sweating to death, but he did it. His next concert is coming up on Friday and he’s not even a little worried about it!

Giving him an out while encouraging him to try really made the difference between this year and last year, when I had to call him in sick for every concert. I think the key is to make sure the “out” isn’t too simple. In the past, I gave him the out before he even tried to try. This time, he was already there, so why not take it a step further. Our kids need to know that it’s okay to fail sometimes, especially when they’re really scared of doing something. I don’t want Jake to be like me, scared of his own shadow, but I also want him to know that not everyone finds and pursues their passions by diving right into the deep end.

Of course, the most important part of encouraging our kids to follow their dreams is simply by listening to them. Jake goes through so many phases. One minute he’s into coding, the next he’s telling me he wants to teach himself all about string theory physics. I pay attention to his interests so I can find little ways to encourage them. I can’t even pretend to understand physics, but I can talk to him about my own thoughts on alternate realities and keep the conversation moving.

Last (but most certainly not least), remember that it’s okay if your kids haven’t found their passion by age 12, 15 or even by 18. Sometimes it takes years to find that one thing that makes us want to get out of bed in the morning. If your 13-year-old has already found it, that’s amazing. If not, keep helping him search!

What do you do to encourage your kids to follow their dreams?