5 Subtle Ways to Boost Your Tween’s Confidence (Without Being Embarrassing!) 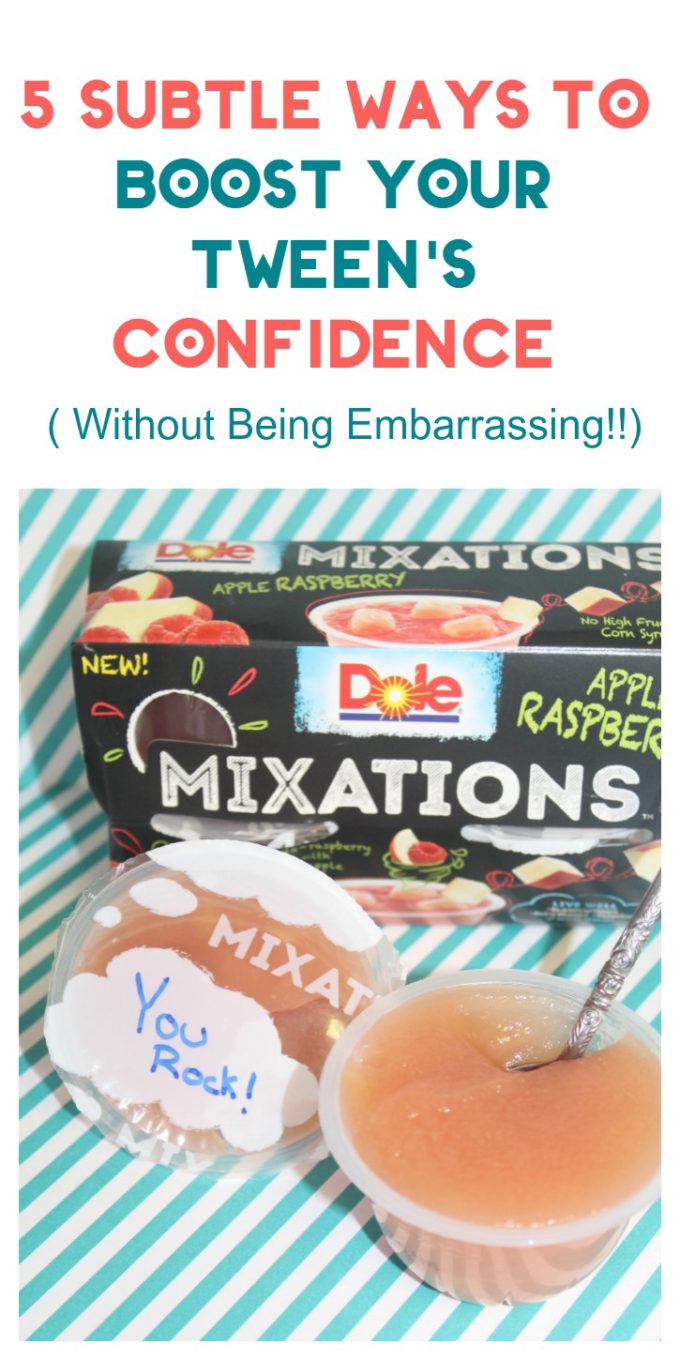 This post was sponsored by DOLE® as part of an Influencer Activation for Influence Central. All opinions expressed in my post are my own. As moms to tweens- especially tween boys- we’re in a rather precarious situation. Our kids are going through pretty much the roughest time of their childhood. Hormones wreak havoc throughout their bodies, school gets harder, and bullying becomes a little too common. They need us more than ever, but at the same time, they want to feel more independent. They definitely don’t want us hugging and kissing them in front of their friends!

Just last week, I made a grave error in judgment. I *gasp* hugged my son after his chorus concert. In front of everyone! I was so proud of him that it just kind of happened. Before I knew what I was doing, I had my arms around him and I kissed his head. Oh boy, by his reaction you would think that I had just broadcast his bathtime baby pictures live on prime time television! My son is going through a rough time in school right now and I don’t want to do anything that is going to make it worse. Still, I want him to know how much I love him and how awesome I think he is. I just have to be more subtle!

Show Up Without Showing Up Other Parents

When Jake sang in his chorus concert, I was SO PROUD. All caps proud. I wanted to stand up and scream “look at my awesome kid!” I wanted to clap the loudest, hoot and holler. I did none of these things. I showed the same amount of restraint as every other parent around me who wanted to do the same thing. Why? Because if I acted like the proud lunatic mama that I was, my kid would have gotten flack for it for years to come. Instead, I showed up, I sat quietly, clapped appropriately and piled on the affection and praise when we got home. Our kids just want us to be there to see their successes. They don’t want us to be crazy people. Just be there. Showing up is often enough to boost their confidence and let them know you really care about what they’re doing.

Listen without acting as often as you can

We parents do love to hear ourselves talk. We also have a deep-rooted need to solve problems for our kids. When your tween starts to tell you about a mean kid at school, don’t jump in with advice right away, and don’t judge or scold your tween for sharing any strong opinions about that kid. There’s a boy in Jake’s class that is, well, he’s a bully. Jake needs to vent about him often, but he doesn’t want me to swoop in and call the school. Not yet, anyway. Maybe that time will come, but for now, he wants to handle it on his own.

As much as I want to save my son from every bad thing in the world, I know that it’s important for him to have someone that will listen without always acting. Not only is it embarrassing to a tween to have their mom call the school about every little incident, but to our tweens, it makes them think that we don’t have confidence in them to solve problems on their own. By allowing them to brainstorm with us and ultimately come up with the answer (even if we kind of guide them there without them knowing it), they’ll feel more confident and able to make other major decisions in the future. Remember the good old days of elementary school when we’d write adorable little love notes to our kids, add doodles and hearts all over their napkins and create cleverly themed lunches on special days? Yeah, you can’t do that anymore. I’m so, so sorry to break it to you. Don’t worry, you can still slip in a little confidence-boosting note, you just have to be more subtle about it. Here’s an easy way to do it: write on the DOLE Mixations® lid! Seriously! It’s designed for it. A simple “WTG” or “Hi” message can brighten your tween’s day and it’s easy enough to hide from his friends at the table because it looks like it’s part of the lid.

No, I’m not telling you to say “yes” when your tween asks for the latest $60 video game or wants to stay up all night on a school night, don’t worry! I’m talking about those moments when he actually asks to spend time with you. I have a confession: in the past, I was always so busy with work that when Jake would ask me to play a game, I’d tell him I couldn’t right now. Sometimes, he’d ask me to do something during those rare moments when I wasn’t busy and I’d still tell him no because I was “trying to relax” after a long day. I stopped doing that, though. I know he’s not always going to want to spend time with me, especially as he gets older. When he asks if I want to play a board game, have a movie night or just hang out with him for a few minutes, I almost always say “yes” without hesitation. Not only do I get more time with him before he’s all grown up, but it reminds him that he is my priority and my number one favorite person.

Ever ask your kids “how was school today?” only to get a vague response in return? If I ask Jake that question, he usually tells me “mediocre,” and heads upstairs to his room. I’ve learned over the years to ask smarter questions. I start with the easy ones, like “what did you eat for lunch today?” on the days that he buys lunch at school. Then I ask things like “what did you study in Science class today?” This is a better question than “what did you learn?” to which the answer is almost always “nothing.” I also find that it’s smart to do the de-briefing session over a snack. Again, this is where you can get creative with the DOLE Mixations lids! Since it’s just you and your tween, you can save those over-the-top lovey-dovey notes you want to write for now. Like “listening without always acting,” the after-school de-briefing gives your tween a chance to decompress and reminds him that you truly are interested in what he has to say about his day.

DOLE Mixations are perfect for when you need a tasty snack without a ton of mess. Since the fruit is in the sauce (rather than a syrup), there’s not splash or spill. Each variety is a delicious and imaginative combination of smooth fruit sauce and juicy chunks of real fruit. Plus, they’re  non-GMO*, contain no high fructose corn syrup, no artificial flavors, are gluten free and rich in Vitamin C! Then, of course, there are the lids, which are designed to capture your creativity!  DOLE Mixations come in four tasty varieties:

It’s really hard to pick a favorite. I think if you forced me to decide, I’d go with the Apple-Raspberry variety. Such a tasty combination! If you’re ready to give it a try, visit the DOLE Mixations website to learn more! Make sure you grab this coupon to save $1.00 on any one (1) package of DOLE Mixations! Follow DOLE on Facebook and Twitter to keep up with news!

What messages would you put on your DOLE Mixations lids? Do you do any subtle things to help boost your tween’s confidence?

* No genetically modified (or engineered) ingredients