PetSmart Celebrates 30 Years With Their Biggest Philanthropic Campaign Ever! 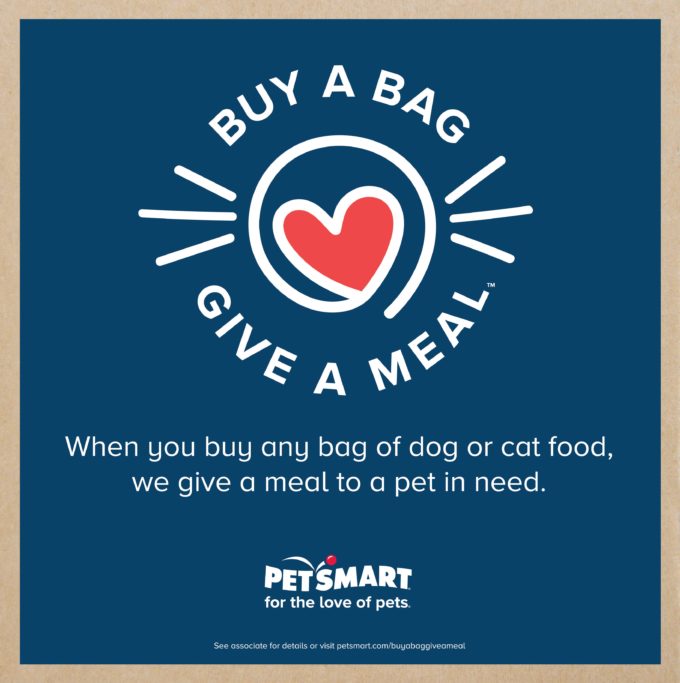 This post is sponsored by PetSmart® and the BlogPaws™ Pet Influencer Network™. PetSmart is not responsible for the content of this article. Have you heard the news? PetSmart® is celebrating their 30th Anniversary with their biggest philanthropic campaign ever! They just introduced their new Buy a Bag, Give a Meal™ program, and I’m so excited to tell you about it. It’s absolutely amazing! Just like it sounds, for every bag of pet food that you buy in PetSmart or on their website from now through the end of 2017, they’ll donate a meal to a pet in need. PetSmart is expecting to donate more than 60 million meals! That is a lot of cats and dogs that won’t have to go hungry! Buy a Bag, Give a Meal™ at PetSmart

Helping animals in need is incredibly important to me. As many of you know, I adopted a feral cat (Alex the Fuzz) a little over a year and a half ago. I also adopted a rescue dog, Cooper, nearly 10 years ago. While Fuzz was pretty much plucked from right outside my home when he was only 8 weeks old, Cooper went through six traumatic months in a cage before he was rescued by a fabulous animal rescue shelter in my area. I’ve seen first-hand what food insecurity can do to a dog, especially when it happens during their formative months. Even though Cooper has never gone hungry since the day we brought him home, it took him nearly nine years to really believe that. He spent most of that time stealing food whenever he could get it. I know that the rescue that we adopted him from did their very best, but as I said, he spent most of his puppyhood in a less than stellar environment. I don’t know his full history, but I do know that he was caged with ten other puppies in a very small space before the rescue found out about him.

When I first heard about the Buy a Bag, Give a Meal™ campaign, I was worried that it wouldn’t include the types of food that we use. Well, guess what? It includes every brand and size bag of both cat and dog food sold at PetSmart!

That means every bag that I buy for Cooper and Freya, for Fuzz and the rest of the cats and even for the ferals outside will give a meal back to a pet who really needs it most. These meals will help all pets in need, including those not currently in shelters. As David Haworth, DVM, Ph.D., president of PetSmart Charities, points out, not all animals in need are living in shelters. Many of them are living with their humans who may have fallen on tough times and are receiving food through a food bank. As someone who went through that a few years ago, I can tell you that pet food is a rare find at these banks. People in that situation are already going through an awful time. They shouldn’t have to lose their beloved family dog as they get back on their feet. Donations to food banks will not only help keep food in their pet’s bowls but also keep more pets out of shelters. A dog shouldn’t have to leave his loving family simply because mom or dad lost their job.

I already shop do the bulk of my pet food shopping at PetSmart. With this new Buy a Bag, Give a Meal™ program, I’ll definitely make an effort to buy ALL of my food there whenever possible.

Read the PetSmart press release here to learn more about the Buy a Bag, Give a Meal™ campaign! Follow PetSmart on Twitter and Facebook to keep up with their news.

This is a sponsored conversation written by me on behalf of PetSmart. The opinions and text are all mine.