The Journey of the Blanky Doesn’t End When Kids Grow Up! 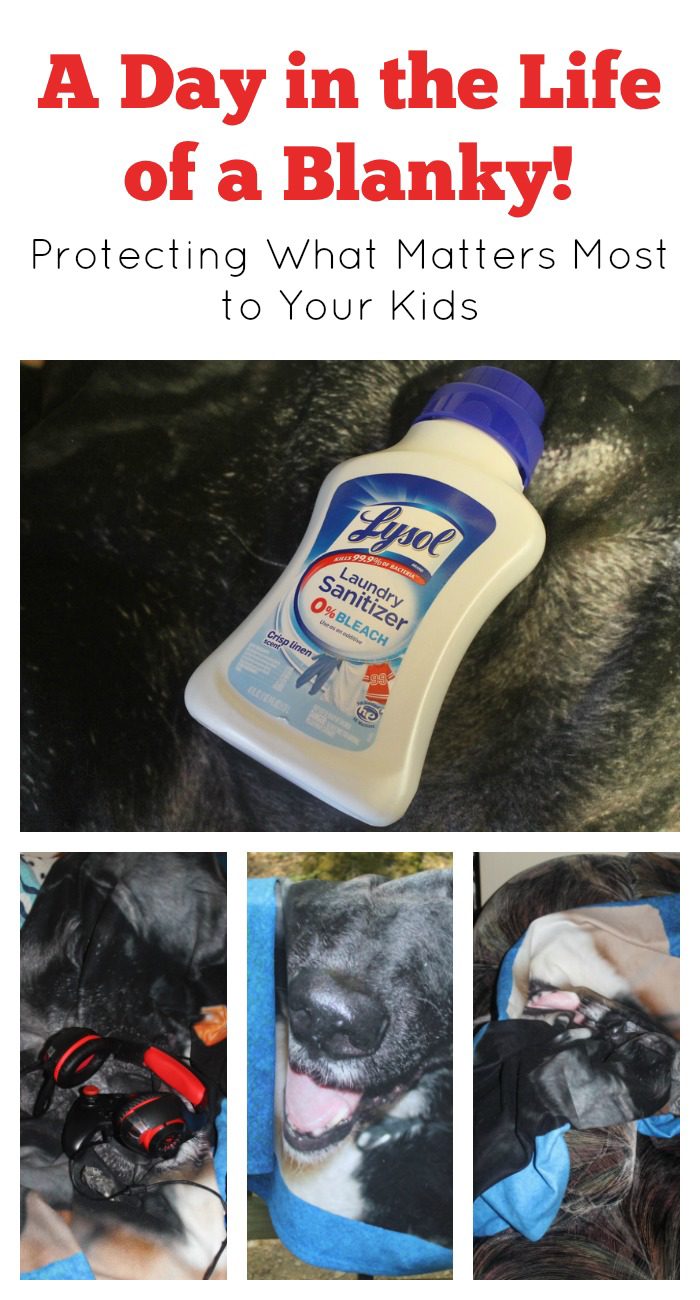 This post is brought to you by Lysol. All opinions are my own. Think kids let go of the blanky habit once they become tweens? Think again! While they may not call it a “blanky” anymore, just about every kid from tot to teen has that one special blanket that they’ll never let go of.  Jake has an arsenal of them! I’m not kidding you, the child has a blanket obsession. In fact, pretty much every single throw, duvet, quilt or oversized fleece squares that come into this house end up in his room. Every single one of them has some sort of meaning attached to it. Right now, though, the most meaningful blanket in his arsenal is his “Cooper” blanket.

A Day in the Life of the Cooper Blanket

It seems like the older your kids get, the messier their stuff becomes, and that definitely includes their favorite blanket! Follow along on a day in the life of the Cooper blanket, then read on to find out why new Lysol Laundry Sanitizer is a must-have in your laundry room!

The Cooper blanket is so special because together,  Coop and Jake were the definition of “a boy and his dog.” I got Jake the blanket a few years ago as a surprise. He was going through a rough time, and I thought a giant reminder of how much his favorite dog loved him would really help. He used it constantly for a while but then moved on to other blankets. After all, Coop was still here to give him a living, breathing reminder. Sadly, we lost Cooper a few months ago. It was probably the worst day of my son’s life so far. It definitely ranked up there with the worst of mine. That night, I dug out the Cooper blanket to comfort Jake and let him know that his dog would always be there with him.

Now, Cooper still travels all over the house in his blanky form! He gets to hang out with his boy and play video games in Jake’s messy room. He hangs out on the couch watching cartoons in the afternoon. He heads outside on a sunny day to lounge on the deck…and sometimes gets left out there. And sometimes he even still gets to hang out with the cats! Okay, so maybe he could do without that one! From a messy tween boy’s room to the great outdoors, everywhere Cooper goes in blanket form, he’s picking up dirt and germs. When he heads outside, he’s picking up pollen, too, which makes me sneezy! Keeping the Coop blanket clean is definitely a priority, but keeping it intact and still looking fantastic is an even bigger priority. After all, Coop did once lay on the blanky himself. It’s kind of like a national treasure or a historic monument, you can recreate it but it’s never going to be the same as the original. This is where Lysol Laundry Sanitizer comes in to save the day.

Lysol knows how important your child’s blanky is. They also know just how much kids of all ages put that special blanket through! NEW Lysol Laundry Sanitizer saves the day…and the blanky…by zapping 99.9% of the bacteria that it attracts EVEN IN COLD WATER. That’s important because washing in cold water is also a better way to help preserve the vivid colors. Plus, it saves energy. I’m all about anything that helps keep my electric bill down. I don’t really wash anything in hot water, except maybe towels and bed sheets. Even those, half the time I throw them in with other stuff and just stick to cold. I had no idea that cold water and laundry detergent alone weren’t enough to get rid of all the bacteria.

Since Lysol Laundry Sanitizer is safe to use on colored clothes, I know it’s not going to ruin the bright blues that make Coop’s face stand out better. It’s gentle enough to use on underwear, socks, and bedding, too. Plus, it’s crazy easy to use. Just add it to the fabric softener compartment on your washing machine! If you don’t have one, you can either wait for the rinse cycle to toss it in or get one of those fabric softening balls. I love that it cleans and sanitizes without bleach. Jake has sensitive skin and I can’t use any bleach-based product on his laundry.

Whether you have a toddler who drags “blanky” through the mud while playing outside or a tween who drags it all over the house, you’ll love how Lysol Laundry Sanitizer helps get rid of all the nasties that cling to your child’s most treasured blanket. Head over to Lysol to learn more about it!

Does your child have a special blanket that goes everywhere with him? Share your blanky journey story below!