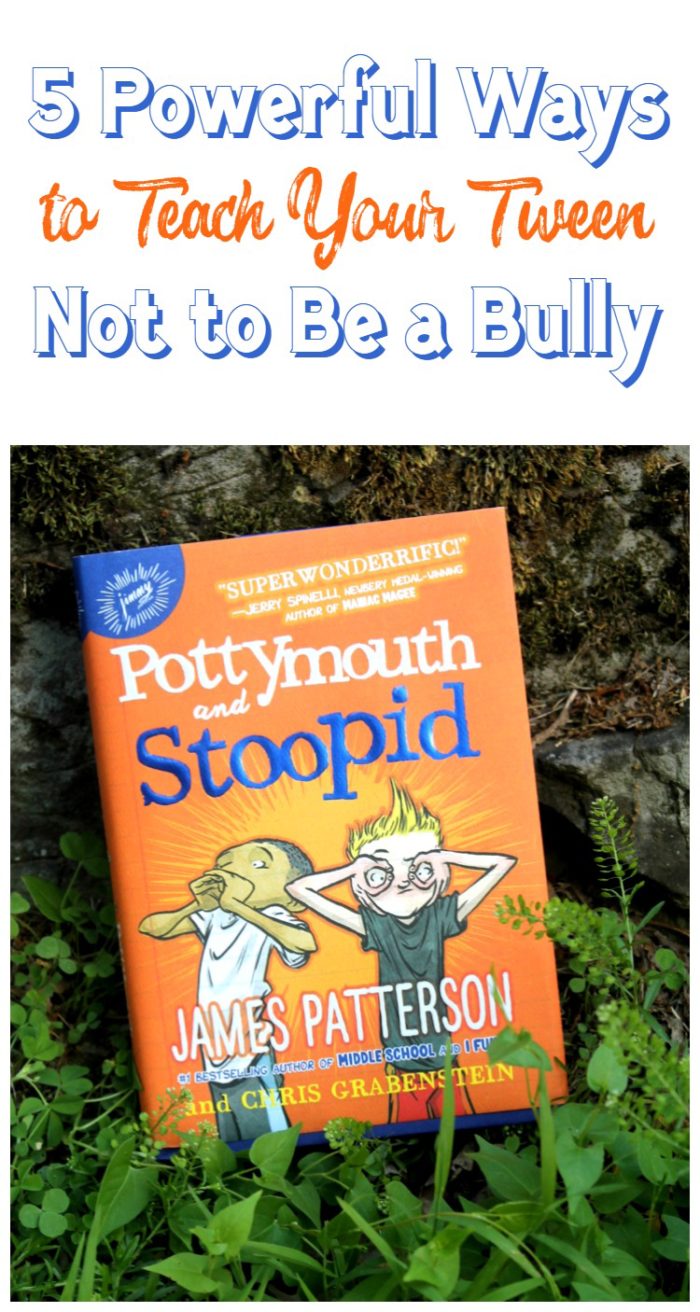 This post is sponsored by JIMMY Patterson Books. All opinions are my own. No one wants to raise a bully. At least I like to hope that’s the case! I can’t imagine a mom looking down into her sweet newborn’s face and softly murmuring “I hope you make life miserable for your classmates in middle school.” I think it’s safe to say that the majority of us strive to raise kind, caring and compassionate children who grow up to become equally compassionate members of society.

Yet despite all of our best intentions, bullying is still the bane of our children’s existence, especially during middle school. I know this because my son just spent his first year of middle school in abject misery. Without getting into too many personal details (I’m very mindful of his privacy now that he’s a tween), let’s just say that I find it hard to believe that any parent would want their child to say the things that were said to my son. I’ve thought long and hard about things we can all do to help avoid raising bullies. Here are a few easy yet powerful things I came up with that we can all do right now. Check them out, then keep reading to learn more about Pottymouth and Stoopid by James Patterson and Chris Grabenstein, plus enter for a chance to win a copy of the book and a $50 Visa gift card!

How to avoid raising a bully

Yes, I know, we’ve all heard this one many, many times. If you want to raise kind kids, you need to show them how to be kind at home. I think we all really try hard to be compassionate and empathetic people when our kids are watching. The problem is, kids are ALWAYS watching, especially when they reach the tween age. Jake is a ninja. He can sneak up on me out of the blue. Sometimes,  I have no idea how long he’s been hovering and listening to me rant on the phone to my friend about someone else. Other times, he’s heard my mom completely lose her cool and berate people on the TV when she disagrees with them.

Both of these things send a message to our kids that it’s okay to be cruel as long as the other person can’t hear you. We all need to work on this a lot, no one is immune to venting. Just try to remember that if your kids are home, there is a very good chance that they can see and hear you. I’m sure my son isn’t the only one with ninja-like skills!

Encourage kids to reverse the conversation

Too often, our kids just don’t think they said or did anything wrong. I’ve chided Jake for things he’s said either to us or to a classmate, only to have him look at me like I have two heads. He just didn’t think what he said was that big of a deal. Next time that happens, reverse the conversation. Play the role of your tween while he plays the other party. Ask him how he feels being on the receiving end of his words. I mean really ask him and talk about it, don’t snap out, “See! How did that feel, huh?” This isn’t meant to be a mean-spirited lesson, it’s meant to instill a deeper sense of empathy towards others.

Teach them to be funny without being mean

This goes along with reversing the conversation, except it’s kind of a preemptive strike rather than an after-the-fact thing. Tween boys in particular seem to want to be the class clown. They want everyone to think they’re hilarious. Unfortunately, sometimes they’re funny at someone else’s expense and cross the line into just plain mean. One way to help our kids learn to be funny without being cruel is by encouraging them to “say it to yourself, first.” Before they crack that joke, have them play it out in their heads and imagine how they would feel if someone said it to or about them. Another way to teach them to be funny without being mean is by giving them some basic rules to follow. Jokes should NEVER involve someone else’s race, religion, appearance or abilities/disabilities. In fact, it’s best to avoid punchlines that involve other people at all. Find some books or websites with examples of humor that doesn’t hurt others for your kids to use as inspiration. Pottymouth and Stoopid, for example, is filled with appropriate humor that kids will love and can draw inspiration from!

Help them learn to “check their emotions”

I don’t mean “check them at the door” or anything like that, I mean literally check their emotions to see if they’re feeling the way they think they are. Just like adults, kids lose their cool when they’re hungry, tired or just plain stressed out. Help them develop a strategy to really evaluate their emotions before they blow up on someone. This is kind of like the whole “count to ten” thing, but they need to take it a step beyond that. I mean, I’ve counted to ten plenty of times and still been upset. I’ve counted to 50 and still been ready to blow! Instead of just pausing to count, they should take those seconds to ask themselves if they are really mad at the other person or are just frustrated by something else.

Jake had an incredibly rough year last year, and not just because of bullying. We lost my aunt to brain cancer right before Christmas last year, and Jake was very close to her. He barely had time to process that when his dog died in February from heart failure. We also lost our two 15-year-old dogs last year, but Cooper was Jake’s dog through and through. Dealing with that much loss in such a short time has been incredibly hard on me, so imagine being an 11-year-old boy and trying to process it. His grief sometimes comes out in bursts of anger, and occasionally that anger is directed towards others who don’t deserve it.

Help them walk in others’ shoes through literature

Books are such magical and wonderful tools in the fight against bullying for so many reasons. Not only do they offer an escape for kids who just need a break from the real world, but they give all kids a chance to walk in others’ shoes. From books about diversity and adversity to stories about kids overcoming bullying, middle-grade fiction is ripe with opportunities to really dive into all sorts of situations and realities and see how others feel.

Pottymouth and Stoopid by James Patterson and Chris Grabenstein is a fantastic example of a book like this. In the story, David and Michael, two best friends, are stuck with nicknames that they got way back in preschool. Now that they’re in seventh grade and even the teachers believe the labels, they set off on a mission to change everyone’s mind. How? They turn their misery into megastardom! The story follows the boys’ journey as they transform from the “ultimate losers” into the biggest winners. Beyond the laughs and the cool illustrations,  Pottymouth and Stoopid also shows kids that things CAN actually get better. As a reader, I’ve been a fan of some of Patterson’s grown-up works for a while (mostly his Women’s Murder Club series). As a parent and a passionate supporter of literacy, I’m an even bigger fan. His JIMMY children’s book imprint is filled to the brim with books that address the issues facing our middle-graders and written in a style FOR our middle-graders. Even the most profound story about bullying is pointless if our kids can’t get through it, after all. Did you know that Patterson also puts all the proceeds from his JIMMY imprint back into pro-reading initiatives? That is insanely awesome.

Pottymouth and Stoopid is now available in your favorite bookstore. Visit the Official Site for more information. Follow JIMMY Patterson Books on Twitter, Facebook and Instagram to keep up with news, and use the hashtag #PottymouthandStoopid to follow along with the conversation.

Like I said, no parent WANTS to raise a bully. I also think that the majority of our kids don’t really want to be bullies, either. Sometimes, though, despite everyone’s best intentions, it still happens. Our perfect little darlings fall on the giving end of nastiness.  Either they’re faced with a situation that they don’t know how to handle a better way or they develop a reputation that they don’t know how to get rid of. It’s up to us to give them the tools they need to choose better. Giveaway has ended! Congrats to Rose D! Thank you to everyone who entered! Be sure to come back for more great giveaways soon!

What are some of the things you do to make sure you’re not raising a bully? Share below!