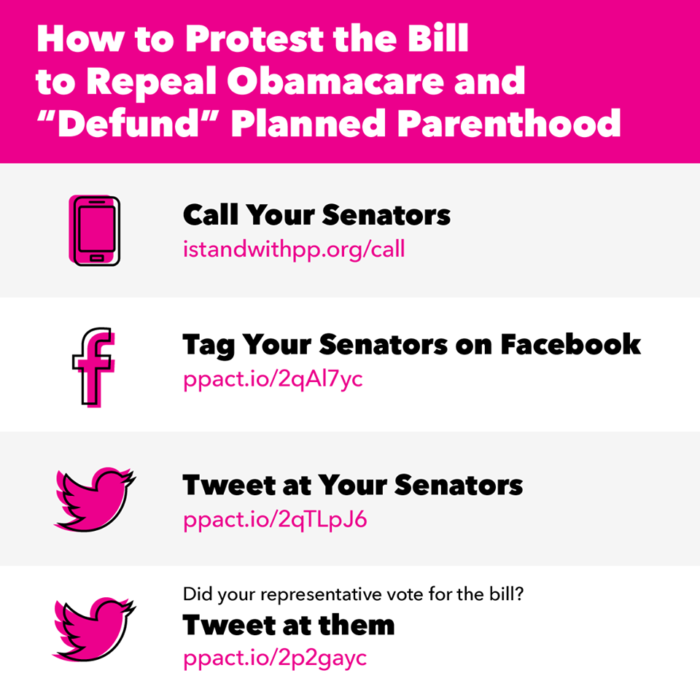 Let’s talk about Planned Parenthood, because honestly, I think way too many people still don’t understand exactly what they do for women in this country. That misunderstanding is about to cost many women access to much-needed reproductive health care. Right now, as we speak, women all over the country are at the risk of losing access to Planned Parenthood if the AHCA passes.  I know I rarely talk politics, but this isn’t a political issue, it’s a women’s health issue. A major women’s health issue. Planned Parenthood: It Isn’t What You Think It Is!

Way too many people still think that Planned Parenthood is all about helping women terminate pregnancies. This is just not true. Planned Parenthood is so much more. It’s a place where women with less than stellar insurance (or none at all) can get access to pap smears, breast exams, routine pelvic exams, treatment for STDs, and services to PREVENT unwanted pregnancies. It also provides educational programs and outreach to 1.5 million people every year. Planned Parenthood provides services not just for low-income women, but also for women in rural areas with very few other options, as well as members of the LGBTQ community who are often discriminated against by other medical providers. Nicole stands alone in the run-down 2-bedroom apartment that she shared with her son for the better part of 20 years, wishing she could scrape together enough money to go visit him in Japan. She’s so proud of him for joining the Navy and getting out of this town. He’s seeing the world, something she always wanted to do. He’s been gone for 8 years now, enlisted the day he turned 18. Nicole hung onto the rent-controlled dive in case he wanted to come home, but he got out of dodge and never looked back. She couldn’t blame him, she would have done the same thing. Sure, he writes, sends pictures, even a little money from time to time. He doesn’t even know that she’s sick. Has been for a while. She can’t afford to go to the doctor anymore and doesn’t want to be a burden. So she hides it. Let him be free. He doesn’t deserve to pay for her mistakes.

I’m far from the only woman with a “what if there was no Planned Parenthood” story. Millions of women’s lives would be affected in many different ways if they shuttered their doors. Joss Whedon, who is pretty much the coolest guy on the planet (except when he’s killing off beloved characters), created this powerful video showing us three different “Sliding Doors” type stories:

The Other Side of Planned Parenthood: The Happiest Day of My Life

That’s not really what I wanted to talk to you about, though. See, I have a very different sort of Planned Parenthood story than most people. They confirmed the happiest moment of my life! As many of you know, I spent six years trying to get pregnant. Well, when it finally happened, my husband had JUST lost his job. Like, a week after I conceived (and a week before I found out). He was searching like crazy for a new one, but in the meantime, I had no insurance. Which means I needed to go on Medicaid.

This is the actual first pregnancy test I took to find out I was pregnant with my son! You bet I snapped a pic!

In order to get Medicaid back then, you had to prove that you were pregnant. A home pregnancy test wasn’t enough. Believe me, I had a pile of those! I didn’t have $90+ to go to a doctor and get one. So, two days before Thanksgiving, my mom, my husband and I headed to my local Planned Parenthood. The place was actually pretty empty that day. I explained to the woman there what I needed, and she warned me that their test may not pick up my pregnancy this early on. I said I understood but wanted to try anyway. $10 and twenty minutes later, she happily confirmed that I was absolutely, 100% pregnant.

After SIX LONG YEARS of trying and failing, I was FINALLY pregnant, and I had proof from a real medical professional. Without that proof, that piece of paper and that amazingly kind, caring and happy-for-me woman, I would have gone nuts. The anxiety would have driven me literally mad. I needed that proof. Six years of TTC takes a mental toll on you that you wouldn’t believe if you didn’t experience it.

Planned Parenthood stood with me on the happiest day of my life, so I’m standing with them during the hardest days of theirs. I’m asking you to please consider doing the same. At the very least, learn the facts. The real facts. Not the “alternative facts” that certain parties use to push an agenda, but the REAL, honest to goodness facts about what Planned Parenthood actually does for women. Here are a few resources to get you started:

Please help pressure the Senate to vote against the AHCA and the “defunding” of Planned Parenthood! Learn 4 ways you can get involved to protest the Bill to repeal the ACA.