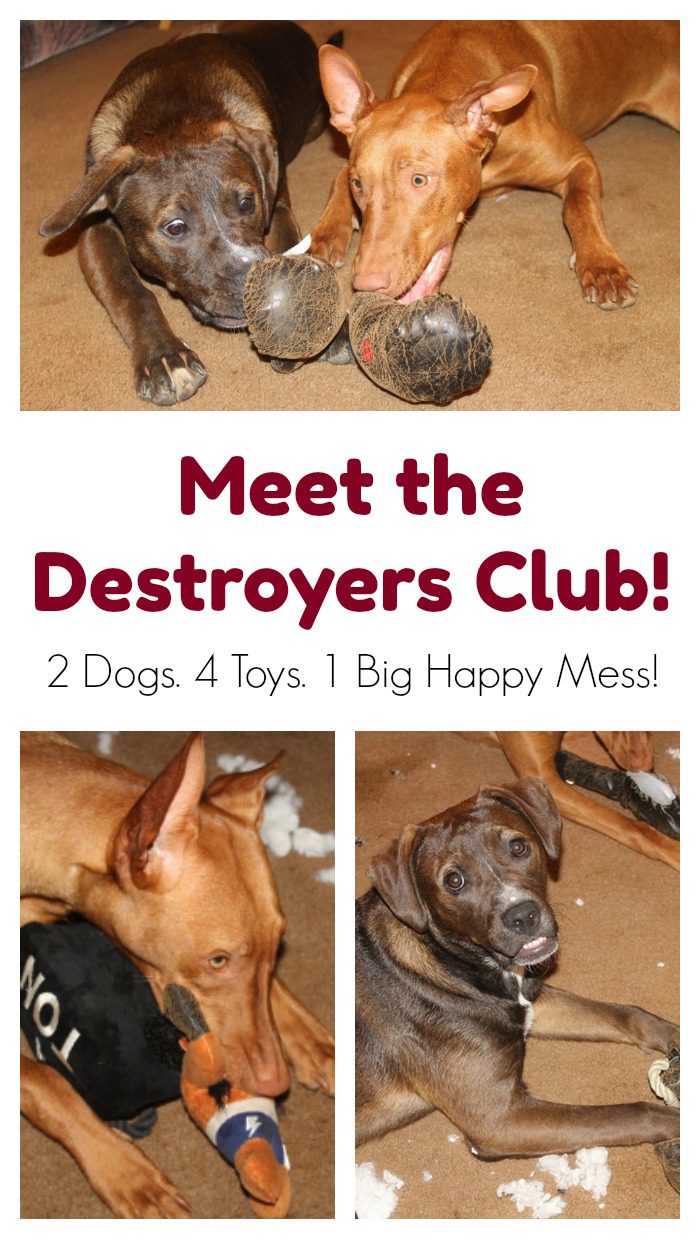 This is a sponsored post written by me on behalf of BARK. All opinions are 100% mine. Did you know that BARK came out with a special club just to celebrate your dog’s love of toy destruction? Totally true story! My dogs were thrilled, I tell you. Thrilled! We had such a blast discovering their inner destroyer personalities! I can’t wait to show-and-tell you all about it so you can learn more about Destroyers Club. First, though, a little background for those who don’t know my girls.

Meet the Destroyers: Mocha and Freya!

As some of you know, we introduced two new dogs to our family over the last year: Mocha and Freya. We lost all three of our senior dogs within a year, and this is the first time we’ve had puppies in ages. Wow, guys, I forgot how much work they are! I always joke that if you’ve had a toddler you can handle a puppy…and vice-versa. I’m starting to think a toddler is easier! At least their potty training accidents don’t require an arsenal of stain removers. Like raising a toddler, though, raising a puppy is totally worth it. There’s nothing quite like a puppy kiss after a rough day. Well, unless said puppy was raiding the cat’s litter box!

So, Mocha and Freya. My goodness, they are like night and day! Freya is a Pharaoh Hound and SUPER high-energy. Like, “did someone spike her water with a triple espresso” energy. She’s all legs and ears and neck. Here she is giving one of her famous Pharaoh Hound smiles! Look at those teeth! They play a huge role in her destructive style, as we’ll see later on. Mocha, on the other hand, is chilled. More like a decaf iced mocha latte than an espresso. Okay, yes, I have coffee on the brain. What else is new, right? Mocha is content to just relax on the couch with me, binging on old episodes of whatever show I suddenly decided I had to watch from start to finish again.I’m not really sure what kind of dog she is. We were told lab/greyhound, but I think she’d got a few other breeds mixed in. Here she is pre-destruction, on the nice clean living room floor. Sometimes Freya drives her batty because she just wants to sleep and Freya wants to play. Mocha does have her energy spikes, though. When the two of them spike together, watch out, world (and shoes, sofa, living room lamp, and anyone who happens to get in the way).

BARK has identified four different destructive styles, and we’re going to figure out which fit my dogs the best. Especially Mocha, since she’s practically brand-spanking-new to the family. We’ve had Freya since November, but Mocha just arrived a little over a month ago. We’re still learning her personality. Tell me if these destructive styles sound familiar to you:

I think they’re all pretty self-explanatory, right? So how do you figure out which one your dog leans towards? Why, you plop a box of Destroyers Club toys on the floor and see what happens! We got the World Chompionship Bundle from the Totally Ripped collection, which is perfect for pet lovers (or pets!) who live active lifestyles. Honestly, even if you’re not a weekend warrior, your dogs will absolutely love these toys. It includes:

Okay, let’s let the destruction begin! Check out this quick video and please pardon my messy slipcovers on the sofas. The dogs did that, too!

My girls were beyond thrilled that they not only got new toys, but that they are actively encouraged to “go forth and destroy toys.” Freya did a bit of showboating but Pharaoh Hounds are often raised to be show dogs and I think some of that comes through in Freya. Mocha was a bit shy at first. While Freya already knows what to do when the camera comes out, Mocha is still learning to be a blog dog. She quickly got into the groove of destroying, though. I was really surprised to learn that Mocha is a pretty mellow Defluffer. I suppose it shouldn’t surprise me, since she’s such a chilled dog, but honestly, I figured she was a total shredder. I never really watched the two of them destroy before and I just assumed based on the sheer mess that they were both involved in totally shredding their toys.

This time, though, I sat and really watched. Mocha starts out pretty calm, gently chewing on the corner of a toy. Freya wants ALL of the toys to herself and runs back and forth frantically, trying to figure out which to start with. While Freya lets her Thrasher personality come through, Mocha just kind of sits back and waits to grab a toy. Eventually, Freya settles down to become a Defluffer. She searches for seams, using her scissor-like back teeth to pull the toy open, and systematically rips out all of the stuffing. Meanwhile, in the other corner, Mocha is still quietly chewing. She plays with toys like she eats food: birdlike and daintily. Soon, she manages to make a little hole and starts casually defluffing. Back in the other corner, Freya has gone back to prancing around thrashing Furricane Floyd’s gloves around. Mocha spies an opening and dives in to grab the other side. Both dogs LOVE tug, and the gloves are absolutely perfect for it. After a quick game of tug, they settle in to defluff a bit together. Don’t you just love those wide eyes? This is probably the funniest picture I’ve ever taken of them together, and I’m one of THOSE dog moms. I have as many pictures of my dogs as I do of my son! When the stuffing comes flying out,  Mocha springs to life. She loves rolling around on the floor after a good stuffing storm! After a destructive job well done, the girls are ready to go outside for a bit and I’m ready to clean up the resulting chaos.

All in all, my girls were totally successful in destroying the Destroyers Club Totally Ripped toys! I was really happy with how long they actually lasted. While I’m all about letting my girls unleash their destructive toys in a safe way (and not on my shoes, which happens way more often than I would like), I also like when they actually get more than 5 minutes of fun out of their new toys. All of the Totally Ripped toys brought them at least a good hour of joy, and they’re not completely destroyed yet. Furricane Floyd is currently missing his head, but there’s actually still a squeaker in there waiting to be discovered! The gloves are destuffed, but still perfect for a game of tug. And oh, those squeakers! I wish my girl Maia was still with us. She would have passed out with joy when she saw them. They are HUGE and strong and super squeaky! Kind of like Mocha! Seriously, she squeaks when she barks. It’s the funniest thing. Except when she sees a raccoon, squirrel or rogue leaf. Then she’s all business with her “stay away from my family” bark.

So, what did I learn about my dogs’ destructive personalities? Well, like I said, Mocha is a quiet Defluffer. Freya, on the other hand, can’t choose and wants to be ALL four! I also learned (or had it reiterated) that celebrating our dogs’ inner destroyer isn’t just fun for them, it’s fun to watch, too! Here’s the thing: dogs love to rip, shred, thrash and tear things apart. It’s part of their nature. We can either embrace and celebrate that by giving them access to safe toys designed for the destructive style, or we can kiss our favorite shoes goodbye and spend our days retrieving the oddest things imaginable from their mouths.

With BARK’s Destroyer’s Club, you can easily shop for the perfect toys for your dog’s personality AND even earn points and share their joie de destruction with other dog parents! Destroyers Club members earn points to unlock free prizes like trophy toys and credits by submitting photos of their dog’s destruction skills or buying Destroyers Club toys.

Head over to BARK to shop all Destroyers Club toys. Make sure you join the club to unlock prizes!

What destructive personality does your dog have? Tell me all about it below!