10 Reboot & Revival Shows Worth Watching (and 5 I Wish They’d Bring Back!) 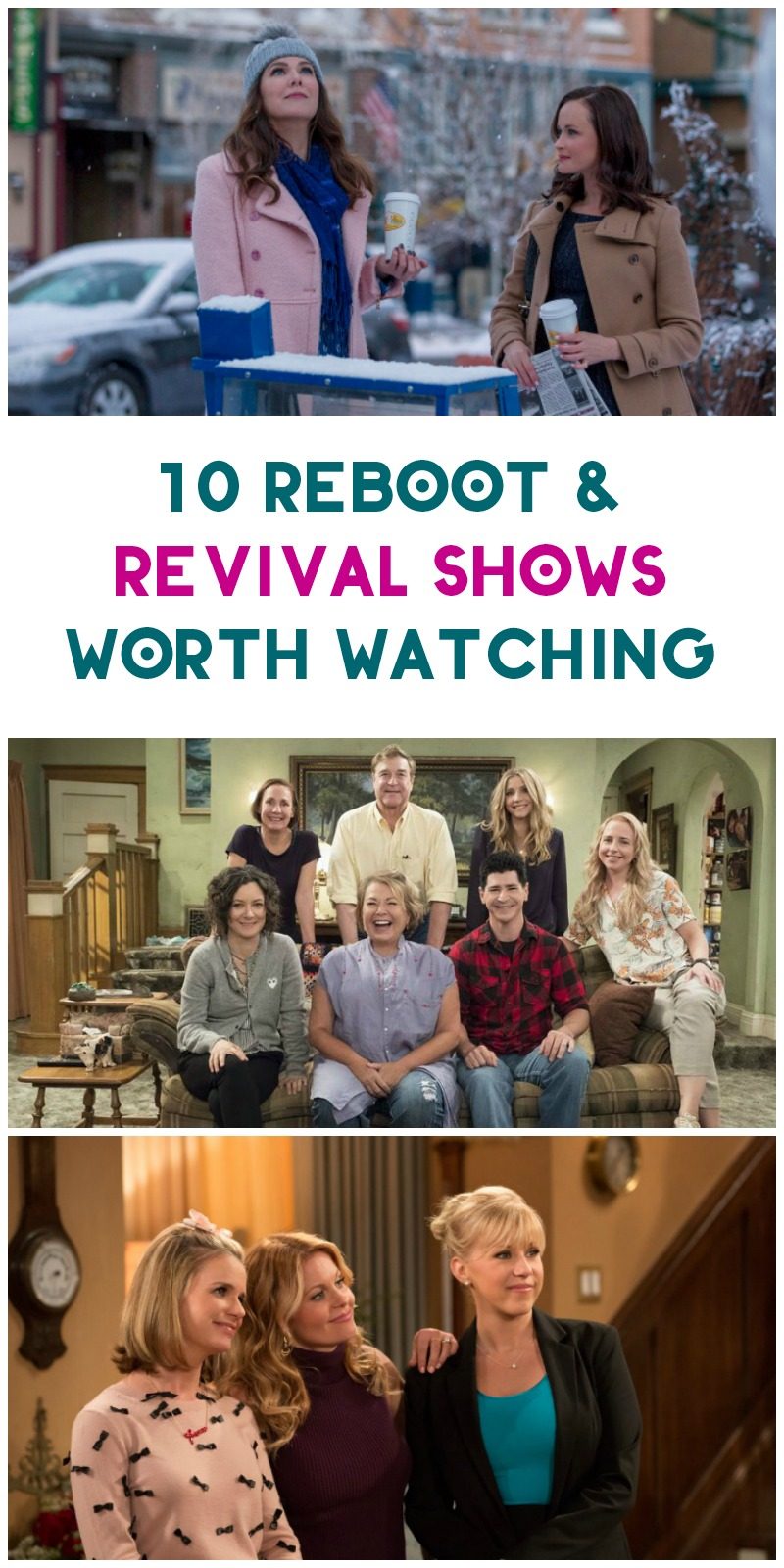 Everything old is new again, especially when it comes to revival shows! With all of our childhood favorites making a comeback, it’s hard to decide what to watch first! I’m sharing my picks for 10 revival shows worth watching, along with five shows I really wish they’d bring back! How much are you loving all of these reboot/revivals of all your favorite old shows? I feel like we’ve totally stepped back in time and get to relive the best parts of our youth. Well, maybe not the best parts, I did have a life back then so TV wasn’t the highlight of my evening, lol. It seems like everything that was out in the 80s and 90s is making a huge comeback. Shows are either getting a complete face lift for a new millennium, or (even better) they’re diving right back in with the same cast and showing us what life is like for our TV BFFs these days. If you’re not sure where to start, here are my top 10 favorite revivals (a couple aren’t even out yet, but I know I’ll be tuning in)!

I’ll be honest, I wasn’t planning to watch this one. While I watched Full House as a kid, I found Stephanie and Michelle equally annoying. My husband watched it on Netflix one night when he was bored, though, and said it was actually pretty entertaining. So I gave it a shot. It’s funny because now Stephanie is my favorite character on the show! Michelle isn’t in it, since the Olsen twins are busy doing other things. This revival is totally hokey, yes, but that’s the charm in it.

This one is more a continuation than a total reboot. DJ, now a widow, is raising 3 boys alone until her sister, Steph, and her lifelong best friend, Kimmy, move in to help her. DJ is very much like her dad, Steph takes up the Uncle Jesse mantle, and Kimmy fills Joey’s clown shoes.

2. Gilmore Girls: A Year in the Life

Of all the revival shows, this was the one I most looked forward to watching. Gilmore Girls was one of my top 5 favorite shows of all time, so I had very high expectations. Unfortunately, it didn’t quite meet those expectations. I loved it, don’t get me wrong, but I was more into the Lorelei/Emily/Luke story lines than Rory’s. I feel like they made her a bit of a flake. She was still smart, but a lot more scatter-brained than I thought Rory would turn out.

The ending of the show will leave you wanting more, but don’t expect that cliffhanger to be resolved any time soon. According to a TV Guide interview, there are no plans in the work for a continuation of the revival. That makes sense, I suppose, because the last two words of the show are the exact words that were originally supposed to end the series years ago. I think that’s all the closure we’re going to get. Watch this one on Netflix.

While the Roseanne revival doesn’t start until March, I already know it’ll be one to watch. The original show is one of the few sitcoms that I can watch over and over again. All of the original cast/characters are coming back, including Dan and both Beckys. From what I understand, we’re all just going to pretend that Roseanne didn’t tell the world that Dan was dead in the finale. Lecy Goranson will resume her role as Becky, while Sarah Chalke will play another character. She’ll hire Becky to carry her baby. Roseanne premiers on ABC on March 27th.

The Satellite of Love is back in orbit, thanks to a Kickstarter campaign. The MST3K revival stars Felicia Day as the mad scientist in charge of torturing Jonah (the new Joel, or Mike if you came into the show later) by forcing him to watch horrible old B movies. He manages to keep his sanity by mocking the movies, with help from his robot friends (ROBOT ROLL CALL!): Cambot, Gypsy,  Tom Servo, Croooow!! Tom Servo and Crow are his movie-watching buddies.

I haven’t had a chance to watch all of the episodes yet, but the few I did watch are almost as good as the old show. Nothing is ever quite as perfect as the original, of course. I LOVE Felicia Day as the mad scientist. I just love Felicia Day in general. She’s incredibly talented! Find this one on Netflix.

Will & Grace are back together again! After her marriage (to Harry Connick Jr) fails, Grace ends up moving back in with Will, who also isn’t doing to swell in the relationship front. Will is still living across the hall from Jack (Just Jack!) and Karen still works for Grace at her interior design company.

The original series ran from 1998-2006, so it;s been off the air for less time than many of the other shows on this list. The characters haven’t changed much, and that’s a good thing. I loved them just the way they were! I love how the show weaves in social and political messages in a funny way. While there’s nothing funny about what’s going on in the country today, I think that you reach more people through laughter than by soap-boxing.

This is another one I didn’t think I’d like. I barely remember the original. It aired when I was just a few months old and ended when I was 10, so I didn’t really watch it. My mom and aunts did, though, so I recall some of the details. Mostly Schneider. While he wasn’t the main character, he was definitely the true star of the show! The new One Day at a Time on Netflix is a complete reboot. This time around, Justina Machado plays Penelope, a newly single mom and former Army nurse raising a rebellious teen girl and a tween boy. Her old-school mom moves in to help. There is a Schneider, but he’s not quite the same goofy guy as the original.

Showtime revived David Lynch’s cult classic from the early 90s (I remember watching it when I was in high school). The limited series event (that basically means that they made so many episodes, then may or may not continue) takes place 25 years after the original finale. I haven’t had a chance to watch this one yet because I don’t have Showtime. I am getting it for a month through Amazon once Shameless season 8 is done, so I can binge on everything at once, then cancel until I need it again. Since I loved the original (in my senior year book under aspirations, I said I wanted to one day star in a David Lynch movie), I’ll definitely watch the revival. I’m a little disappointed to hear that it takes place in other locations besides Twin Peaks (like Vegas), but I still think it will be fun to watch.

While this revival/reboot has been out for a few years now, it’s still high on my watch list. Well, at least it was until Daniel Dae Kim and Grace Park quit because they weren’t receiving fair pay. While I like the new characters well enough, it’s just not the same. With Steve (Alex O’Loughlin) leaving the show at the end of this season and Danny (Scott Caan) only appearing in maybe half of the episodes, I think that this will probably be the last season that I watch. Still, the first 7 seasons were pretty fantastic. It’s based on the show by the same name that started in 1968. I never watched the original (I wasn’t even born yet).

In case you haven’t heard, FOX revived the X-Files for a limited series event last year, then brought it back for another limited series event this year. See what I mean in regards to just what a “limited series” means? I loved last year’s run of the revival, but feel like this season got off to a weird start. Yes, I know, it’s the X-Files, it’s supposed to be weird. I just thought they were trying too hard to be surreal. The show is surreal enough without trying!

Just about everyone from the original run is back, including Skinner and the Cigarette Smoking man. It’s hard to say anything about this revival without giving away key plot points, so I’ll just leave it at this: if you liked the original, watch it! If you didn’t like the original, or only sort of liked it, you’re probably not going to be able to get into the new episodes.

Okay, so this is a kiddie show AND it’s not even coming back until like 2020, but have you heard??? Hulu is rebooting Animaniacs! If you can’t wait, you can watch all the old episodes now on the streaming service. I learned so much from the original through all their fun songs.

Another cult kiddie classic- Tiny Toons- also has a new home on Hulu. I wish they did this years ago when I was searching for both shows for my son. I ended up buying Tiny Toons on DVD.

While those 10 reboots and revivals should keep me busy for at least a little while, there are a few shows that I’d love to see make a comeback! If anyone has heard about any of these being in the works, let me know please!

What about you? What are some of your favorite revivals? Which shows would you love to see make a comeback?