5 Home Remedy Safety Tips That Could Save Your Life 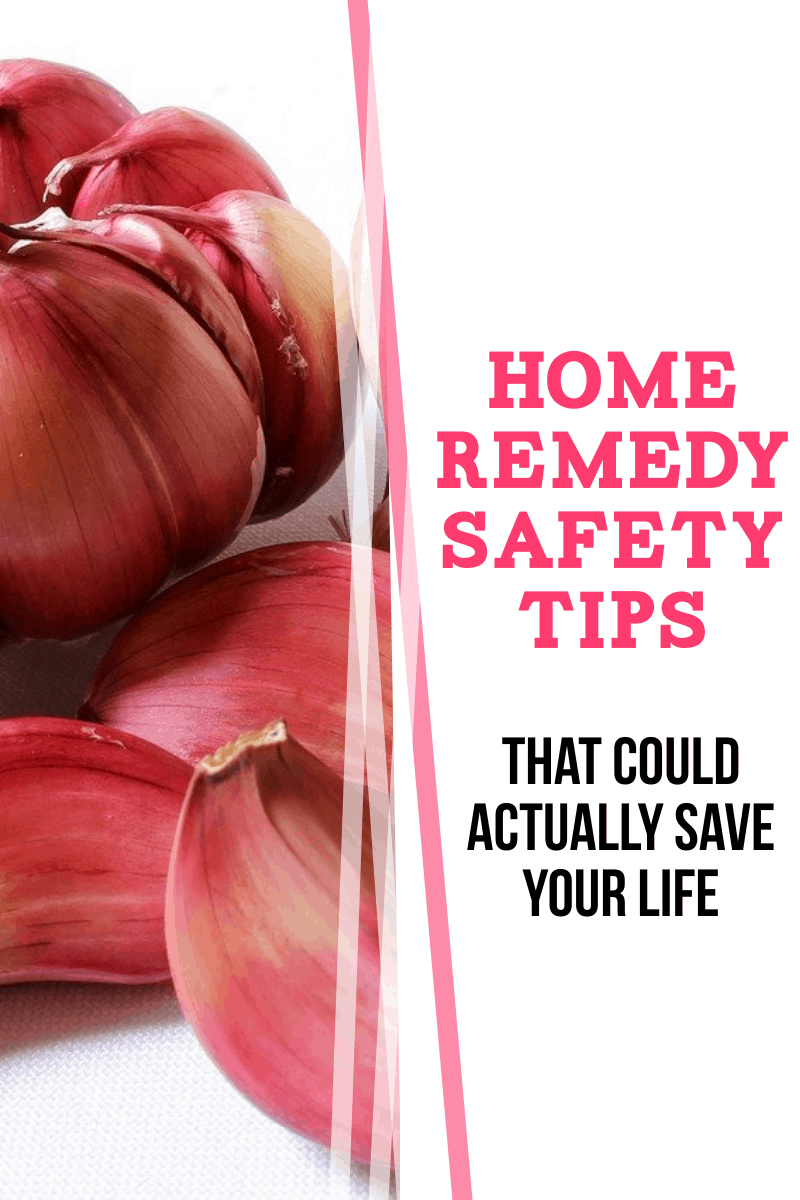 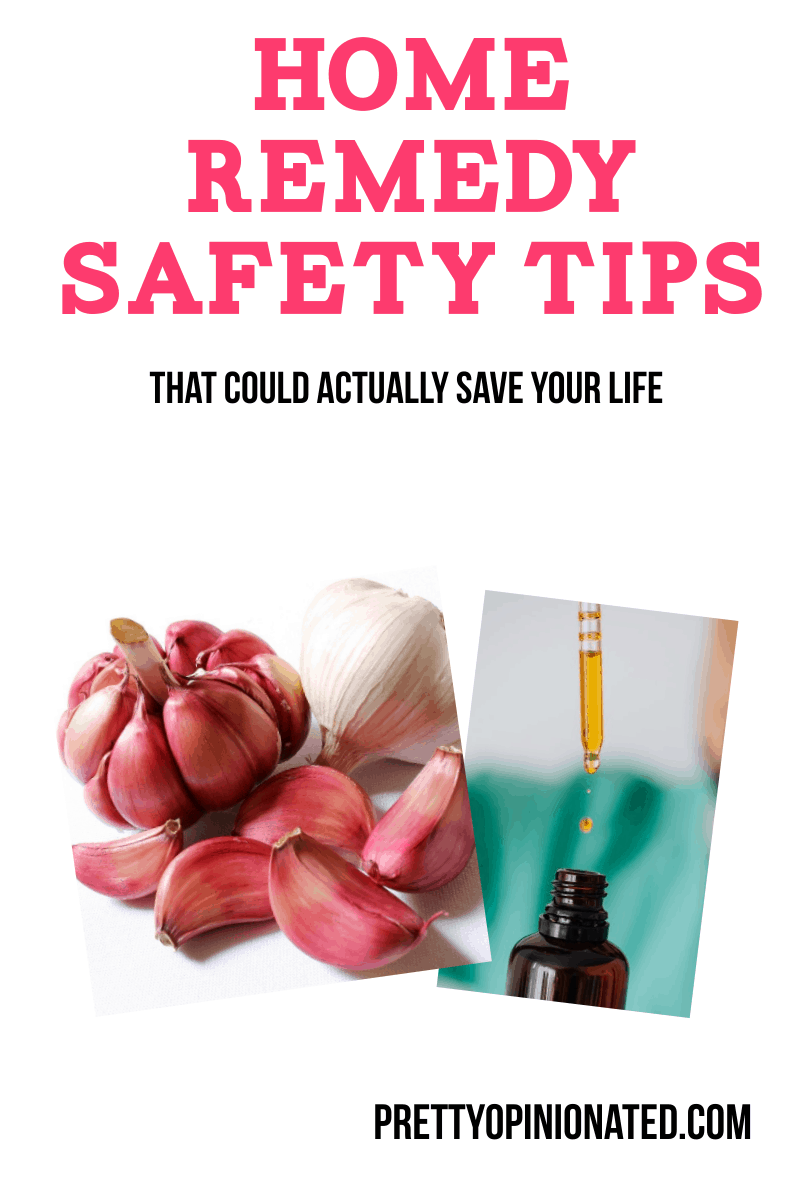 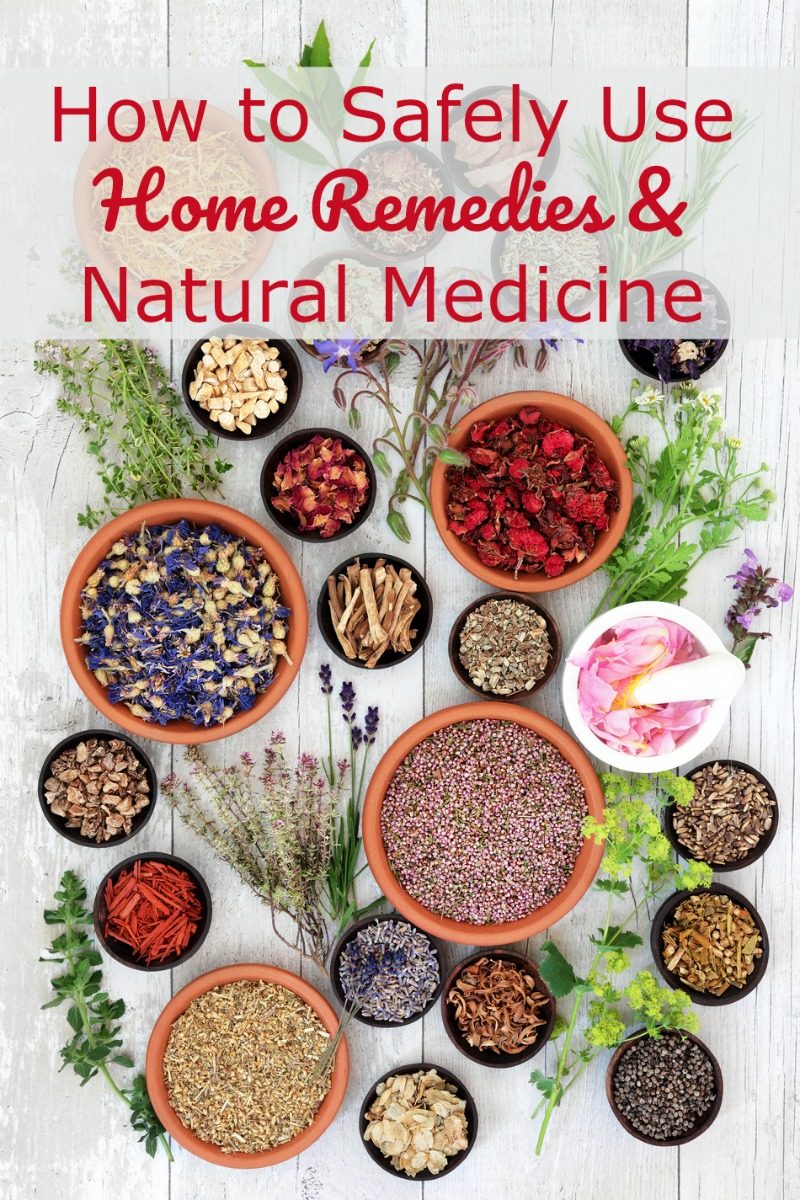 Home remedies are a great way to save money & take charge of your health, but they can be deadly when used incorrectly. Check out 5 “should be common sense but apparently isn’t” home remedy safety tips that just might save your life! I remember when I was a teenager, I used to love curling up with my grandmother’s As Seen on TV copy of the Complete Guide to Home Remedies book (or something like that). I read that thing cover-to-cover many times. Years later, I started researching other types of natural remedies and alternative medicine. It became a passion.

At the same time, I began researching modern medicine as well. I eventually went to nursing school, although I didn’t finish. So many people believe it’s an either/or sort of thing. You’re either all about natural remedies or you’re a skeptic who only embraces modern medicine. In my opinion, the either/or people are missing out on entire worlds of healing possibilities. These days, the scales are tipping back in favor of home remedies and natural solutions. As much as I love that, I often see people using these methods in ways that make me seriously worry for their well-being. I think it’s time to talk a bit about how to use these things safely.

Common Sense Disclaimer: I am not a medical professional. I almost became one, but like I said, I didn’t finish. Nothing I say is meant to be taken as medical advice. I am speaking from experience and years of research, but you should always consult your doctor about any concerns you have. Okay?

First, let’s talk a bit about the differences between a home remedy, a natural remedy and alternative medicine as a whole. Many times I see home and natural remedies lumped together under the same heading. They’re not always the same thing.

What is a Home remedy

A home remedy is a treatment for an ailment that consists of foods, common herbs and spices, and other things that are found in the average home. For example, using ice in a baggie to soothe an achy back. The ice and the baggie are items that most people have readily available. Typically they’re also natural items, but sometimes they’re not. What is a Natural remedy

On the other hand, a natural remedy is a treatment for an ailment that consists of items found in nature, like teas made with plants, essential oils, etc. While home remedies are usually natural, natural remedies are less frequently “home remedies” because we have to go out and buy the EO’s, herbs, etc. Garlic for a really awful toothache is an example of one that is both. Catnip for indigestion isn’t really a home remedy unless you happen to have catnips plants growing outside like I do.

A lot of what I’m going to say here is common sense. The problem with common sense is that when we’re in the thick of pain, it seems to go out the window. When I was looking for remedies for my toothache, I was in such excruciating agony that I was willing to try just about anything. Same with when I have a migraine. I just want the pain to stop. The time to talk about common sense precautions is before you’re in agony.

1. Loop your doctor in

The most important safety tip for using home & natural remedies: make sure your doctor knows what you’re doing! I cannot even begin to express the importance of this if you have a preexisting medical condition or you’re on medications.

More and more doctors respect natural medicine as a complement to modern meds, so your doctor isn’t likely to ridicule your desire to go a natural route. If he does, get another doctor that you’re more comfortable with.

Again, this is something you need to do before you’re in agony. When I say “do your research,” I don’t mean ask a bunch of your friends what they’ve tried or hop on an internet forum and take the advice of someone that goes by “anonymous4587.”

When I was researching the best natural remedies for coughing, I spent hours going through different legit websites to find the best possible SAFE options. You’ll want to skip any result that is blatantly an ad (which, unfortunately, is usually the first half of the first results page).  While it’s absolutely possible for a site that’s trying to sell you something to provide accurate info, it’s still going to be slanted towards their agenda.

On Google, I also don’t really recommend going with the first source inside that little “answer” box. Websites use a lot of tricks to get into that answer box, just like they use a lot of tricks to rank #1 in a search. Those tricks get them positioned higher but don’t necessarily mean they’re the best source. Yes, you can check them out, but make sure to also check out other websites. You want to dig beyond the first page of search results to get the best possible picture. Once you’ve narrowed down a few options, dig even deeper before you try anything that is “different.”. Some things, like taking honey for a cough, are so safe that you don’t really have to go much further. It’s one of those “it doesn’t hurt to try” things (unless you’re allergic to honey, or trying it in a baby under age 1, of course).

Herbs are a little different. Even the most innocuous and common herb can have dangerous side effects when combined with certain medications. You absolutely need to talk to your doctor first.

3. Do not ingest things that aren’t meant to be ingested

I shouldn’t even have to say this, but I’ve seen enough people talking about it on natural remedy forums that it bears mentioning: DO NOT drink bleach or other household cleaners, and don’t ingest things that simply are not meant to be ingested.

I kid you not, I saw someone talking about swishing their mouth out with bleach to cure a toothache. Yeah, that’ll cure it real fast…by giving you a whole new set of serious problems to worry about (if it doesn’t kill you first)! I know you’re smarter than this.

4. Remember, you CAN overdose on natural remedies

I think this is one thing that a lot of people don’t really understand: just because an herb isn’t recognized as a medicine by the FDA doesn’t mean it’s not real medicine capable of seriously harming (or killing) you in large quantities.

I read the most uninformed and ignorant response to the question of “can you overdose on herbs” when I searched for it. What’s scarier, this result came up in the top 10 and the quote was right on the front page of the search engine. The person said something to the effect of “herbs are just herbs, that’s like saying eating too much lettuce is dangerous.”

Seriously? Well, first, if you ate just lettuce for every single meal, yeah, you’d probably die from malnutrition at some point! Second, herbs are not “just herbs” when you’re using them for medicinal purposes. For example, basil is known for its ability to help lower blood pressure. Throwing a bit on your pasta and using it responsibly could be beneficial. Eating a ton of it every day, on the other hand, could cause a dangerous drop in your blood pressure, and yes, there is such a thing as too low. It’s called “bottoming out” and it will kill you.

Once you’ve decided on an herbal remedy (and assuming you’ve already talked to your doctor and done the research), I suggest talking to a natural medicine practitioner (a trained one) to determine the right dose. If that’s not feasible, then stick the the “serving size” on the label.  Don’t think to yourself “gee, a little makes me feel better, a lot will make me feel great!” or “One capsule isn’t working fast enough, I’ll take 10!” In most cases, herbs take a little longer to work than chemical-based meds.

5. Use caution even with “external” remedies

For the most part, we’ve been talking about the things that you ingest, but “external” remedies can be dangerous, too. For example, using a heating pad too long can actually damage your skin. I’m not just talking about minor burns or redness, it can seriously damage the cells. Essential oil roll-ons can cause issues, too, since they go through your skin into your system. Essential oils can also enter your respiratory system when inhaled.

You’ll also want to follow the common sense rule in tip #3. Don’t douse yourself in bleach or other substances that aren’t safe for human skin. If you wear gloves when you use it to clean, it doesn’t belong on your body as a home remedy.