I’m not a Millennial, but Here’s Why I’m STILL Your Target Audience! #DisruptAging 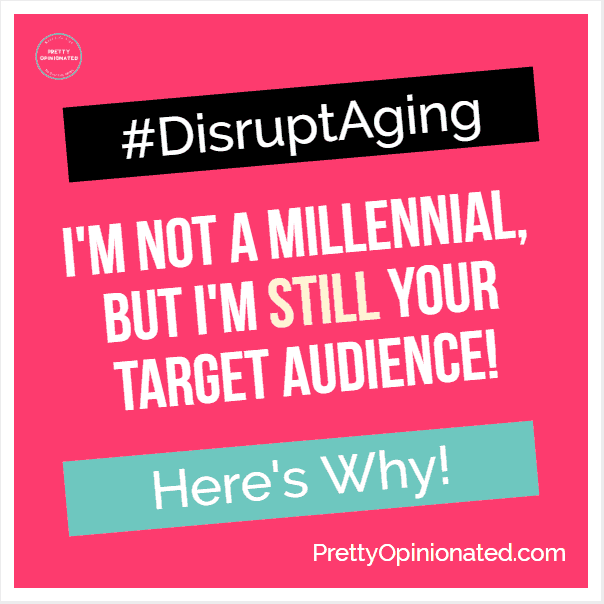 This post is made possible with support from AARP’s Disrupt Aging. All opinions are my own. “Sorry, you’re not our target audience. We’re only looking for millennials.”

How many times have you heard this before? I know I hear it more and more every day. Whether I’m applying for a blogging campaign, taking a survey, or even just trying to share my opinion about a new show or product, it seems like now that I’m over 35, I’m too old to matter. I’m not the target demographic.

Yet I should be! Here’s why! So, fun fact: I’m 43 today. There, I said it. 43. I may over the proverbial hill (I so hate that saying), but guess what? I’m still your target audience! Why? Because…

#1 I read just as many young adult books as teens do!

Adult women in their 30s and 40s spend just as much (if not more) on their books as teenagers do. In fact, at least 90% of all the books I read are geared towards a teen audience. Not only are we reading your books, we’re writing them, too! My mom works with an amazing author who about my age (give or take) and her latest series centers around teen vampires.

Contrary to popular belief, we’re not reading them because we’re lusting after our teen years or trying to live vicariously through the characters. We just like the stories. Plus, I love seeing teenagers portrayed as the brave, intelligent, and powerful people that they are. I think teens get hit just as hard with ageism myths as adults. Just because a few misguided kids went viral doing outrageously dangerous things doesn’t mean the entire generation is doomed. Throughout history, teens have been the driving force for much of the positive change in the world!

I was dying my hair purple, shaving the back of my head, and wearing all black long before it became cool…or socially acceptable! I remember when I was 16, my aunt took me to get my hair dyed a gorgeous shade of plum. Alas, it didn’t quite take and I ended up with bright orange hair, a la the lead singer from Lush. My school told me “dye it to a color that occurs in nature, or don’t come back.”

Flash-forward 20+ years, and now it’s perfectly acceptable to be a nurse with pink hair, a doctor with blue hair, a banker with rainbow stripes. My generation did that for you, so you’re welcome. FYI, I was going to take a more recent pic, but my face collided with my dog’s hard head last night and I look like I lost a fight!

And guess what else? I’m STILL the same punk rock girl that I was 25 years ago. I’m still wearing my favorite band shirts and holding my own in mosh pits. I’m still blaring the same punk rock songs in my car when I’m driving alone. I still have the same ideologies, too. I’ve just honed them a bit and learned when to speak up and when to work silently behind the scenes. 😀

Have you ever seen all those memes that go something like “My idea of a fun Friday night is staying up until 11 watching Netflix,” or something along those lines? Well, that’s me. Well, while some of us over-40s still have plenty of energy for clubbing, a lot of us have reached the point where we’re thrilled to relax on a Friday night in front of the television. Just like with YA books, we’re watching your teen-driven shows, perhaps more often than the your target audience.

My top three favorite shows of all are Buffy the Vampire Slayer, Gilmore Girls, and Charmed. Aside from Charmed, they all have one thing in common: teenagers who kick butt either physically or academically. The Charmed sisters are slightly out of their teens, especially by the end of the series,  but they definitely still kick major demon butt! Do you really think that once we hit age 40, we no longer love new makeup, cute clothes, or the latest and greatest healthy popcorn brand? We like to look adorable and eat healthy, too!

I spend just as much time (and money) at the makeup counter as my younger counterparts. I have an entire 3-drawer organizer filled with the latest and greatest shades of lipstick, colored mascara, and sparkly blush; a shelf filled with yummy-smelling lotion; and a shower lined with the latest shampoos & deep conditioning hair products.

One last (but definitely not least) reason that you really shouldn’t count out GenX: if we’re not buying your products, we’re making decisions for those who are! Think about it: most of our children fall into the millennial or GenZ generations. Since millenials live at home longer than any other generation (35% live with their parents, while just 28% live with a significant other, according to Pew Research), we get front-row seats to the hottest products through our kids. If you think that’s not the same thing, consider this: GenX is super engaged with our kids. We’re the generation that started the whole helicopter parent trend, after all. While I’m not really a hoverer, I do take an active interest in my son’s interests. I know which anime shows are really hot right now with his age group and which ones just wish they were. I know which video games are making a comeback and which ones just aren’t that cool anymore. I even know which YouTube stars shut down their channels, started new ones, or at war with other YouTubers. I know because I listen to my kid, and I make it a point to keep up-to-date on the things he loves.

I think the biggest reason I’m still your target audience, though, is because age really has no meaning in today’s society. I may be 43, but in my mind I’m still in my 20s. My oldest aunt is nearing her 70th birthday, and she’s still one of the hippest ladies I know. My mom is in her 60s and still binge-watches Charmed & Buffy reruns with me.

Isn’t it time we all dispelled age myths? Whether you’re a 40-something punk rock girl, a 50-something YA writer, or even a 70-something hipster, you are a valuable member of society with opinions that matter. Don’t let anyone ever tell you that you’re not the “target audience!”

Want to see how others are disrupting the age myths? Head over to AARP’s Disrupt Aging page for inspiration!

How do YOU disrupt aging myths? Tell me about it below!