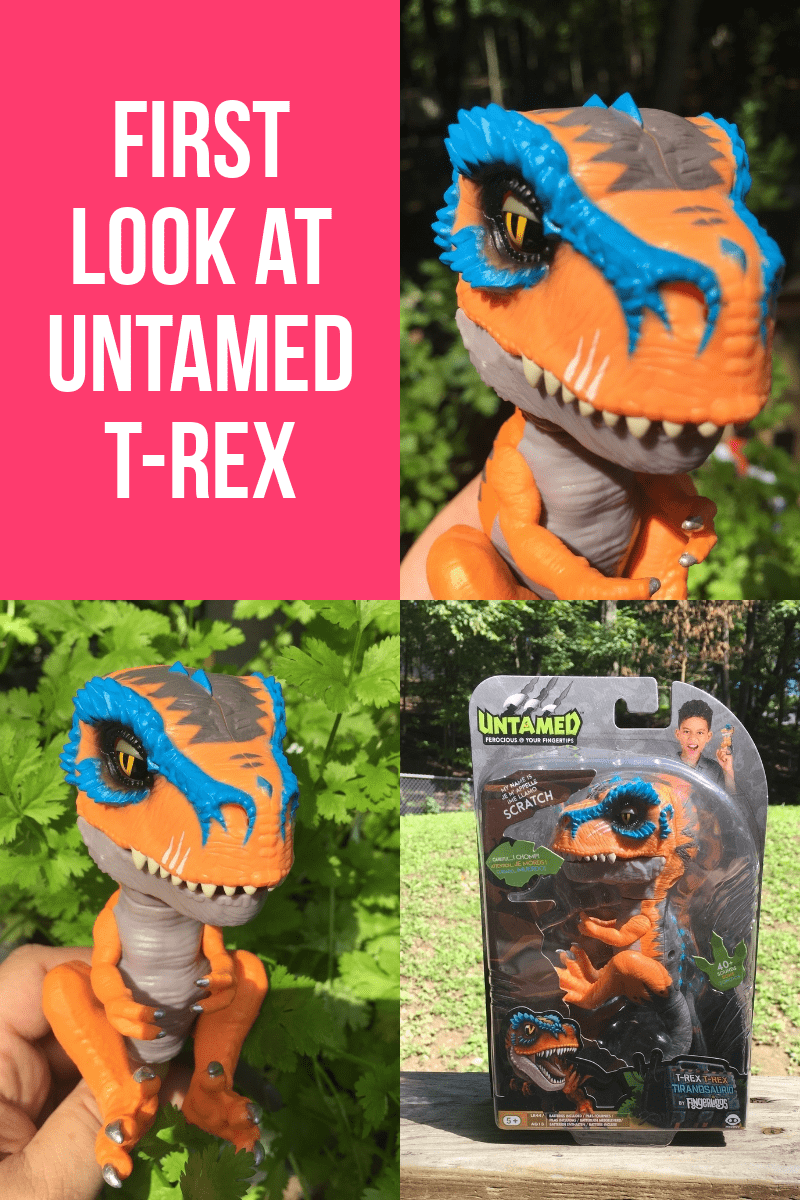 Get ready to tame the untamable! WowWee gave me a complementary first look at their brand new Dinosaur-themed Fingerling, Untamed T-Rex! Talk about Ferocious at Your Fingertips! The holidays may be a few months away, but I’m already starting to plan out what I’m getting for all the awesome little kiddos in my life. I love that I once again have the opportunity to buy toys. My son outgrew them a few years ago and I’ve been sadly wandering toy aisles during the gap years like a lost little puppy. Fortunately, I now have a niece, nephew, and my best friend’s daughter to buy for!

Fingerlings are on every child’s wish list, but I know which ones are going straight to the top of my nephew’s this year! Check out a first look at the brand new Untamed T-Rex and you’ll see why!

Untamed T-Rex joins The Raptors Untamed Fingerlings, which released just a few months ago, as the newest member of the dino-themed family. Like the Raptors, he’ll be available in four different styles for kids to collect. We are proud dino-tamers to Scratch…or we are until my brother comes up next week. Then he’ll be going home with my niece and nephew. Scratch, along with his brothers, features over 40 different sounds and responds to your voice and touch. From wild roars to sweet little “lovey” sounds, Scratch goes from Untamed to Tame with a flick or a flip.

I didn’t even realize he had so many features when I took my video, so I’m including some from WowWee as well. It’s kind of hard to activate all his awesome features while holding him on one hand and my camera in the other.

My video is the first one, while the WowWee videos showcase the Raptors.  Please ignore my ragged fingernails, I am a biter…much like T-Rex!

Untamed T-Rex responds to all sorts of other touches! For example, blow in his face to make him sneeze…

…or hang him upside by his tail to see him go bonkers!

Like all of the WowWee Fingerlings, the Untamed T-Rex is full of vivid detail that really helps bring him to life. His eyes are so expressive, aren’t they? Poor little guy, I was making him tired! One of the things that I really adore about the Fingerlings collection is how they encourage imaginations and really hone in on what kids love today. They’re techy enough to keep our 21st Century Digital kids engaged, yet low-tech enough to still encourage creative play. I took my T-Rex into the garden so he could explore the wild! Well, as wild as a container garden on my porch can get, anyway.

I secretly want to keep him for myself, but I know he’ll be happier with my niece and nephew. Besides, as they are fond of saying, “Aunt Nikki always has something for us when we visit,” so I don’t want to disappoint!

With the holidays getting ever closer, you may want to head out to your favorite Fingerlings retailer and grab Scratch and his pals now! Fingerlings sold out in an instant last year around here! Untamed T-Rex releases today in stores nationwide, including Walmart and GameStop. Each one retails for a reasonable $15.  Head over to WowWee’s Fingerlings Untamed website to check out all the features of Untamed T-Rex and find out where to buy.