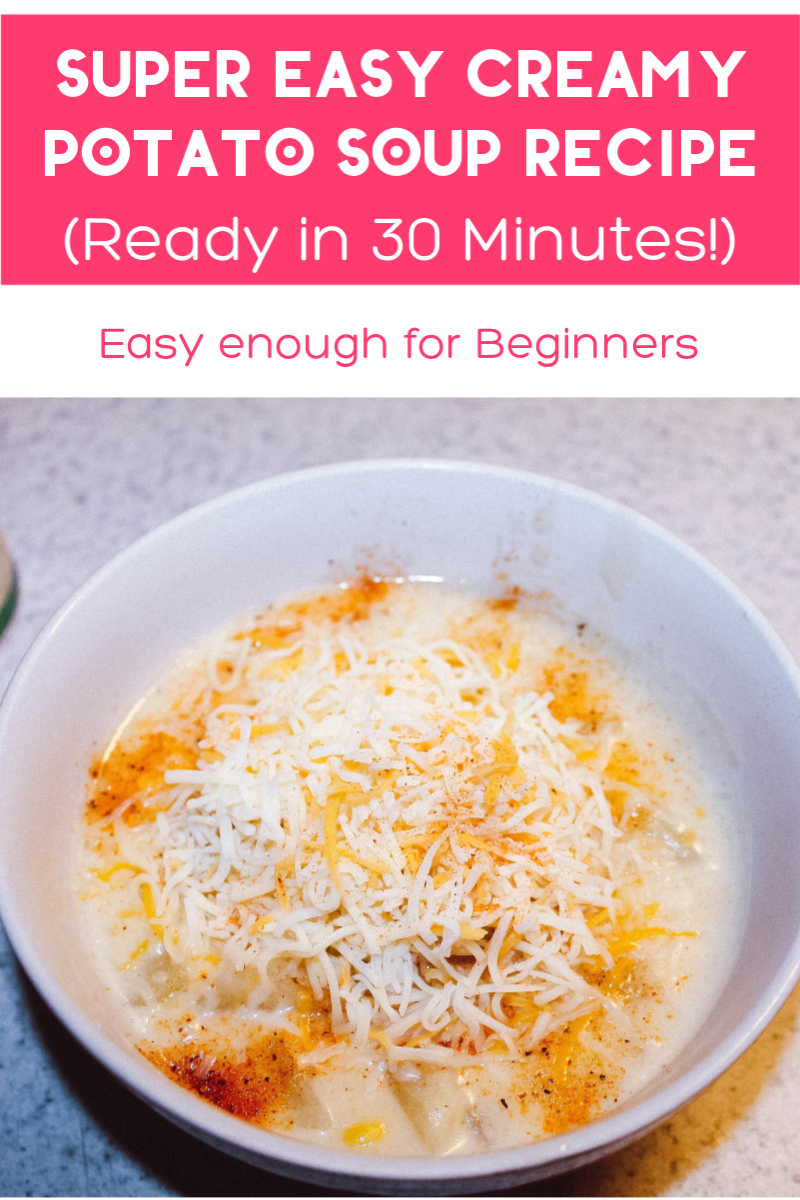 Looking for a potato soup recipe that doesn’t take all day to make and is easy enough for beginner cooks? I made this super creamy potato and corn chowder-style soup last week that you’ll just love! If you read my yummy ziti recipe, you may recall that I’m really trying to stretch my food money as far as possible so that we don’t blow our food budget within the first two weeks of the month. That means less convenience food and more cooking actual meals.

You may also recall the many, many times that I’ve said I’m no Master Chef! I am very new to following recipes and cooking things that require more than three ingredients. Up until about a month ago, I had about three recipes that I knew how to make, and the rest of our meals came entirely from a box in one form or another (be it a box of mac & cheese or a frozen dinner).

Now, I’m up to about ten recipes and counting! For those who’ve spent their entire lives whipping up gourmet meals, that may not sound like a big deal, but for a girl who spent her life avoiding cooking, it’s outstanding!

Back to the recipe: I really wanted to make potato soup. My son’s dad (I never know what to call him, since we’re not technically divorced, but not together) used to make this amazing potato & corn chowder-style soup for me, but I never got the recipe. So I went in search of something that sounded familiar.

I found a zillion potato soup recipes, but they were all missing some element of the one I had in mind. A few came close, but they were slow cooker recipes, and my day isn’t structured in a way that makes it easy for me to start dinner before noon.

Then I came across this recipe on Sugar Spun Run. It was extremely close to what I wanted and easy enough to adapt to my needs. Check it out, then use the printer-friendly version at the end of this post to save it for later!

*This post contains affiliate links. If you make a purchase through these links, I earn a small commission at no extra charge to you. The original recipe also called for 1 medium chopped onion. I didn’t have an onion on hand so I skipped it and it was fine.

How to make it:

I don’t really know how you determine how many servings something makes, but it was enough for three people to eat two bowls each one night, then a bowl each the next day, and we still had some left over. So ten?

That’s about it! This super easy potato soup recipe came out exactly how I wanted it to! I am really pleased, and I hope you will be, too!

Do you have any favorite recipes that are easy enough for beginners? Tell me all about them!