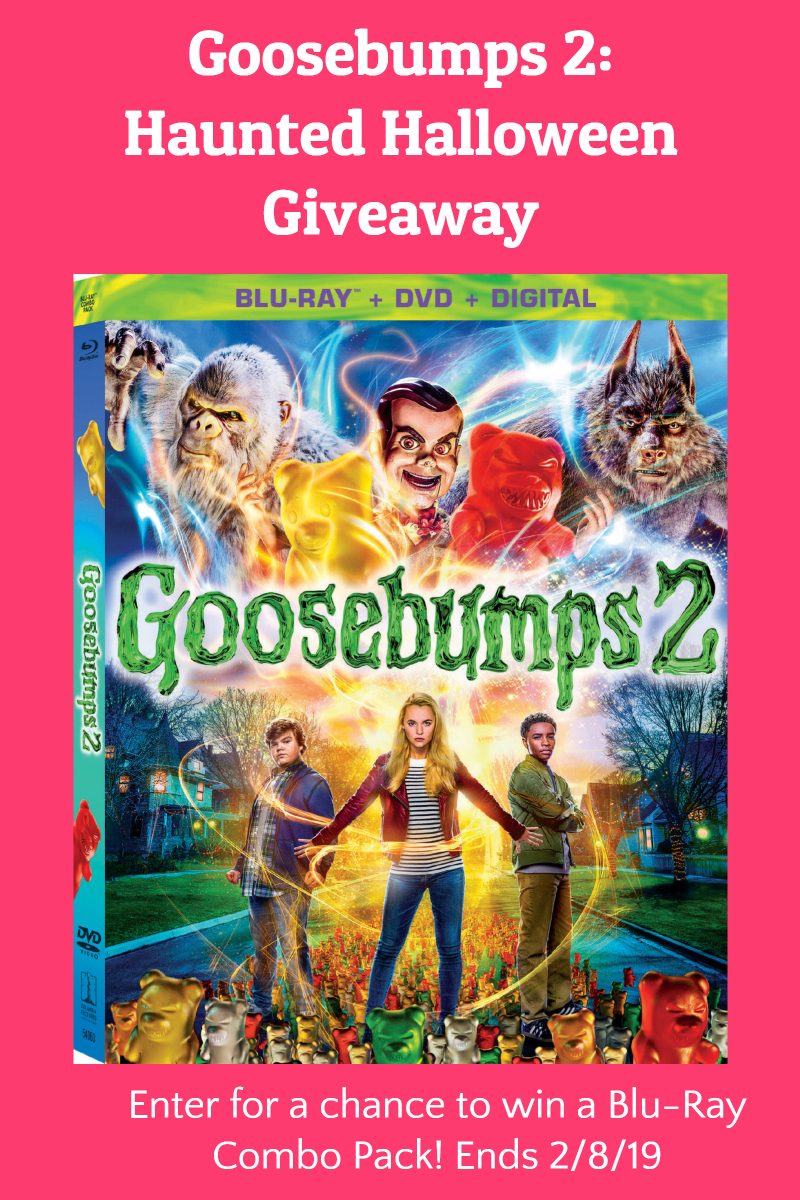 Head’s up, Stine fans: Goosebumps 2: Haunted Halloween is now available on all platforms! We received a review copy in the mail and sat down for a family movie night the other evening to watch it. Check out our thoughts, plus enter for a chance to win your own copy! What is Goosebumps 2: Haunted Halloween About?

Remember that creepy devious ventriloquist that we met in the first movie? Well, he’s back and running amok in this second installment of the family-friendly franchise based on R.L. Stine’s beloved book series. Fortunately for humanity, Sonny and his friends are ready and willing to stand up to the horrifying doll. Seriously, ventriloquist dummies are right up there with clowns in the “why would someone invent something so creepy?” department!

So, here’s the spoiler-free gist:

Sonny, played by Jeremy Ray Taylow, and his friend Sam (Caleel Harris) are two teens trying to make a buck doing junk removal. One day, they do a run at a crazy creepy house, where they happen upon Slappy. Unlike me (who would throw him in a bottomless pit), they decide to read the incantation in his pocket. Because, you know, that is always a good idea! They even bring Creepy McCreepington home with them. Again, always a good idea, especially after reading a weird incantation.

Can you see where this is going to lead? If you saw the first movie, you already know all about Slappy’s demented personality. Despite the fact that the little guy just plain gives me the heebie jeebies, I almost do feel bad for him. Deep down, he really just wants a family. Unfortunately, he seems to want to take over the world just a little bit more.

Our thoughts on Goosebumps 2: Haunted Halloween

This post contains affiliate links. If you make a purchase through these links, I earn a small commission at no extra charge to you.

Goosebumps 2 isn’t getting the stellar reviews that the first installment enjoyed, and I think that’s a bit unfair. No, it wasn’t as quite good as the first movie, but let’s be honest: sequels rarely are. Yes, the lack of Jack Black (say that ten times fast) is disappointing, but we know going into the movie that he’s not going to be in it, aside from a quickie cameo. It’s not really fair to judge a movie by who isn’t in it, even if that (wonderful) actor was a vital part to the first film.

So, when I sat down to watch Goosebumps 2, I decided to do two things.

Keeping those two things in mind, Goosebumps 2: Haunted Halloween was a really cute movie. The actors did a fantastic job bringing the characters to life, and there were plenty of funny moments to entertain kids of all ages. I particularly love the giant gummy bears, even if they did want to devour their devourers. Seems fair, right? I mean, we eat them, why shouldn’t they want to eat us?

While the first Goosebumps definitely felt like a movie for everyone (I absolutely loved it), this one does have a more “pre-tween to tween” feeling, and that’s totally fine. It’s still enjoyable for adults to watch on family movie night, as long as you remember that you are not the target audience. It has some very funny moments that younger kids will adore, and the “thrills” aren’t chilling enough to send your kids running to your room in the middle of the night. Overall, I enjoyed the movie enough to recommend it to friends with children.

The movie is rated PG for “scary creature action and images, some thematic elements, rude humor and language,” so make sure you watch it with your younger kids.

Bonus features are a big part of the reason we buy DVDs, Blu-Rays, etc,  versus just renting the movie itself, so let’s talk about those!

Goosebumps 2: Haunted Halloween is now available at all major retailers, including Amazon.

Enter below for a chance to win a Blu-Ray Combo Pack copy of Goosebumps 2: Haunted Halloween! Giveaway is open to US residents age 18+ and ends on February 8th. Good luck!