Your Awesome Friendly Kid Will Devour This New Diary of a Wimpy Kid Spin-Off! 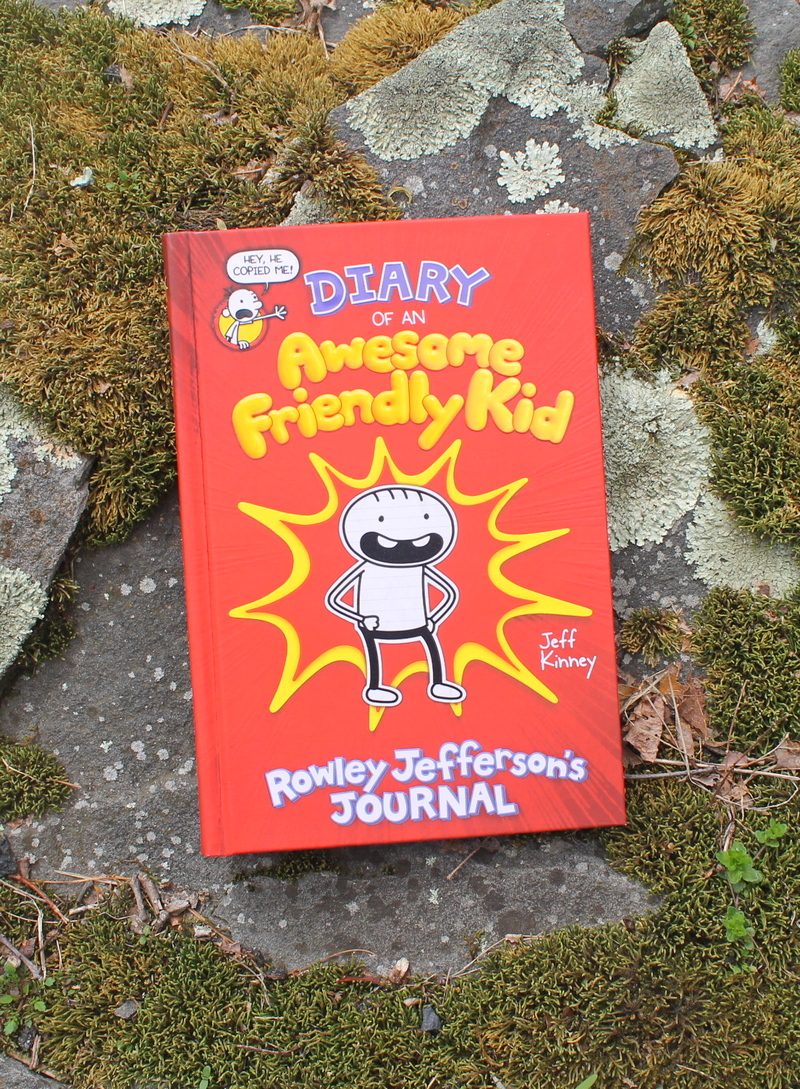 I’m excited to partner with Abrams Books to share the news about Diary of an Awesome Friendly Kid: Rowley Jefferson’s Journal! As always, all opinions are my own. If you’ve had a child in middle school any time in the last 15 years, there’s a very strong chance that you’ve heard of the Diary of a Wimpy Kid series by Jeff Kinney. My son has devoured every single book (13 in all so far) at least twice. I knew he’d be excited about the spin-off, Diary of an Awesome Friendly Kid: Rowley Jefferson’s Journal. Check out the book trailer, then read on for details about this positive and upbeat new book for tweens and young teens.

The spin-off of the incredibly popular bestselling Diary of a Wimpy Kid series is told by Rowley Jefferson, Greg’s best friend. For those who haven’t at least heard about the Wimpy Kid series from their kids, Grey Heffley is the main character, and the original series is written from his point of view. Like most best friends, Greg and Rowley have had their share of ups and downs throughout the series, but they always find their way back to each other.

Where Greg can be a bit mischievous (to say the least) at times, Rowley remains a constant positive, enthusiastic and kind character throughout the series, even when he and Greg are on the outs. Greg Heffley returns later this year in Diary of a Wimpy Kid #14. For now, that’s enough about him. Rowley deserves the spotlight today, especially since we’re talking about HIS diary! Get ready for a whole new look into Jeff Kinney’s Diary of a Wimpy Kid!

Introducing the newest Wimpy Kid author—Rowley Jefferson! Rowley’s best friend Greg Heffley has been chronicling his middle-school years in thirteen Diary of a Wimpy Kid journals . . . and counting. But it’s finally time for readers to hear directly from Rowley in a journal of his own. In Diary of an Awesome Friendly Kid, Rowley writes about his experiences and agrees to play the role of biographer for Greg along the way. (After all, one day Greg will be rich and famous, and everyone will want to know his life’s story.) But Rowley is a poor choice for the job, and his “biography” of Greg is a hilarious mess.

The style of the book will resonate with Wimpy Kid fans, as it has a very similar overall look. Okay, so basically it’s the same exact style. Hey, even Rowley will admit that he copied Greg! You know what they say, if it’s not broke… Kinney has a way of writing that completely engages kids of all ages (especially middle graders), so it makes sense that he’d stick with it! What makes Rowley so special?

Rowley is a rare gem of a kid who has managed to hold onto his childlike innocence even after 13 (and counting) adventures and misadventures with a BFF who’s sometimes more of an frenemy than a friend. His “diary” shows readers a whole different side of the characters that kids have come to know and love.

I read an interview with Kinney on NPR that really summed up the difference between Greg and Rowley. He said that where Greg is in a rush to grow up, Rowley just really loves being a kid. I love that about him because it seems like kids grow up way too fast these days. I remember very well how it felt to be 12 and want to be treated like a grownup, yet at the same time still wanting to play with my dolls. It also sends a fantastic message that you don’t always have to have a larger than life personality, and that it’s perfectly okay to just be an awesome friendly kid. Proud parent of my own “awesome friendly” kid!

Every single day, I thank my lucky stars that I got such an “awesome friendly” kid myself. Jacob is everything I ever dreamed of in a child and so much more. He’s so smart, funny, and compassionate. Even at 13, he still takes the time to tell me that he loves me at least once a day (and often many, many more times than that). At school and with his own friends, Jake would tell you that he’s probably more of a Greg, but at home and with his family, he’s all Rowley. He hasn’t always had it easy at school (he was bullied bad enough that I took him out and put him in cyber school). I think he developed a bit of a class clown Greg personality as a defense mechanism. At home with me, though, he can just relax and be who he is without worrying about anyone judging him, and who he is happens to be an exceptionally spectacular kid.

I think a lot of our kids have both Greg and Rowley traits, and Diary of an Awesome Friendly Kid gives them a chance to explore their Rowley side a bit more.

Connect with the series on social media Jeff Kinney is the #1 USA Today, New York Times, and Wall Street Journal bestselling author of the Diary of a Wimpy Kid series and a six-time Nickelodeon Kids’ Choice Award winner for Favorite Book. He has been named one of Time magazine’s 100 Most Influential People in the World. He is also the creator of Poptropica, which was named one of Time’s 50 Best Websites. He spent his childhood in the Washington, D.C., area and moved to New England in 1995. Jeff lives with his wife and two sons in Massachusetts, where they own a bookstore, An Unlikely Story.