What is a Postdrome (aka Migraine Hangover) & How Do You Deal With It? 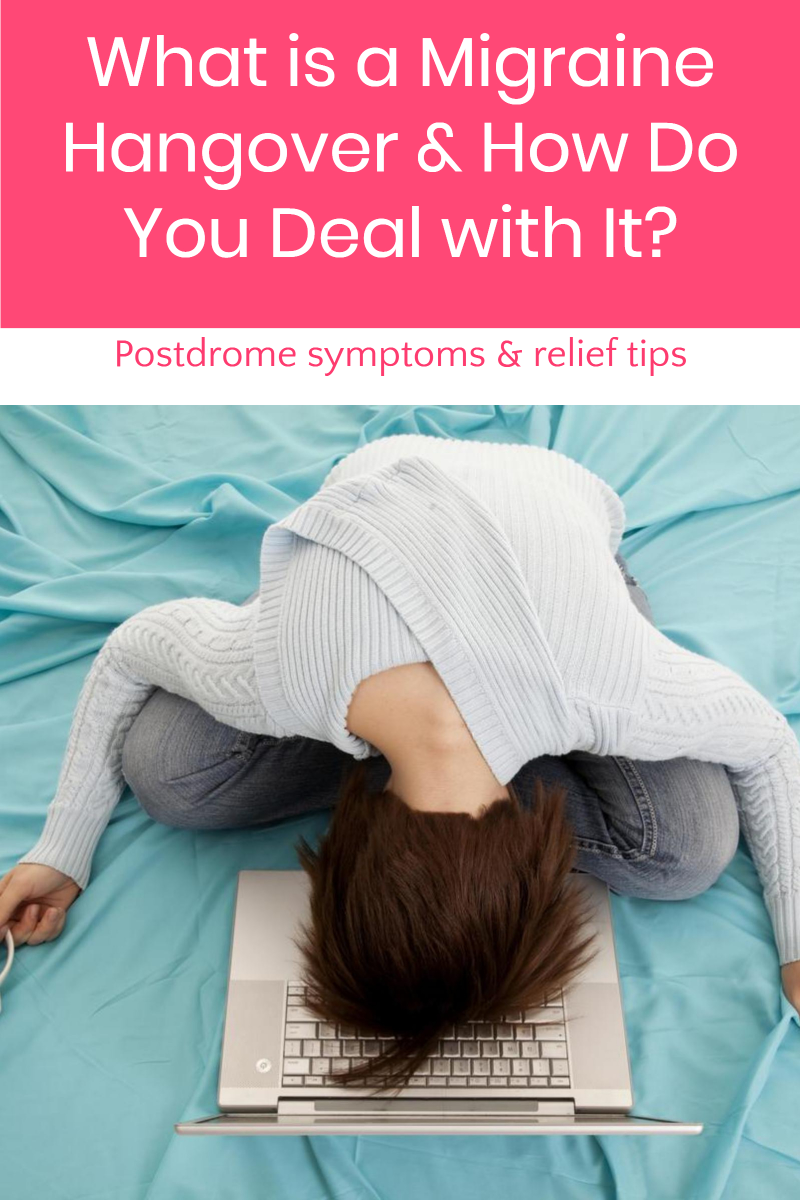 Have you ever heard of a postdrome? Maybe you’ve heard it called by its other name: a migraine hangover. While I’ve certainly experienced it more times than I can count, I never knew it had a name until I saw it in my migraine tracker app. Today, we’re going to talk all about the postdrome, along with how to deal with it. What is a Migraine Postdrome?

The TL;DR of it is this: a postdrome is that worn-out, wrung-out, and kind of strung-out feeling that you get after a horrific headache day. Basically, a migraine hangover. It’s the 4th potential stage of a migraine (following prodrome, aura, and the migraine itself).

Not everyone experiences it, but it’s one of those things that if you do deal with it, you know exactly what I’m talking about. Let’s talk a bit about postdrome symptoms, then we’ll get into some tips for dealing with a migraine hangover.

The clinical postdrome definition doesn’t differ much from my version of it. A postdrome in general is a set of symptoms that linger on after the actual condition has passed. While it can technically apply to any illness (a cold, for example), it’s most commonly used to describe the symptoms that follow a migraine. Which brings us to… Migraine hangover symptoms vary about as much as the symptoms of a migraine itself, but may include:

The most common migraine hangover symptom, my postdrome fatigue can range from “I feel a little tired” to “I’m just going to sleep for the next week, so please do not disturb.”

I don’t know about you, but I can’t concentrate for squat after my migraine finally passes. Even ordinary tasks like loading up Netflix feel like monumental challenges. To put it quite bluntly, I feel dumb. I swear, my IQ plummets for hours up to days following a migraine. It really stinks because a migraine robs me of a day of work to begin with, then the postdrome comes along and makes it hard to get caught up!

Postdrome depression is common, as is anxiety. If you think about it, it makes sense. Migraines take a lot out of you and leave you feeling like you’ve spent the duration fighting a beast you know you can’t beat. A beast that will return again at some point. When you finally do get it to relent, you’re on edge because you know you haven’t seen the last of it.

Even if you don’t experience postdrome anxiety or depression, it’s not uncommon to feel a little unsteady in the mood department. I’m not talking “psychotic break” or anything, just unsteady.

Just plain feeling “out of it”

Some of my migraines are so bad that nothing I throw at them helps, and trust me, I throw a lot at them. Considering the sheer amount of medications that I take trying to get rid of them, it’s no wonder I feel totally out of it once they pass. I had one so bad a few weeks ago that I spent hours screaming on my bathroom floor while my mother looked up drug interactions to see what I could try next.

How long does migraine postdrome last

Like the symptoms, your migraine postdrome duration can vary depending on the severity of your headache, what you took to get rid of it, and just on you in general.

I tend to have three types of migraines, and the postdrome differs for each one.

So in answer to the question of how long a postdrome lasts- anywhere from minutes to days! Vague, right? Here’s a more scientific-based answer: according to this study, 93% of people feel like their “normal” selves within about 24 hours.

While my experiences say differently, the same study says that there’s no correlation between the medication taken or the severity of the migraine and the duration of the postdrome. So you could theoretically have a head-chopper migraine and no postdrome, or a “hey, that’s not so bad” one and feel like crap the whole day after.

How to get rid of a migraine postdrome

As far as postdrome treatment goes, there isn’t a whole lot you can do once it starts except ride it out. The only thing that helps me is rest and “zoning out” on the couch watching something completely mindless on Netflix. Some things to try include:

As far as medications go, you’ll need to talk to your doctor about that. Some doctors do recommend an OTC pain reliever, but if you’ve already loaded up on them, they can actually cause a rebound headache. Since your doc knows what you’re taking already, she can help you decide if additional meds are a good idea in the postdrome phase.

Most doctors recommend managing your migraines to help manage your postdrome. Staying hydrated is probably the most important thing you can do. It’s hard when you can’t keep anything down, though.

I take ondansetron to help with the nausea and vomiting, so talk to your doctor about that. Sometimes I’m too late and have a hard time keeping even that down. I used to have the type that dissolves under my tongue, but my insurance stopped covering it, so now I can only take the tablet and hope I can keep it down long enough to do its job.

A postdrome is like adding an insult to injury. It stinks that we get stuck with a migraine hangover after dealing with a horrendous headache. While there may not be a whole lot you can do, at least you can get some comfort from knowing it’s not just you. I know, very small comfort, but hey, it’s something!

Do you get migraine hangovers? How long do they last for you? What do you do to relive them?