What On Earth Are Super Lice? (Plus How to Get Rid of Them Without Toxic Chemicals) 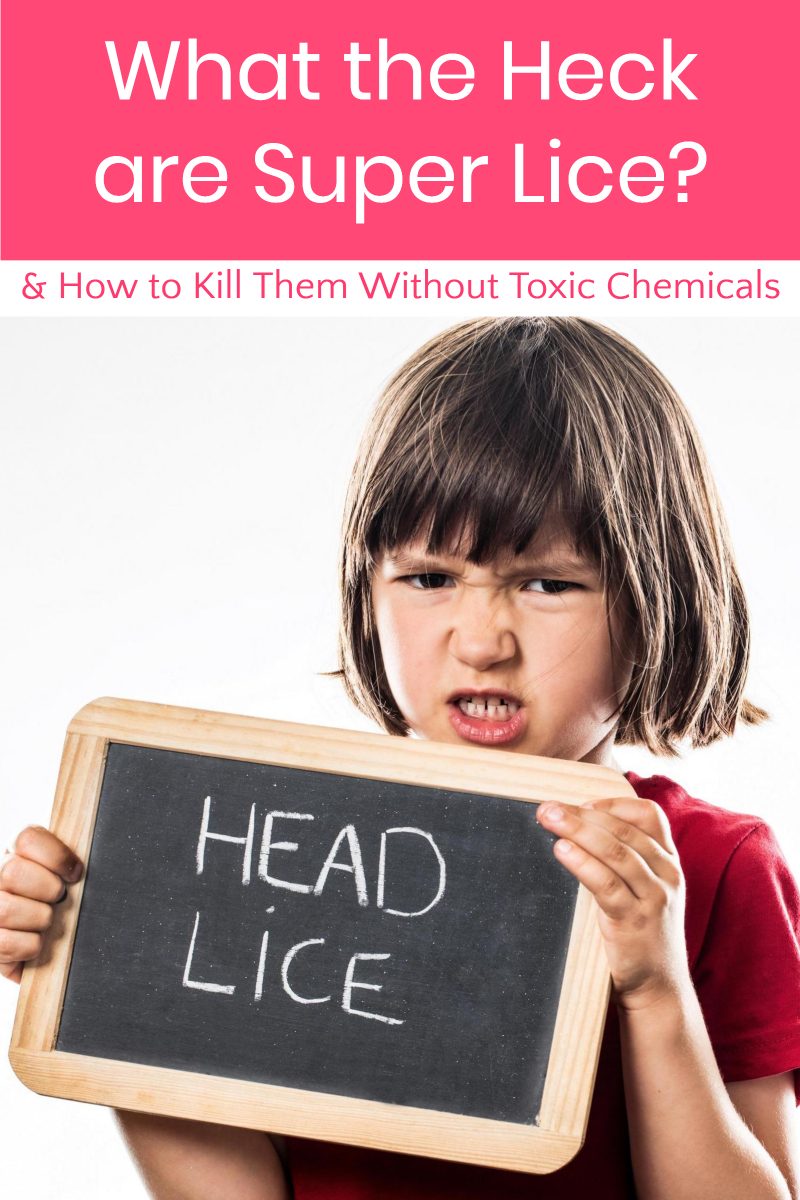 As if plain old icky garden-variety lice wasn’t bad enough, nature had to go and invent super lice. Actually, nature had a lot less to do with it than we did. Thanks to decades of treating lice with pesticides, the little buggers have grown incredibly resistant. Don’t worry, though, you can still zap these creepy crawlers (literally) with a non-toxic treatment that won’t contribute to their pesticide-resistance. Because, honestly, the last thing we need is super super lice! Just in time for summer camp season, I partnered with LiceGuard to share must-know information about these nasty critters and tips on how to get rid of them without loading your child’s scalp up with harsh chemicals. All opinions (and horror stories) are my own.

What the heck are super lice?

Before we talk about super lice, I have to share a quick story with you that illustrates why I’m so terrified of these creepy crawlers.

The year was 1980-something and I was eight. My little brother went off to a summer day camp to have the time of his life playing with other tiny tots his age. He returned with bleach-blonde hair, a suntan, and a head full of lice.

Getting rid of the bugs on him was simple. I think my mom just shaved his little head. Me? Not so much. I have super thick hair, and back then it was also pretty long. Do you know how long it took for my mom to comb through that head of hair with a metal comb? Six hours. Six long hours of me sitting in a chair bawling because the comb snagged and pulled and pinched. That was after she doused my head in pesticides that burned my scalp (and eyes and ears and nose).

So yes, when I hear the word lice, my heart rate speeds up and abject terror sets in. Super lice? Full-blown panic attack. I’ve always sworn that if I ever got lice again, I’d just shave my head and buy a wig.

Thankfully, lice treatment has come a very long way since the 80s, so I probably wouldn’t have to follow through on that threat.

Let’s find out how one gets lice in the first place, how super lice came to be, then we’ll learn what we can do about them without dousing our kids with pesticides.

How does lice spread?

I feel like we should talk about how one gets lice before anything else, because there are a lot of misconceptions. Lice isn’t a sign of a dirty house, dirty hair, or a dirty kid, so get that out of your mind right now.

You could be the cleanest person in the world and wash your hair ten times a day (don’t do that, you’ll destroy it) and STILL get lice. My brother wasn’t a dirty kid. Our house was clean. He still brought it home.

Lice thrives by sucking blood from their victims, but it can hang out on clothing and in bedding, on your couch cushion, your carpet, your bathroom towels, your child’s favorite teddy bear for a fairly long time before it needs its next meal.

One upside: they’re not jumpers. They crawl from head to fabric to head, but if you’re just standing in the vicinity of someone with lice, it’s not like they’re going to jump ship for your head.

Where did super lice come from?

Where did it come from? You. Well, you, me, the guy down the street, and pretty much everyone else that used pesticides to treat lice over the last few decades. It’s amazing, really, because lice infestations date back all the way to Ancient Egypt, yet super lice are an invention of modern humanity and our tendency to overdo everything.

As LiceGuard explains on their blog, super lice are basically lice that fought back. You know how years of overusing antibiotics led to the creation of things like MRSA, VRE, and C. auris? Well, overuse of pesticides to treat lice forced them to evolve, too. They had to learn to fight back, and they basically became the underweight champions of the gross bug world. We’ve created lice that’s adapted to the point that traditional treatments rarely work.

It only took five years for Super Lice to spread to 48 of the 50 states. Overall, about 75% are classified as Super Lice. In some of those states, though, 100% of all lice tested were super-strength pesticide-resistant bugs.

So, what are our options? Well, we can all move to Alaska or West Virginia (the two states without super lice so far), or we can use pesticide-free options to get rid of them. I opt for the second because as much as I’d love to live in Alaska, I can’t afford to move!

If your whole scalp is tingling right now with creepy crawly feelings, don’t worry: there is some good news. First, lice aren’t particularly dangerous. Gross, yes. Insanely itch-inducing? Absolutely. However, they’re not likely to lead to serious health conditions. Now, the pesticides that we use to kill them on the other hand…

Obviously, it doesn’t matter if they’re plague carriers or completely harmless. We don’t want them on our heads. Period. Traditional lice treatments are both ineffective and potentially dangerous, so let’s check out some non-toxic ways to get rid of them.

The Robicomb from LiceGuard is one of the best (if not THE best) non-toxic lice treatment because it relies on electricity to zap lice (but not your kid’s head, don’t worry) rather than chemicals.

The coated comb, which runs on a single AA battery, detects lice and kills them on contact. It’s reusable, so you can clean it and use it on everyone in your family.

At under $25, it’s also a cost-effective lice treatment, since you don’t have to buy (and re-buy) multiple bottles of anything. Watch the video below to see it in action:

Although you don’t need special shampoo to kill lice before using the RobiComb, if you want to toss in another line of defense, make sure you stick with a non-toxic shampoo. LiceGuard Lice & Egg Shampoo is a good option because it’s free of parabens and harsh chemicals. It works by breaking down the bonds that help eggs and nit stick to hair. This makes it even easier to comb out your child’s hair.

One you get rid of the lice on your head, you need to kill it around your home. Otherwise, remaining nits will just hop on and start the infestation all over again.

Launder Lice is an all-natural detergent additive (basically, you use it along with your regular detergent) that’s made with essential oils and patent-pending technology to kill the bugs on your bedding, clothes, hats, and so on.

Are there other natural remedies to treat lice? Sure. You could try the “smother them” method with coconut or olive oil. You could even try the essential oil method with tea tree, peppermint, and other oils. However, the verdict is out on whether any of these options work well.

Besides, I’m not too keen on dousing my child’s hair with essential oils. Contrary to the plethora of misinformation on the internet now that everyone and their dogs are “experts” on essential oils, not all of them are safe for kids, and only about three of them can be applied directly to the scalp without risking serious skin irritation.

So yes, there are other natural remedies, but I’d rather just go with a non-toxic option that has a reputation for working well, and LiceGuard has that good reputation. I’m way too scared of lice to trust anything that isn’t completely proven!

Visit the LiceGuard website to learn more about their products and find out where to buy them. Hint: most of them are sold in Walmart, CVS, and other major retailers.