5 Classic Japanese Snacks You Need to Try in Winter

Japan is a country with four seasons, with spring and autumn having some of the highest visitor rates because of the excellent weather. The country’s summer months can be sweltering; winter, gelid. Like any forward-thinking nation, Japan has come up with ways to adapt to extreme temperatures, and some of the best ways are through food.

Seasonal food and snacks are a big hit in Japan with food companies shelling out limited-edition flavors in the competitive market. Most people already know of popular summer snacks because they tend to be available year-round for import and export. Winter treats, however, are not as sought out.

In the winter, Japan has a lot of winter-solstice celebrations, snow festivals, and other things that people look forward to. Hearty and warming food is at the top of the list, but what of the snacks for when you get a case of the munchies? Here are some famous wintertime snacks you need to get your hands on.

Yakiimo, as they are called in Japan, are a beloved wintertime snack food. In the past, they were mostly sold by mobile food trucks and independent street vendors. This street tradition still lives on today, although not as widely practiced as it was in the past. Modern kitchens are evolving and now have the means to make yakiimo at home.

These sweet potatoes have purple skin, and when baked, they turn bright yellow. They are purported to have a sweet taste that you can eat a baked sweet potato on its own. It is a tasty snack that you can enjoy while it warms your hands.

Nikuman, or steamed hot bun, are a popular winter treat. It is a fluffy white bun filled with ground pork, cabbage, ginger, and mushrooms, among other ingredients. While you can certainly make this at home, it can be quite a process. Nikuman is considered a street food, but you can also regularly see it sold in convenience stores, where it’s kept piping hot and fresh.

Azuki, or English red mung bean, is touted for its many health benefits and is a mainstay in Japan’s cuisine. There are many ways azuki is used, but for this winter dessert, the beans are either crushed or ground into a paste to make the soup. It is a traditional treat often paired with mochi balls and served at teahouses, confectionery shops, or at home.

The warm bean porridge is a beloved snack among the Japanese. If you ever find yourself hankering for something warm and sweet in the cold weather while visiting Japan, this is a perfect snack. It is best paired with hot green tea. 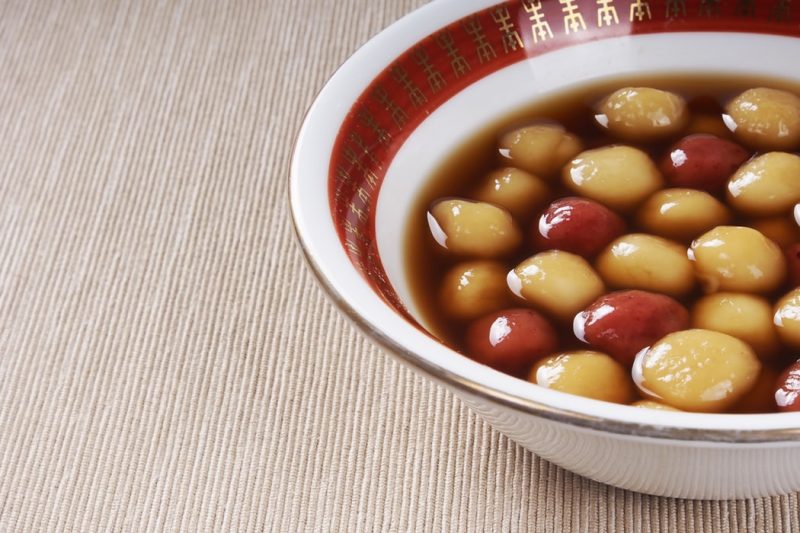 Rice cakes in Japan are eaten the whole year round, but there are certain variations of them that are perfect for the winter. An example is yakimochi, a style in which the rice cake is either grilled or broiled. The starchy food served hot or warm is filling and tastes great with other hot beverages, such as tea or sake.

Meltykiss is a chocolate snack that came out in 1992 and produced by Meiji. It is considered a seasonal treat because it is only sold during the winter. Meltykiss is called such because eating one is likened to eating snow, which melts quickly in your mouth. Storing and selling them during any other season would have been problematic because of that feature.

The easily melting chocolates are portioned in cubes with a rich dark-chocolate center and dusted with cocoa powder. They come in a variety of flavors, such as chocolate, green tea, and strawberry. There are other seasonal flavors as well.

Look Out for Other Stuff

Japan is a land of constant innovation, and its love for seasons ensures that there’s always something new to try. When you visit in the winter, make sure to get these tasty treats and complete your Japan experience.

What are your favorite winter snacks? Share your answers in the comments below.