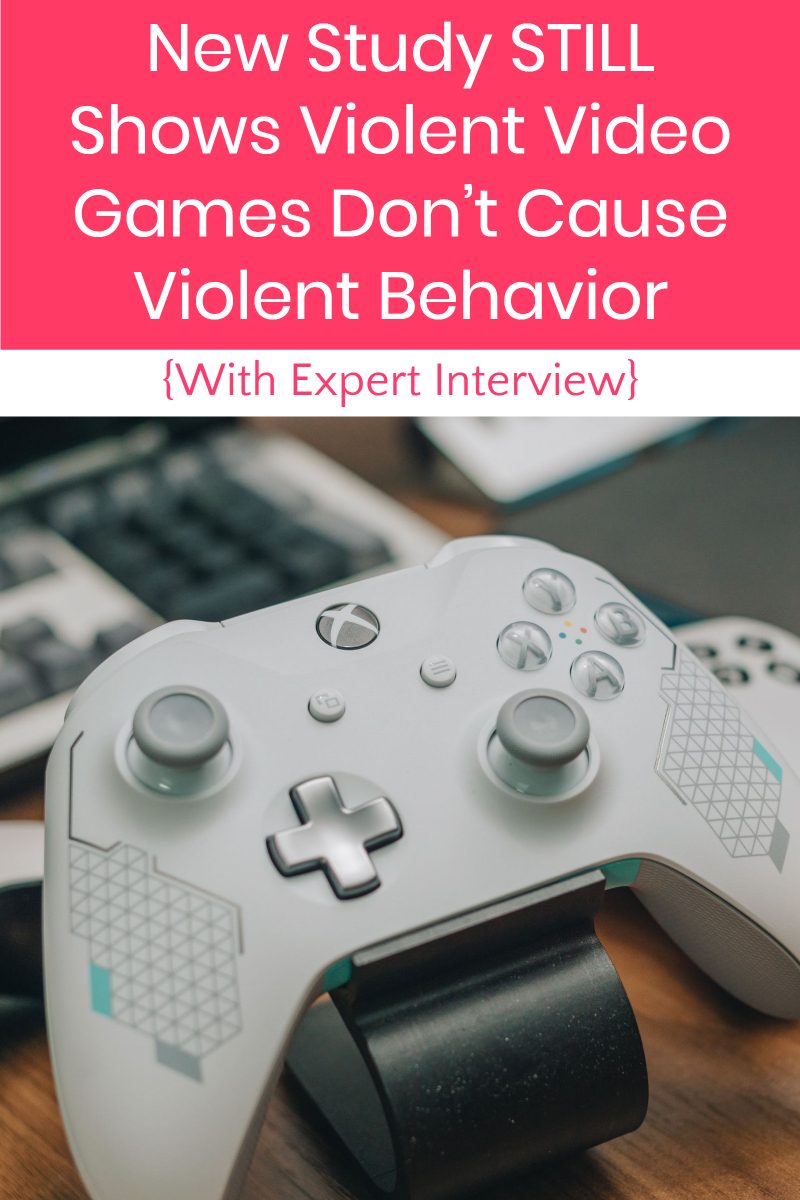 Once again, research proves what we moms of gamers already knew: violent video games DO NOT make for violent kids. In other words, playing games like COD, Borderlands, or CS:GO won’t turn your teens into raging psychopaths. Period. Read on for the details about this latest study and find out what it all means from the author, Dr. Chris Ferguson, himself.

If you’re interested in reading the full results (as well as the methodology and other scientific info) of the study, check out A Preregistered Longitudinal Analysis of Aggressive Video Games and Aggressive Behavior in Chinese Youth. Not really up on your study-ese? Let me break it down for you a bit (Dr. Ferguson will do an even better job of explaining it below, though).

Basically, the study followed 1,340 Chinese youth (45.1% of them male) with an average age of just under 15 (14.86, to be exact) over the course of one year and looked at how AVGs (aggressive video games) affected their aggression levels. The results were in line with what I (along with every gamer and parent of one) already knew: simply playing aggressive games does not lead to real-world aggressive behavior.

Don’t take my word and interpretation of the results for it, though. Dr. Chris Ferguson explains it much better than I can, so check out that interview below.

Need more proof that video games don’t cause violence? Check out the results of another study performed at Oxford University!

Dr. Chris Ferguson, Ph.D, is a leading expert on the effects of media violence (especially video games) and the author of the study. He’s also a Professor of Psychology at Stetson University, and author of multiple books (including a historical mystery novel called Suicide Kings, check them out at the end of this post). He’s also published over 100 scientific articles, given testimony before the School Safety Commission, participated in Biden’s video games talks after Sandy Hook, and participated in the CDC’s hearings on gun violence. So yes, he’s definitely an expert!

In case it’s not obvious, my questions are in bold. 😀

Can you briefly tell my readers a little about you and your background?

I’m a licensed clinical psychologist and professor of psychology at Stetson University.  My research has focused mainly on the impact of media on consumer’s attitudes and behaviors.  I’m a fellow of the American Psychological Association.  Last summer I gave testimony on the effects of violent media before the School Safety Commission headed by Nancy Devos.

What prompted you to study the effects of violent video games on youth?

I initially was interested in forensic psychology, serial killers, mass murderers, etc.  Pretty typical psychology student in that regards.  I was doing research with inmates at a nearby jail and still taking graduate classes.  In one criminal justice class, I heard a speaker referring to a report by a couple scholars claiming that the effects of media violence on aggression were similar in magnitude to smoking and lung cancer.  That seemed like a fairly lofty claim and it got me interested in what the data might actually say.

Why did you choose Chinese youth specifically for your study? Can the results easily be applied to teens in all parts of the world?

I think it’s important to get data from a lot of different cultures.  If we see similarities or differences, that can help us understand whether the trends are consistent cross-culturally or differ between cultures.  Our lab has done similar studies with youth in the US, UK and Singapore.  Other studies have examined European samples as well.  Fortunately, we seem pretty much the same results cross-culturally, so it’s nothing specific to Chinese youth.

What types of games were used in the study? Were they first-person shooters, for example? Role playing games? Online or offline games?

This study was a longitudinal survey study, meaning kids reported which games they spent most of their time playing at each time point.  For each game, we obtained the ESRB ratings, which provide a good estimate of the violent content in the game.  This, of course, involved a variety of games from different genres.

Why do you think video games take so much heat for being the cause behind violent behaviors in teens?

A lot of it is generational.  We actually find this across different groups.  Whether we look at the general public, clinicians or even scholars who study video games, age (or more precisely, experience playing games) is one of the best predictors of negative attitudes toward video games.  Interestingly, the other thing we find is that people who have negative attitudes toward kids also tend to have negative attitudes toward games.  So, the whole issue seems woven into inter-generational conflict.  Add the politics of distracting the public from talking about other issues such as gun control, and games are an easy scapegoat for primarily older adults to blame for perceived social problems.

In your expert opinion and based on the results of the study, do you feel that violent video games desensitize teens to real-world violence?

The evidence we have at present does not find that violent games contribute to desensitization to real-world violence.  In this study, we looked at things like prosocial behavior specifically and didn’t find that playing more aggressive games reduced prosocial tendencies.  It appears that, quite fundamentally, fictional media has relatively little impact on our attitudes and behaviors.

One of the biggest complaints I see about video games is that it causes teens to have difficulties distinguishing reality from fiction. Do you feel that this theory is supported by any significant evidence?

No, not at all.  Evidence from studies of kids suggest that kids actually start working on reality testing beginning by age 3.  By age 12, preteens can tell reality from fiction about as well as a typical adult.  So for a teen to be unable to distinguish reality from fiction, they’d have to be experiencing a significant psychosis or intellectual disability.

I also commonly hear parents claim that violent games make teens less empathetic and kind towards others. What are your thoughts on that?

Well again, that’s something we looked at specifically.  The evidence doesn’t suggest that playing aggressive games results in any decreased helping or empathy in real life.

What would you say to parents who dig up articles and studies that say video games do in fact cause real-world violence? In other words, what makes your study (along with the Oxford and other similar studies) more reliable than those contrary studies?

Psychology, as a whole, has been going through a replication crisis in many areas.  A lot of things we once thought were true are turning up to be false when tested under more rigorous conditions.  Part of the problem was something called “methodological flexibility” meaning researchers could analyze their data multiple ways and only report the variation on the results that best fit their hypotheses.  That seems to have happened in the video game violence field…meaning a lot of the studies are simply rubbish, having been manipulated by the scholars.  This can be fixed, at least in part, by using standardized measures and preregistering the analyses.  That’s exactly what I did with the current study.  Preregistered studies are generally more trustworthy than those that are not.

On the flip side of that, what would you say to parents (like me) who take a lot of flack for allowing their teens to play what some would perceive as “violent” video games? In other words, how can we eloquently use your study to respond to our critics in a way that essentially shuts down their criticism (and, let’s be blunt here, shuts them up!).

What is right for one family isn’t necessarily right for another family.  Games, including aggressive games, are often a great source of stress reduction and socialization for teens. Given little evidence such games are harmful, it’s perfectly reasonable for parents to make a decision to include aggressive games in their kids’ repertoire if they feel it works well for their family.  Given lack of evidence they cause harm, it’s really an individual parent’s choice.  And, frankly, no business at all of other parents!

If you’d like to check out Dr. Ferguson’s books, take a look below to find them on Amazon. Some of them are textbooks, in case you’re wondering. Also, Dr. Ferguson didn’t ask me to promote his books or anything. He didn’t even mention that they existed. I found them when I was researching him and thought they looked very interesting. 🙂 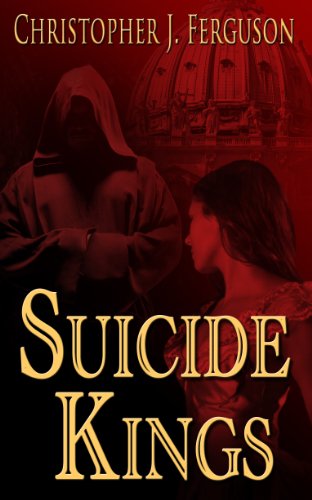 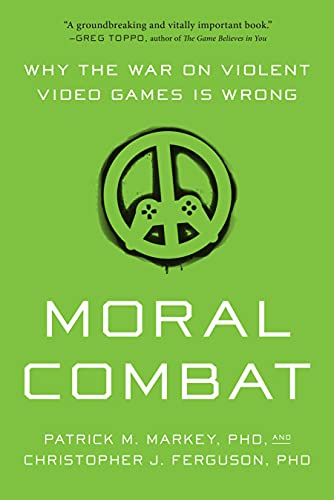 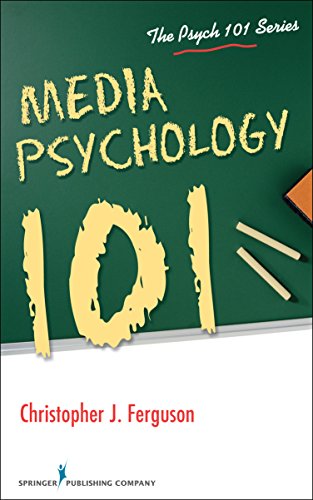 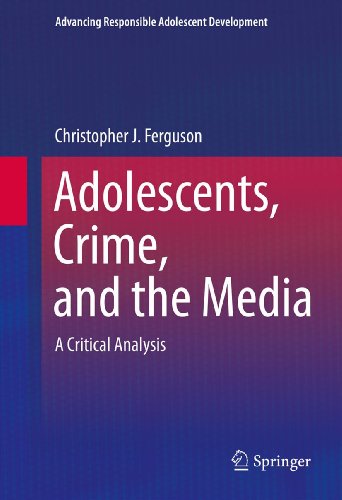 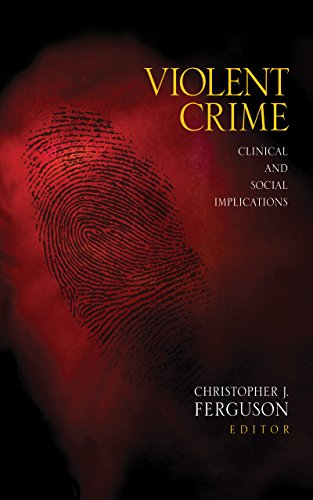