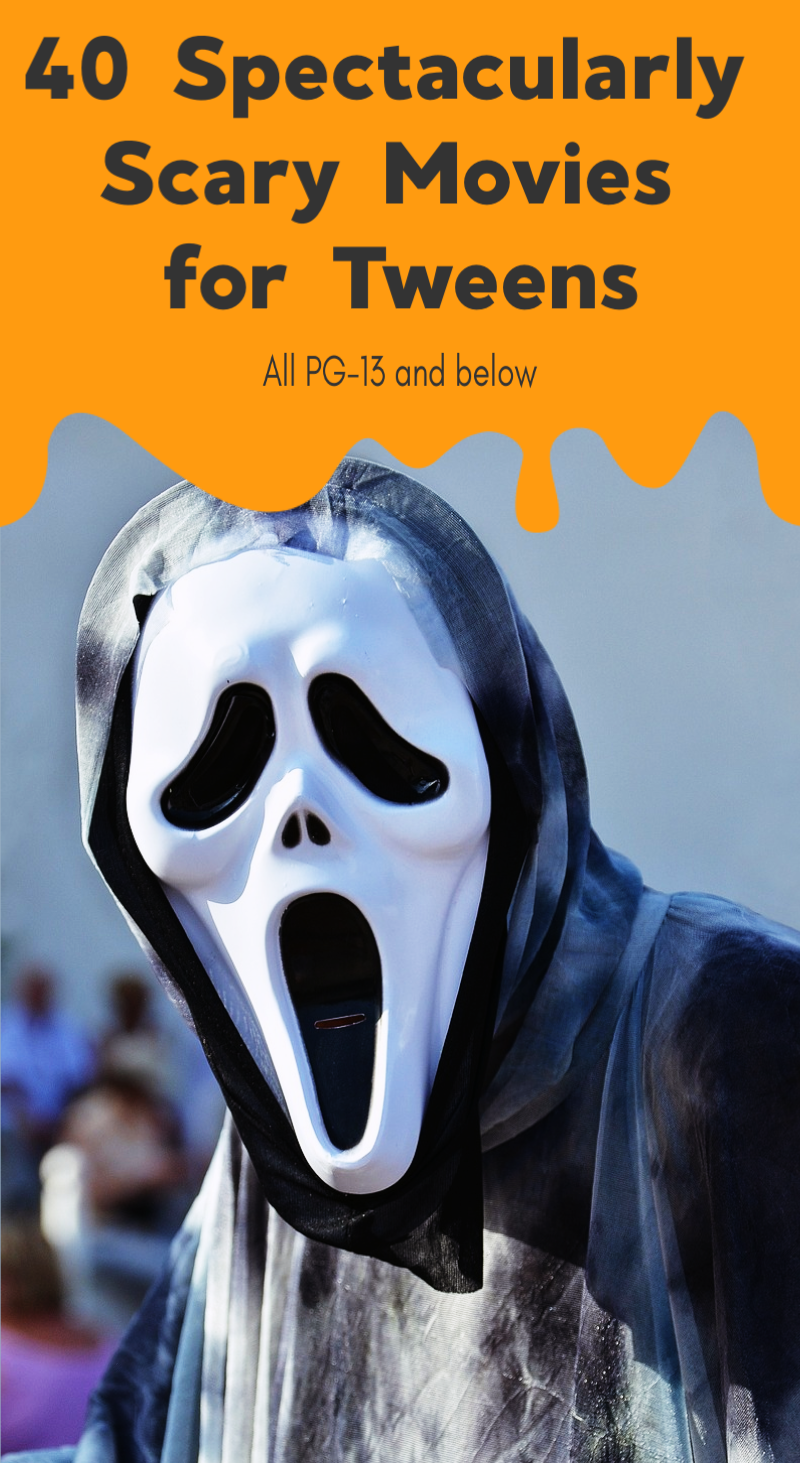 Planning on staying in with your tween this Halloween? Make it a fun family movie night with these 40 scary movies rated PG-13 and under! A couple of weeks ago, I told you all about how Jake is done trick or treating, and how depressed I am about it. I also shared some fun alternatives to trick or treating to try out. Among them was a horror movie marathon. After much deliberation, we decided to go with that option. Jake doesn’t really want to go anywhere or have people over because apparently some special loot for one of his games comes out only on Halloween and he doesn’t want to miss his chance to get it “like I did last year, mom.”

That last little bit was thrown in to remind me that I was the one who begged and pleaded with him to give me one last year of candy begging and that giving him was a HUGE sacrifice for him. Because getting a huge bag of candy is SUCH a big sacrifice.

Up until this year, Jake has hated horror movies. That’s my fault, really. When he was 3, he loved monsters and scary stuff. I took him into a local costume shop (Frazettas, run by the family of the famous fantasy artist, Frank Frazetta). I forgot how realistic their stuff was and thought he’d be fine. That totally blew up in my face and since then he’s avoided scary things.

Now that he’s 12, though, he’s decided that he’s old enough to watch horror movies and be fine with them. I am not convinced, which is why I’m starting off this list with “barely scary” movies. If your tween is just starting to get into horror movies, that’s a good place to start. The movies at the bottom of the list, while still PG-13, are definitely not for the feint of heart.

Need some ideas for a horror movie marathon that's appropriate for tweens and young teens? Check out these 40 magnificently scary movies rated PG-13 and below! Click to Tweet

40 Scary Movies to Watch with Tweens on Halloween

These 10 movies aren’t really what I’d call scary, but they’re fun Halloween flicks to watch together! They’re just right for tweens who like a little spookiness without all the jump scenes and gore.

Of the “barely scary” movies, Goosebumps and Scooby-Doo are probably my favorites. Both Jake and I are HUGE Scooby fans and we own nearly every movie, series, and special ever put out featuring Scooby and the gang. The Witches, Beetlejuice, and Monster Squad are high on my must-watch list for nostalgic reasons.

Moving on to “sort of scary,” these movies are easy enough to use logic to overcome nightmares. For example, if Jaws really freaks you out, just don’t go in the water! Likewise, if the idea of murderous gremlins gives you nightmares, just follow the rules and don’t feed your Mogwai after midnight! See what I mean? You can easily talk yourself (and your tween) out of being scared.

If you ask my son, Coraline belongs down under “nightmare-inducing” movies. I thought he’d love that one since he’s such a huge Nightmare Before Christmas fan. Turns out it’s a lot scarier than you’d think. Invasion of the Body Snatchers was the first scary movie that I remember seeing as a kid and it gave me nightmares for months. However, as a tween and teen, I realized that it’s really not all that terrifying. My mom insists that Gremlins is a children’s movie and not in the least bit scary, but I still think it belongs on the list.

Getting closer to nightmare inducing

For slightly more advanced tween horror movie buffs, these movies are definitely creepy enough to hold their attention without making them want to sleep on your floor for the next month.

Of these 10, The Watcher in the Woods scared me the most as a teen. That is by far the creepiest Disney movie ever made. We watched it in the auditorium at my middle school, which gives you an idea of how old it is, lol.

I read that they’re making a reboot of it, releasing on October 21st on Lifetime. I’m anxious to see if they managed to capture the eerie feeling that was prevalent throughout the 1980 version.

These last ten movies are pretty much as scary as you can get and still stay within the PG-13 and under range. Keep in mind that just because a movie is “tame” enough to slide in under the “R” rating doesn’t mean it’s appropriate for all tweens. Only you know what your tween can handle. I’m pretty okay with Jake watching movies with “language” warnings because Jake is pretty good about following my “cursing rules.” I’m more concerned with nudity than anything at this point. That said, I know he’s not ready for any of the movies on this section of the list (except maybe the original It, which he watched without telling me and didn’t find scary, but he doesn’t share my fear of clowns) because he hasn’t really build up much of a horror movie tolerance yet.

I watched It when it first aired on TV and I still have nightmares, so that one is a definite “no” for me! Rose Red, also a TV miniseries, was another one that gave me nightmares for weeks. In fact, after the first night, I woke up screaming for the first time in many, many years.

Do you have any favorite scary movies that are PG-13 and below?