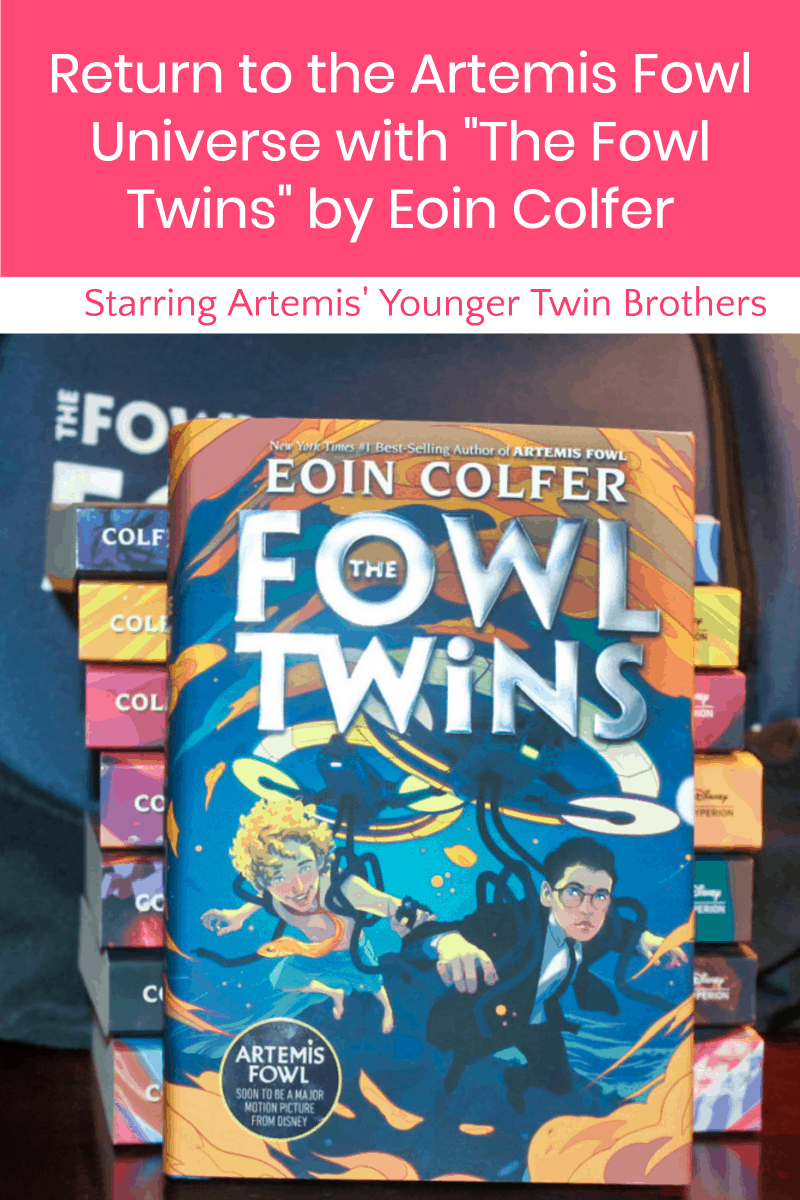 I partnered with Disney Book Group to share the news about The Fowl Twins by Eoin Colfer, in stores November 5, 2019. All opinions are always my own. 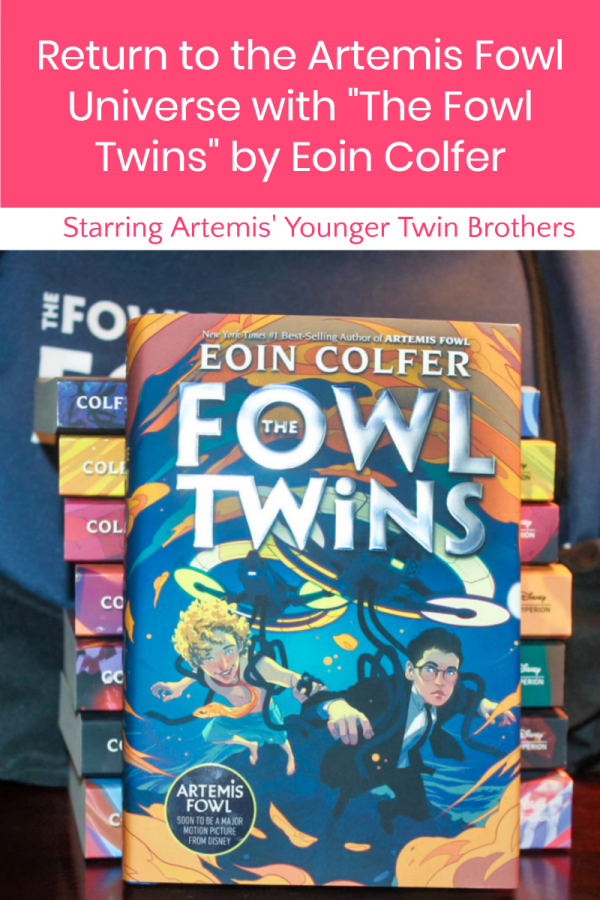 It’s been just around seven years since we said goodbye to Artemis Fowl. What was originally supposed to be a trilogy turned into 8 brilliantly written books spanning across multiple times and dimensions.We watched as the abnormally pale “almost psychopathic” boy grew into a not-quite-so-psychopathic young adult, and as former “enemies” became lasting friends. Alas, like all great stories, Artemis’ tale came to an end in The Last Guardian.

Now, just under a decade (or just over half a decade, depending on if you’re a glass half full or half empty person), author Eoin Colfer takes us back to the wonderfully weird and fantastically fantastical world of the Fowls. This time, we’re following the adventures/misadventures of the Fowl twins, Beckett and Myles. Read on to learn more about the Artemis Fowl series spinoff. Plus, stay tuned for a chance to win a “Double Trouble” prize pack! You’re going to love it!

THE FOWL TWINS By Eoin Colfer

We’re just about a week away from the day Fowl Fans have been waiting for ever since the twins made their first appearance in The Time Paradox! As the name implies, Colfer’s new Artemis Fowl spinoff is all about the genius criminal mastermind’s younger twin brothers. Published by Disney-Hyperion, The Fowl Twins is the perfect stocking stuffer gift both for fans of the original series and for introducing a whole new generation to the Fowl universe. Take a look at the synopses, then we’ll talk a bit more about the story (no spoilers, I promise). 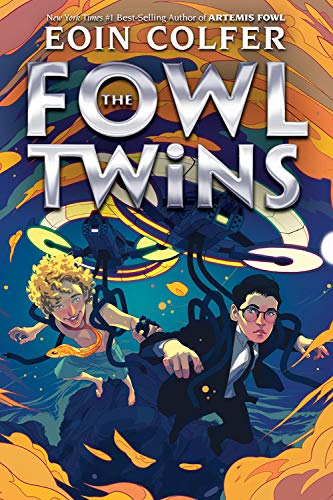 With all the hallmarks that made the Artemis Fowl series so popular, this hilarious spinoff adventure stars Artemis’ younger brothers, along with a nefarious nobleman, a shadowy nun, and a fairy intern, and a maverick troll.

One week after their eleventh birthday, the Fowl twins–scientist Myles, and Beckett, the force of nature–are left in the care of house security (NANNI) for a single night. In that time they befriend a troll who has clawed his way through the earth’s crust to the surface. Unfortunately for the troll, he is being chased by a nefarious nobleman and an interrogating nun, who both need the magical creature for their own gain, as well as a fairy-in-training who has been assigned to protect him.

The boys and their new troll best friend escape and go on the run. Along the way they get shot at, kidnapped, buried, arrested, threatened, killed (temporarily), and discover that the strongest bond in the world is not the one forged by covalent electrons in adjacent atoms, but the one that exists between a pair of twins.

One thing I really love about The Fowl Twins is the fact that Colfer isn’t really trying to teach kids any massive lessons. I read an interview with him in Publisher’s Weekly  in which he explained that this is purely a fun escapist story. “Kids these days need that, I think,” Colfer said.  “It’s all doom and gloom on the news. We’ve got Brexit, and refugees, and racism. It’s terrifying. So I deliberately set out to write a book for kids in which they will not learn anything at all.” 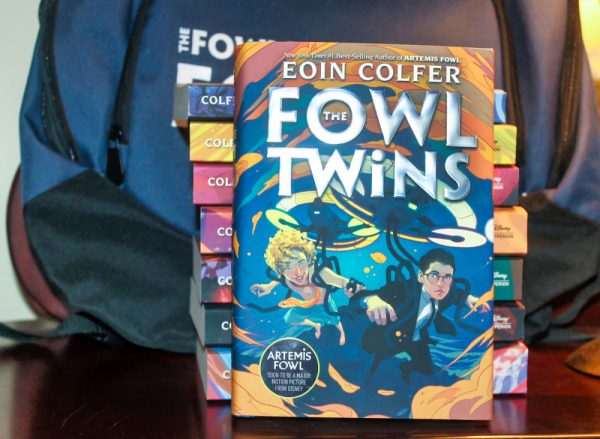 He definitely succeeded in doing so. The book is pure fun! However,  Colfer is selling himself short by saying that kids won’t learn anything at all. I mean, the twins’ best friend is a troll, a creature that usually stars as an antagonist in most fairy tales. That alone teaches kids not to put much stock in stereotypes. Of course, Colfer’s troll isn’t quite what we’re used to, but I don’t want to give away anything that you can’t find in the synopses.

The story is filled with everything you’ve come to love in a Colfer novel, including clever acronyms (the nun actually works for an organization called ACRONYM), a suit-wearing boy genius (Myles may just be even smarter than Artemis), and loads of laughs.

I highly recommend it, especially to reluctant readers in the middle-grade range (although adult fans of Artemis Fowl will enjoy it). As of now, Colfer plans to write one more book for the series, but that could change. Remember, Artemis Fowl’s tale was only meant to be a trilogy!

Find The Fowl Twins at your favorite book retailer on November 5th, or pre-order it now at Amazon or Barnes & Noble in hardcover or Kindle/Nook format. 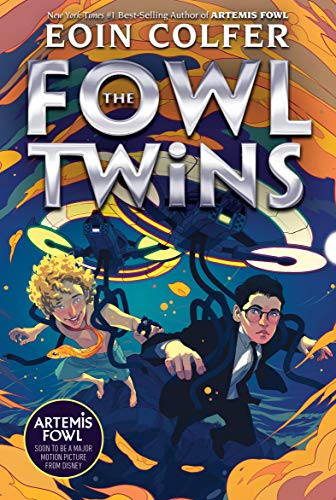 Connect with the Artemis Fowl Fandom on Social Media

Share your passion for the Artemis Fowl fandom on social media by using the hashtag the #TheFowlTwins.

Learn more about The Fowl Twins on the official book page

Eoin Colfer is the author of the New York Times best-selling Artemis Fowl series, which was adapted into a major motion picture from the Walt Disney Studios. He also wrote the critically acclaimed WARP trilogy, and many other titles for young readers and adults, including Iron Man: The Gauntlet, Airman, Half Moon Investigations, Eoin Colfer’s Legend of . . . books, The Wish List, Benny and Omar; and Benny and Babe. In 2014, he was named Ireland’s laureate for children’s literature. He lives with his wife and two sons in Dublin, Ireland, where he is working on the next Fowl twins novel.

Meet Artemis Fowl’s twin brothers and share the fun with twin prizes. Enter below for your chance to win:

Giveaway open to US addresses only and ends on November 15th. Prizing and samples provided by Disney Book Group. Good luck!