Wondering where to find authentic Black Forest Cuckoo Clocks without hopping on a plane to Germany (or why authenticity even matters)? Read on to find out! 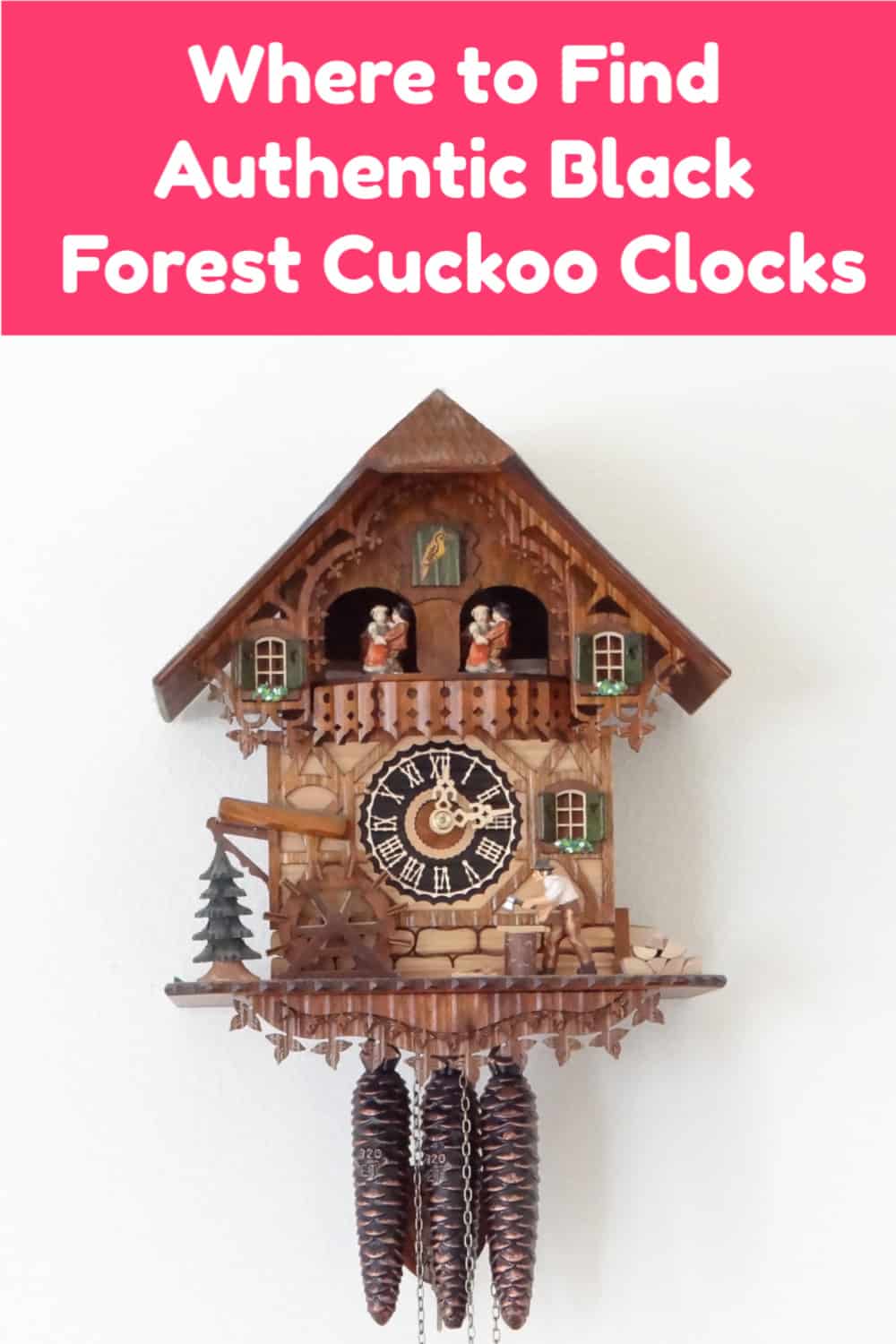 *FYI, CuckooClocks.com sent me one of their authentic Black Forest Cuckoo Clocks in exchange for sharing my thoughts. All opinions are my own.

I have a major fascination with clocks in general, and cuckoo clocks specifically. When I was little, my grandfather took a long work trip over to Germany to learn more about how to fix CT and MRI machines. Being the incredibly generous man that he was, he brought back numerous gifts for everyone in the family. Among them, an authentic Black Forest cuckoo clock for my grandmother.

My grandfather was always buying my gran beautiful clocks, so my fascination with them must be genetic. I’m not sure what happened to the cuckoo clock he brought back, but it likely ended up with one of my aunts. My gran distributed some of her clocks long before she passed away. My son, her first great-grandchild, received his favorite-a gorgeous Seiko that sings Beatles songs that he’ll get when he moves into his own home someday.

I love the idea of passing neat clocks down to my own future grandchildren. I don’t have much to give them, as I’m not exactly in a financial position that allows me to collect beautiful heirlooms. Thanks to CuckooClocks.com, though, I now have a really gorgeous and authentic Black Forest cuckoo clock to pass along.

CuckooClocks.com sent me this beautiful clock. Take a peek at the photo from their website below. I have pictures to show you, too, but the lighting isn’t great in my house, so the colors are a bit off. The walnut wood is really rich and stunning in real life. 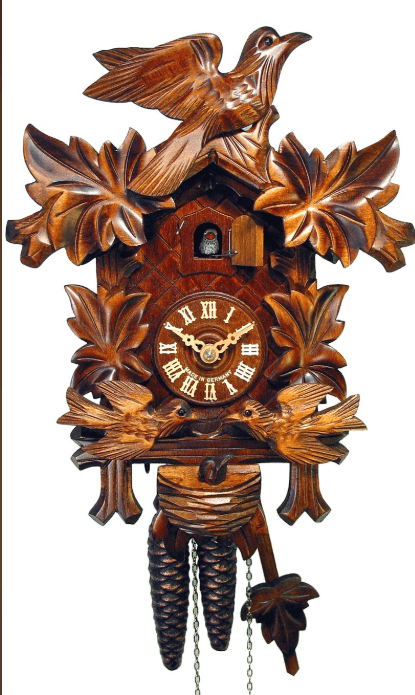 I was all set to hang my clock up the day it arrived, but turns out I didn’t have a strong enough screw. In pre-lockdown days, I would have just run down to the store and grabbed one. These days, every outing it meticulously calculated and planned, so I had to wait until my “go out day.” I finally got my cuckoo clock all set up this weekend, though. Yay! Isn’t it beautiful? 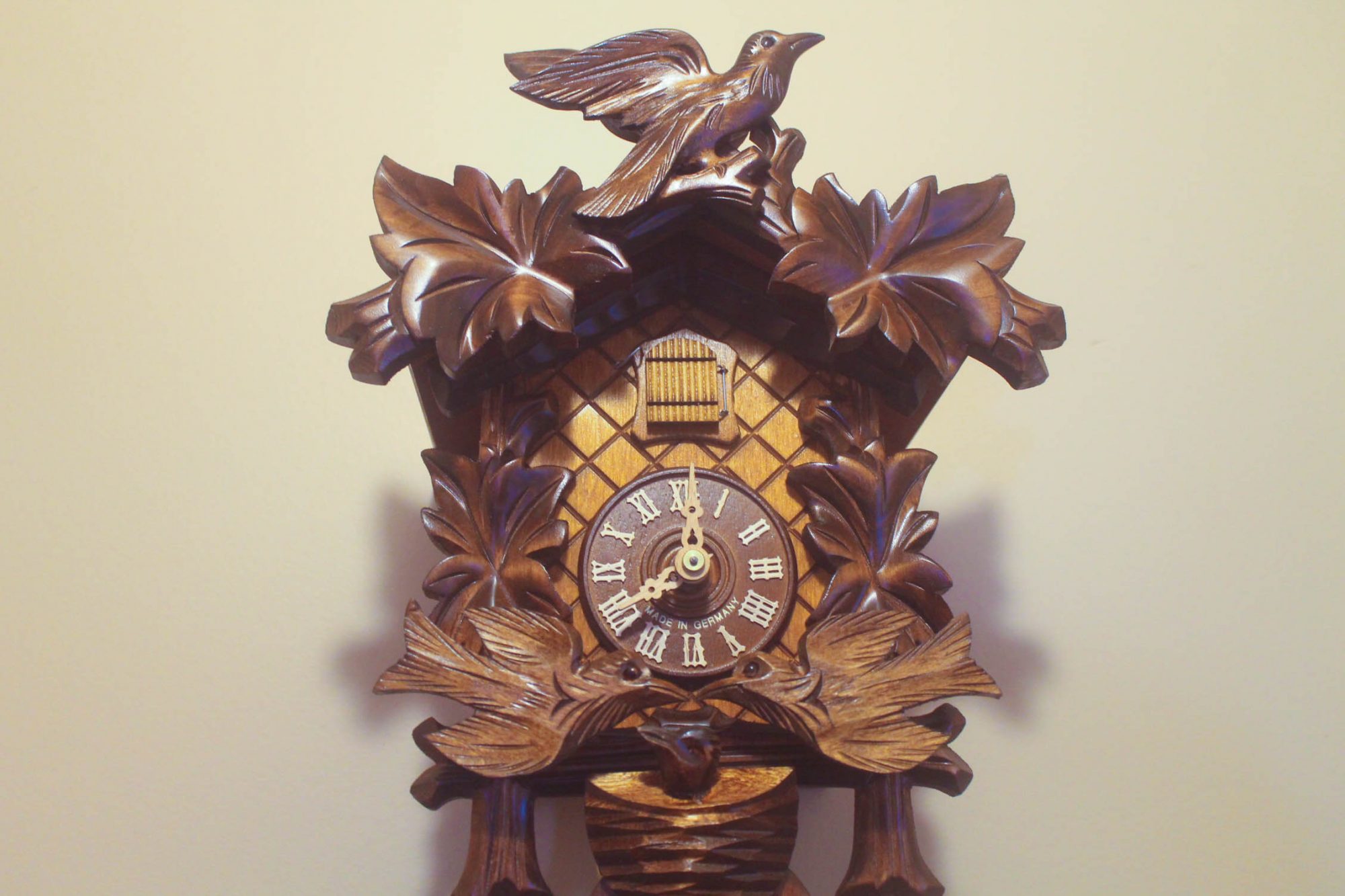 Want to see it in action? Check out the video below! I apologize that the angle isn’t perfect. Even standing on a stool, I’m way too short. 🙂

How stinking cute is that little cuckoo bird? Don’t you love him?!? Alas, my dog does not. She is utterly terrified of the sound of the cuckoo. I thought she’d bark at it, but I didn’t expect the sheer look of terror on her face when it called out. In the cuckoo bird’s defense, she’s terrified of a lot of things. The first time she heard my mom use our electric veggie chopper, she wouldn’t come in the house for hours!

So, I have to do “desensitization training” with her. Thankfully, the clocks come with a nighttime mode. Rather than letting him sing loud and proud every hour, I push the little bar down. Then, I play the video of it every so often. Once she gets over her initial shock, she’ll be fine with it. She just doesn’t like new sounds. Now, if I could just get the cats to stop giving it threatening stares….

Since we’re talking about authentic Black Forest cuckoo clocks, let’s discuss how you can tell whether yours is genuine or a knock-off. 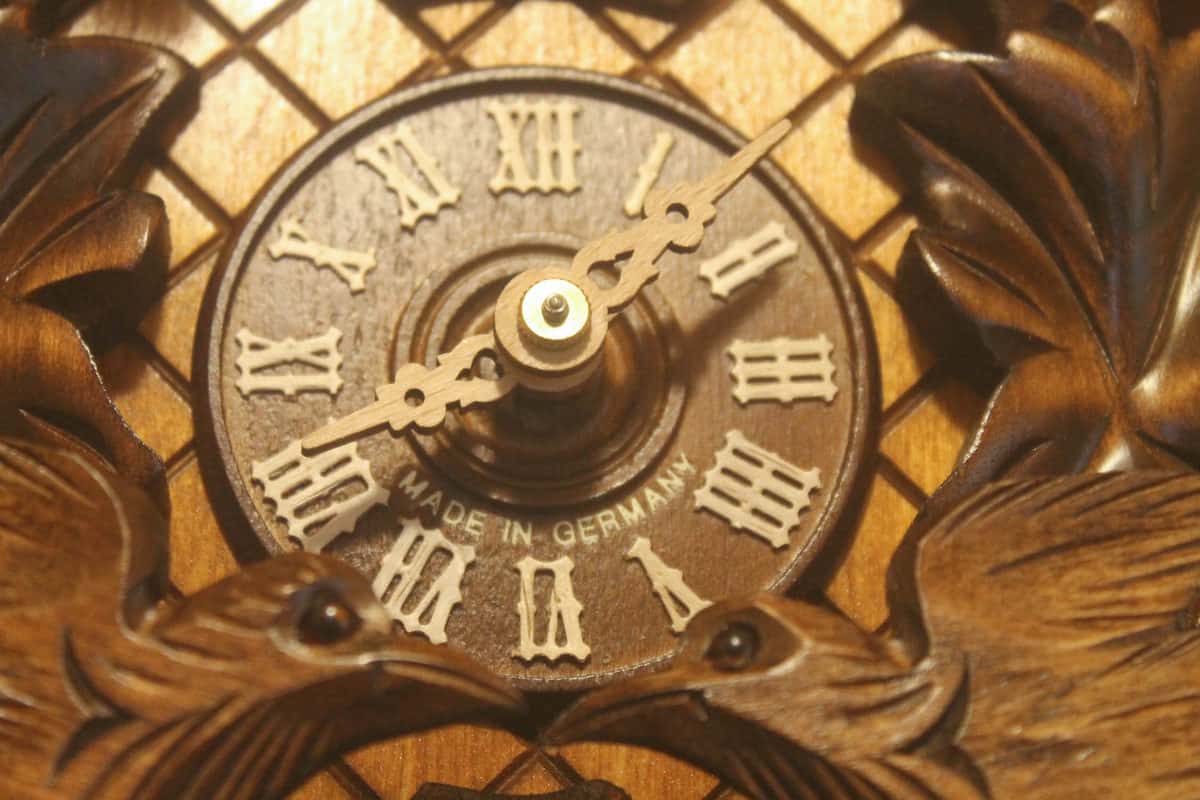 The obvious sign is, of course, the “Made in Germany” on the clock face. However, a cuckoo clock can be made in Germany and still not be authentic. There’s actually a long list of “signs” that indicate authenticity, including everything from the outer style to the inner workings. I’m not a clock expert. Like, at all. I’m going to assume that you’re not, either.

So, the easiest way to tell  is to look for Black Forest Clock Association certificate of authenticity. That seal isn’t given out lightly. Only clocks made entirely in the Black Forest (and with really high standards) receive it. 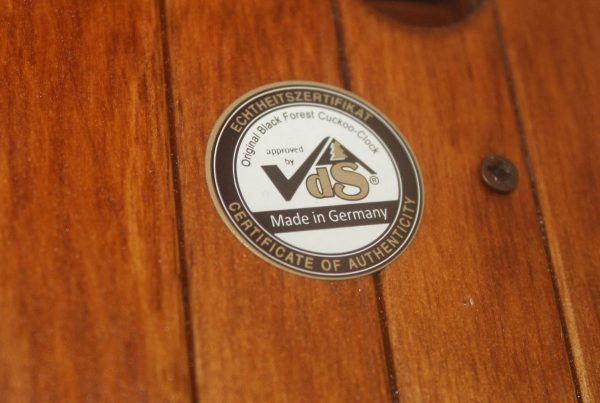 While I love the fact that the Black Forest Clock Association seal means I’m getting an expertly crafted heirloom-quality clock, that’s actually not why I wanted one. For me, it’s all about the connection to the Black Forest itself. I love the mystery, myths and fairy tales surrounding the region. 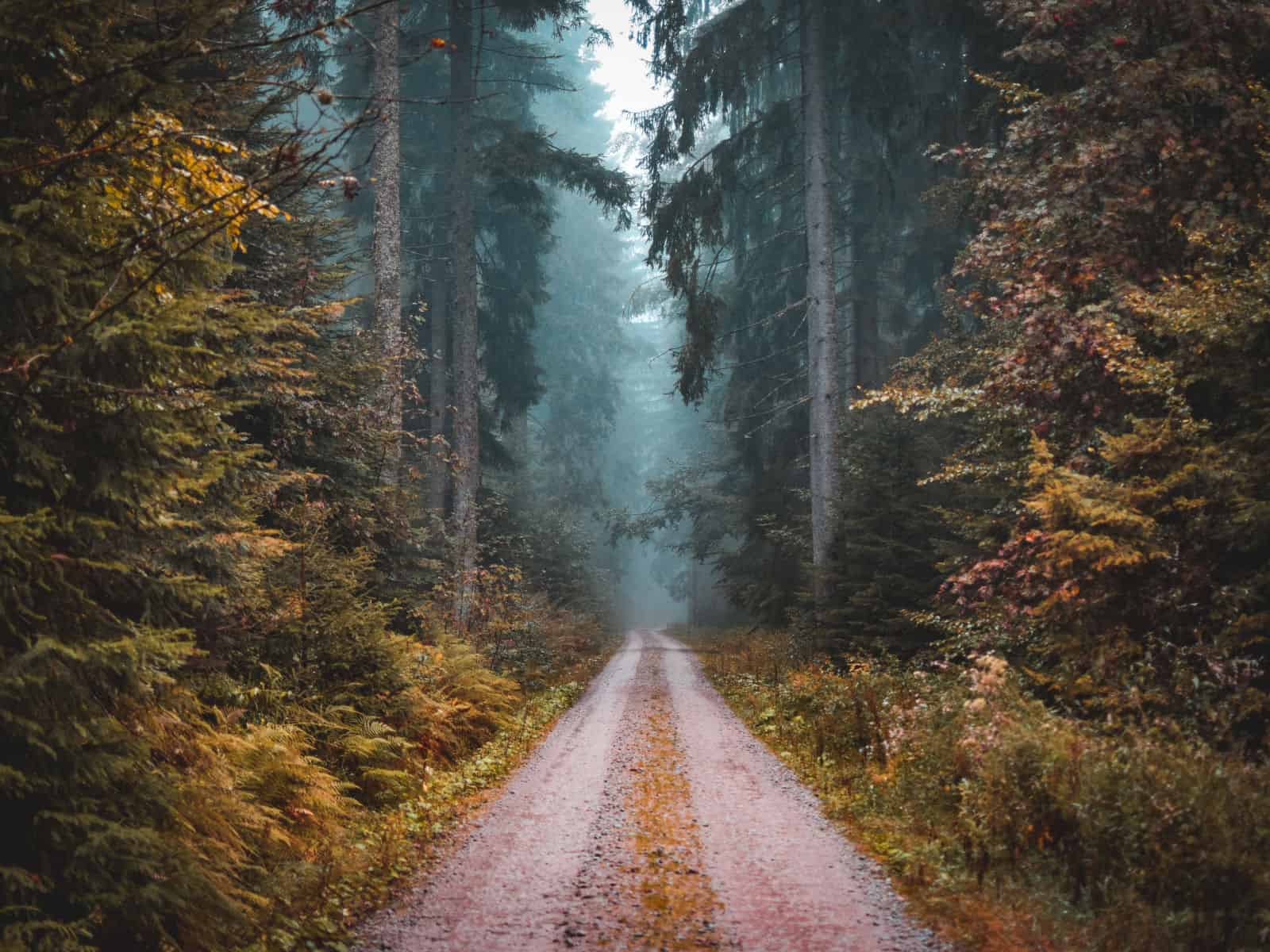 Some of my ancestors came from that region. My Pop-Pop connected with a few distant cousins when he was over there, and even found our ancestral castle! Okay, so it wasn’t really a castle (I think he actually said chalet), but in my 7-year-old mind, that’s what it sounded like. 😀 Since I’ll probably never be able to travel there myself, I love the idea of having a small piece of the Black Forest in my home.

I had a really hard time choosing a favorite from CuckooClocks.com, especially since they sell so many different types. If you’re not as madly in love with mine as I am, take a look at a few others that I think are just beautiful. 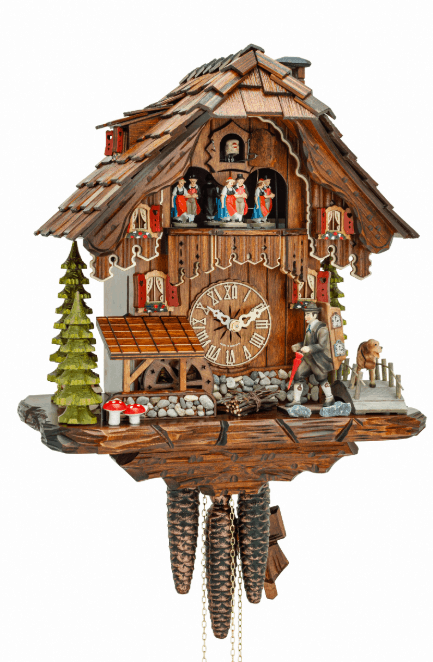 Handmade by the Hekas company, this one cuckoos and plays music while the charming dancers spin around. 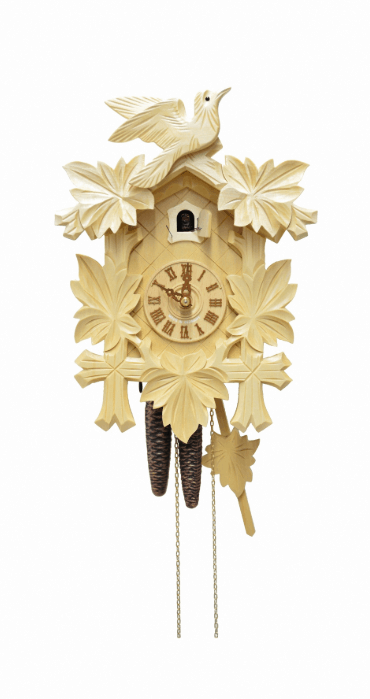 If you don’t really love the darker wood shades, this one may be more your style. It’s still an authentic Black Forest clock, but it’s made with pinewood instead of richer walnut. 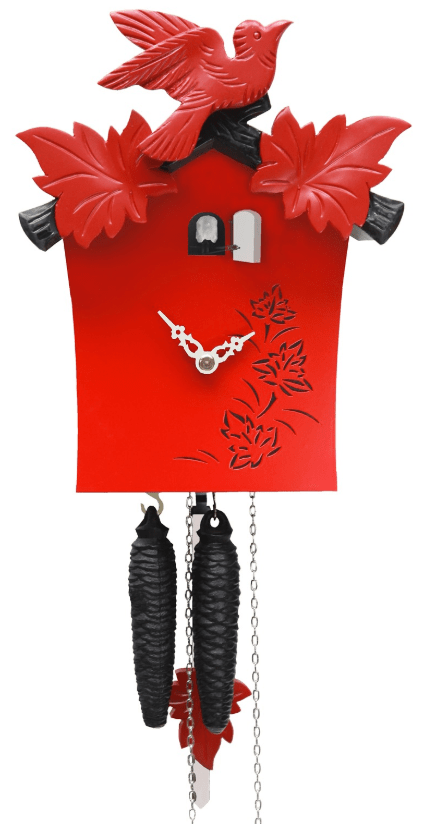 They also have a selection of modern-style cuckoo clocks, like this pretty red one made by the Rombach & Haas Clock Factory in Schonach. Fun fact, Haas is my maiden name! Okay, this one is definitely a major splurge at nearly $6K, but isn’t it beautiful? It’s the 2019 Cuckoo Clock of the Year. It has an 8-day running time, cuckoos and plays music. CuckooClocks.com also sells beautiful grandfather clocks. My own grandfather bought one very similar to this one for my gran (one of my aunts has it now).

If you don’t love any of these, check out CuckooClocks.com for a ton more options. They have everything from affordable 1-day running time clocks to extraordinarily detailed 8-day clocks. Just remember, if you want to be sure you’re getting an authentic Black Forest cuckoo clock, look for that seal in the description.