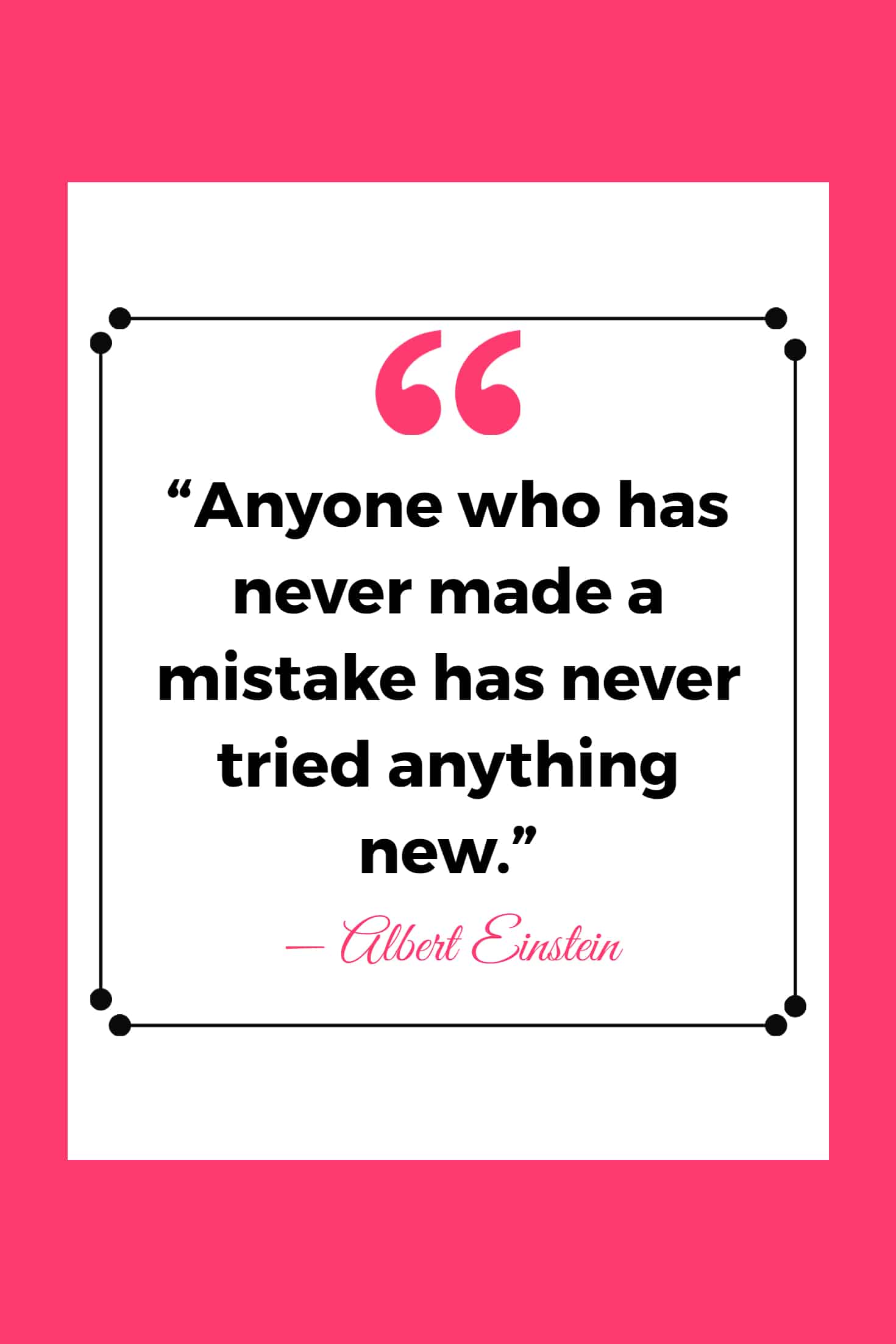 If you find yourself struggling to admit when you’re wrong or judging yourself harshly for “oops” moments, maybe these quotes about mistakes will help inspire you to cut yourself (and others) a break.

Look, there isn’t a person alive who hasn’t made a mistake.  Not one. Period. Yet, not only do we try to sweep our own screw-ups under the rug,  we treat people like they’re beneath us when they screw up. It’s bonkers, really.

Rather than feel ashamed of yourself- or shame others- for making mistakes, try learning from them. Own up to them.  Embrace them for what they are- valuable life lessons. Apologize when necessary. Then move on.

Here are some of my favorite quotes about mistakes to inspire you to do all of the above.

I put each quote in text beneath it for those who can’t see the images, and to make copying and pasting easier for those who want to save the quotes for their own blog posts, journals, etc. After all, I only own the images, not the words themselves.

Head’s up, linked book titles are affiliate links. I get a minuscule commission if you decide to buy something through them. Still, it helps, and it doesn’t cost you anything extra. 🙂

1. We learn from failure…

“We learn from failure, not from success!”

“You must never feel badly about making mistakes … as long as you take the trouble to learn from them. For you often learn more by being wrong for the right reasons than you do by being right for the wrong reasons.”

3. The only thing one never regrets…

“Nowadays most people die of a sort of creeping common sense, and discover when it is too late that the only things one never regrets are one’s mistakes.”

“Failure is instructive. The person who really thinks learns quite as much from his failures as from his successes.”

“Freedom is not worth having if it does not include the freedom to make mistakes.”

“Confidence turns into pride only when you are in denial of your mistakes.”

“At an early age I learned that people make mistakes, and you have to decide if their mistakes are bigger than your love for them.”

― Angie Thomas, The Hate U Give

9. If an apology is followed by…

“If an apology is followed by an excuse or a reason, it means they are going to commit same mistake again they just apologized for.”

“It is only those who do nothing who makes no mistake.”

12. Basic rules of the universe

“One of the basic rules of the universe is that nothing is perfect. Perfection simply doesn’t exist…..Without imperfection, neither you nor I would exist”

13. The greatest mistake you can make…

“The greatest mistake you can make in life is to be continually fearing you will make one.”

“If you are afraid to take a chance, take one anyway. What you don’t do can create the same regrets as the mistakes you make.”

15. Sharp people learn from mistakes of others

“What a waste my life would be without all the beautiful mistakes I’ve made.”

“We are all flawed, my dear. Every one of us. And believe me, we’ve all made mistakes. You’ve just got to take a good hard look at yourself, change what needs to be changed, and move on, pet.”

“Have no fear of perfection – you’ll never reach it.”

19. Don’t be afraid of making mistakes…

“You’re afraid of making mistakes. Don’t be. Mistakes can be profited by. Man, when I was young I shoved my ignorance in people’s faces. They beat me with sticks. By the time I was forty my blunt instrument had been honed to a fine cutting point for me. If you hide your ignorance, no one will hit you and you’ll never learn.”

“You can never make the same mistake twice because the second time you make it, it’s not a mistake, it’s a choice.”

“The mistakes I’ve made are dead to me. But I can’t take back the things I never did.”

“In school we learn that mistakes are bad, and we are punished for making them. Yet, if you look at the way humans are designed to learn, we learn by making mistakes. We learn to walk by falling down. If we never fell down, we would never walk.”

“It takes guts and humility to admit mistakes. Admitting we’re wrong is courage, not weakness.”

― Roy T. Bennett, The Light in the Heart

“So that’s my wish for you, and all of us, and my wish for myself. Make New Mistakes. Make glorious, amazing mistakes. Make mistakes nobody’s ever made before. Don’t freeze, don’t stop, don’t worry that it isn’t good enough, or it isn’t perfect, whatever it is: art, or love, or work or family or life.”

25. Anyone who has never made a mistake…

“Anyone who has never made a mistake has never tried anything new.”