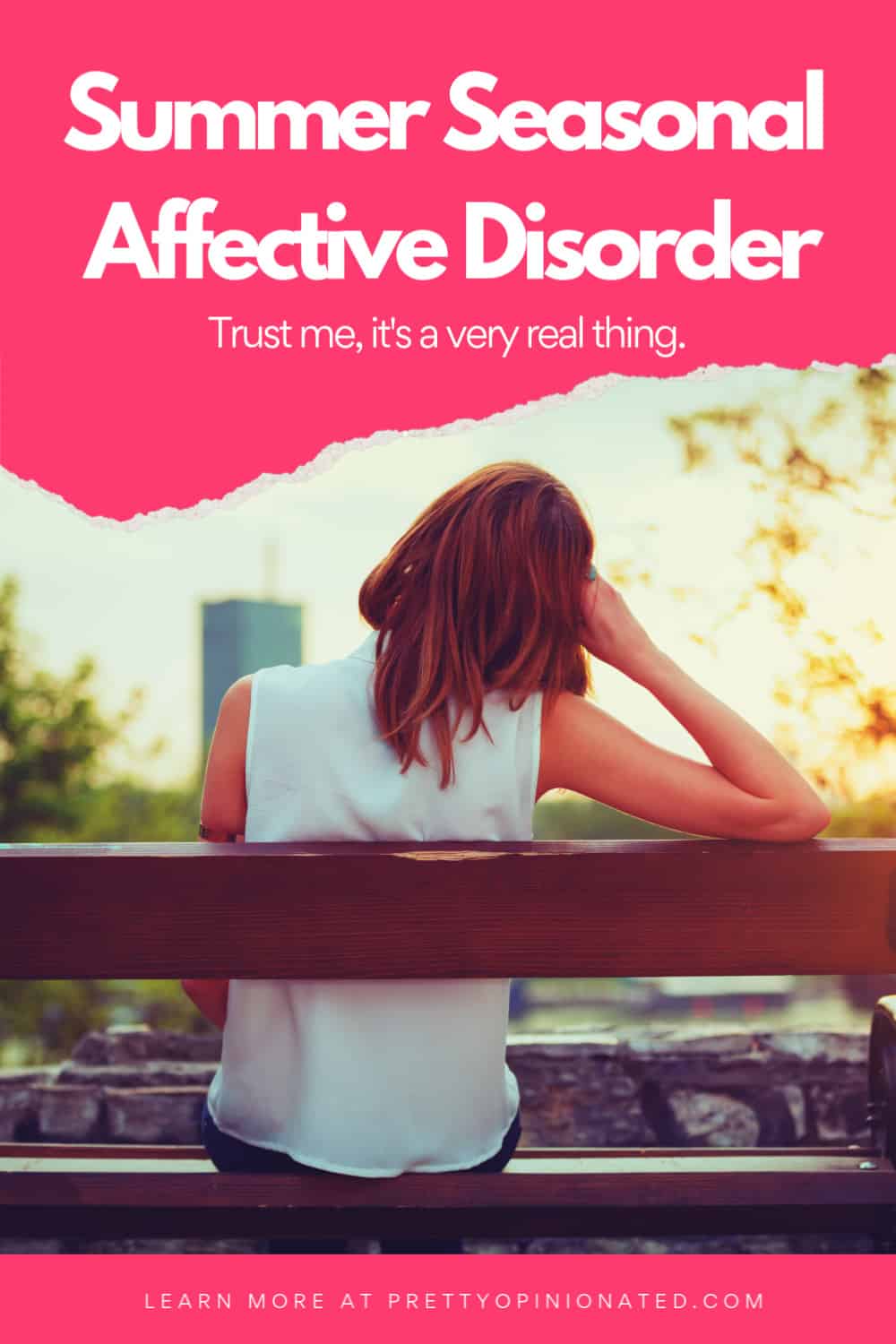 Summer seasonal affective disorder doesn’t get nearly as much attention as winter SAD, but trust me, it’s a real thing. Since we’re heading into the toughest part of the year for people like me, now seems like a good time to bring it up.

When I tell people that I have summer SAD, I usually get one of the following reactions:

Usually, a mixture of both. So, let me be clear. Yes, there is such a thing. No, I don’t hate summer. Also, yes I am weird, but for entirely different reasons. 🙂 Let’s discuss. FYI, there won’t be a cutesy listicle of “X genius ways to beat summer sadness.” This isn’t meant to cure you. I’m not a psychologist, and I can’t even cure myself. I just want you to know you’re not alone.

I get why people think Summer SAD isn’t real. Winter depression gets all the press, for one thing. For another, search engines are convinced that you really mean “winter SAD,” so results for actual summertime seasonal affective disorder get shoved to page 150. I’m only mildly exaggerating. Google’s algorithm isn’t half as smart as they like to think it is, but that’s a whole different conversation.

Oddly, WebMD has one of the most well-researched articles on the topic. I say “oddly” because I have very mixed feelings about them as a credible medical reference.

Summer SAD is also far rarer than winter SAD, affecting roughly 10% of all cases of major depressive disorder with a seasonal pattern. When you consider that only about 4-6% of the US population suffers from any form of SAD, it’s easy to see why it doesn’t really get much attention. I mean, if my math is right (meaning, if I put the right numbers into the calculator), only about 0.005% of people deal with Summer SAD. 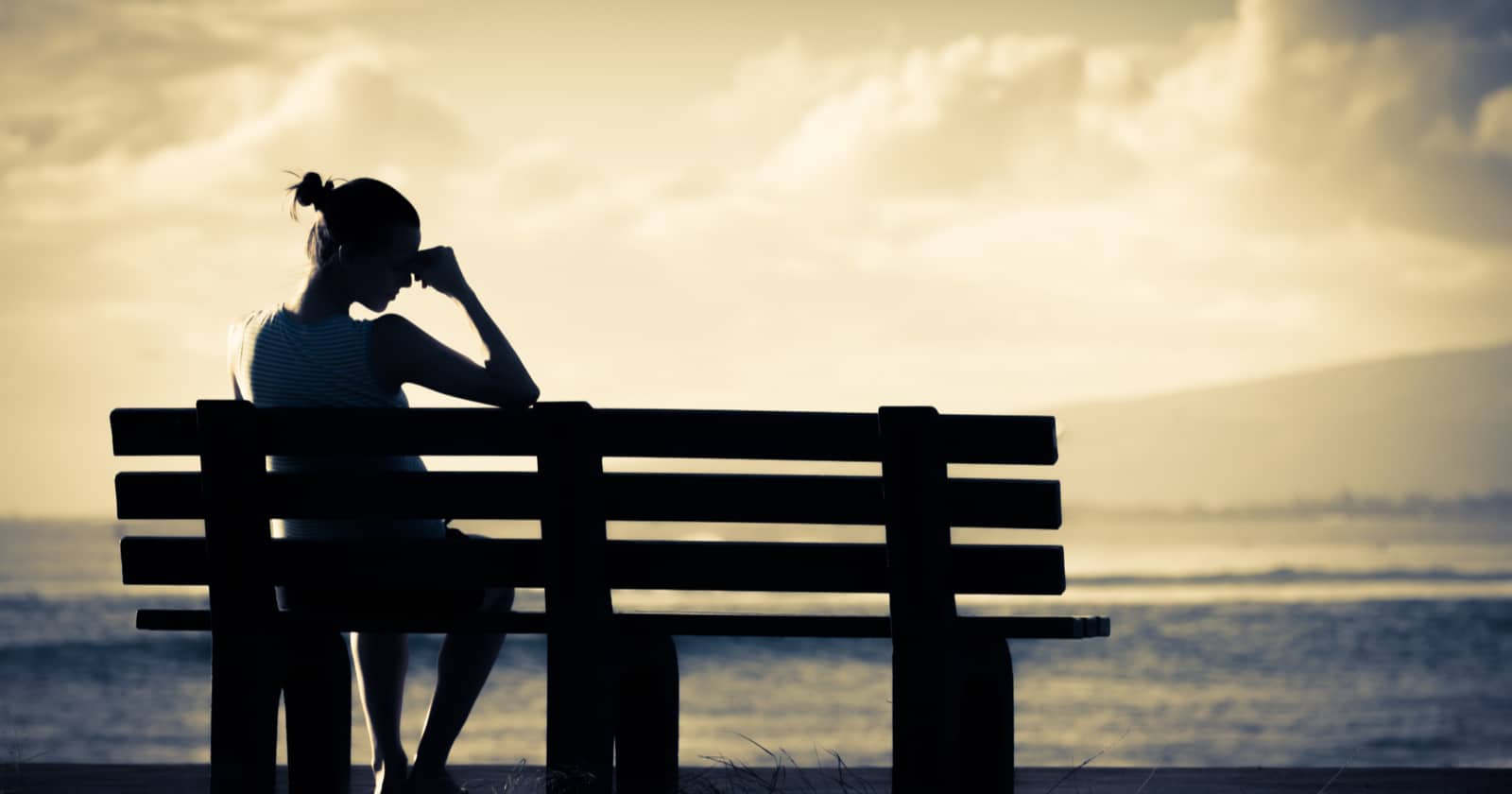 What do professionals say about Summer SAD?

However, experts do have some hypotheses about what causes it. As Jordan Gaines Lewis, Ph.D. explains in a Psychology Today article, it could have something to do with circadian rhythms. People often stay up later in the summer, after all. That’s bound to affect the brain. Except I go to bed at a reasonable time every night and I still cry myself to sleep most nights during the summer.

Lewis also explains that people who live the Southern US with longer, hotter summers seem more at risk. Except I live in the Poconos, a solid 4-seasons state (or, at least it used to be before we wrecked the planet).

One of her explanations (or rather, explanations of an explanation) does make sense to me. Summer’s heat is oppressive and agitating.  Okay, I am way oversimplifying what she said, but that one does feel like a good fit.

WebMD goes a bit farther, adding body image issues and financial concerns, along with heat and disrupted schedules, as possible reasons. Personally, I think it’s all of the above. Let me explain by sharing how summer SAD makes me feel.

How Summertime SAD affects me personally

During the summer, there are days when I think it wouldn’t be so bad if I didn’t wake up the next morning. Let me clarify, I am in no way suicidal. I would never take my own life, and I do not genuinely want to die. Sometimes, though, the crushing weight of sadness and stress does give way to fleeting thoughts about how peaceful it would be to not feel that way any longer.

I am not telling you any of this in an attempt to garner sympathy. I’m not fishing for compliments. I am fully aware that it’s not your responsibility to make me feel better about myself.  I know that many people are going through far worse things and don’t pretend otherwise.

I just want to share what goes through my head every day so that others who feel the same know that they’re not alone, and to give perspective into just how deeply summer can crush the souls of people with so-called “reverse SAD.” I hate that term, though, because SAD= seasonal affective disorder, and last I checked, summer was still a season.

While I can’t blame my body image issues on anyone but myself, they began a long time ago. A boy said I was chubby but cute once when I was about 15. I weight 115 lbs. I weigh significantly more now, so I can’t help but think “if I was fat then, what am I now?” I hate myself because of my weight. I am embarrassed to wear a bathing suit. Heck, I’m embarrassed to wear shorts and a t-shirt.

During the winter, I can hide at least some of my weight under a sweater, a hoodie, a heavy coat. Sometimes all of the above. I know, why don’t I just go on a diet and lose the weight? I’ve tried. I am trying. I won’t go into the many excuses (and yes, I know they’re just that) for why it’s not working. However, if I thought I was fat at 115 lbs, even if I do manage to get down to what one would consider “skinny,” it doesn’t fix the underlying issues.

Perhaps now you’re thinking, “Why do you care what others think? Just be happy with who you are!” If you can do that, great. I’m very happy for you, and I don’t mean that sarcastically. I have year-round major anxiety issues on top of my SAD. The social anxiety part of that means that while I say I don’t care what anyone thinks of me, in actuality I spend 45 minutes composing a 2-sentence Tweet or Facebook status that I ultimately delete without posting because I worry that it’ll make me sound dumb, lame, boring, unintelligent, and a slew of other negative things. So, yeah, I care what others think when they see me, as much as I wish I didn’t.

I hate being hot. Hate it so much. I’d rather be cold. When you’re cold you can toss on a sweater, turn on the heat, cuddle under a blanket, and/or indulge in a tasty hot beverage. When you’re hot, you can only take so much off.

Plus, I have weird sleep attire issues. I can only sleep while wearing a long-sleeved shirt, knee socks, and pajama pants. I’ve tried getting over it and sleeping in shorts and a t-shirt. I just can’t. I’m sure there’s a deep psychological reason stemming from a need to feel secure or something, but knowing that doesn’t change the fact that I cannot sleep when everything but my hands and my head aren’t covered.

When it’s so hot that even my two fans blowing directly on me don’t help, I basically just don’t sleep. Hmmm, maybe Dr. Lewis was onto something there after all when she spoke of disrupted circadian rhythms.

Summer reminds me that I’m broke

While my financial concerns are never far from my mind, summer has a way of really driving that point home. I haven’t taken a true vacation in about a decade. No, scratch that, it’s actually been a complete decade this month. It’s been about five years since I took a week off work. About three years since I took a long weekend. About two years since I took a full weekend. I’m not some sort of workaholic. I can’t afford to take off more than one day because even with working about 48 hours a week year-round, I’m still barely making ends meet.

Meanwhile, my son’s friends are heading off to the beach, to amusement parks, and water parks. Well, maybe not the last two this year, since most of those are still closed down around here. Still, you get my point. If it was just me, I probably wouldn’t care about those things. I’d honestly be content if I could manage to take a week off and just stay home. However, I feel like I’m failing my son, that he’s missing out on the quintessential summer experience because of my shortcomings.

I wish I could finish this with tips on overcoming summer seasonal affective disorder. A cheery little listicle filled with ideas like “try lavender!” or “meditate!” or “don’t be afraid to ask for help!” That last one is good advice. If you feel like you’re not going to make it through the season, please do reach out. Beyond that, though, I’ve got nothing.

Like I said, the point of this wasn’t to create a Pinterest-worthy “27 genius ways to defeat summer SAD that will totally blow your mind” post full of the same old totally non-mind-blowing common sense tips like “eat healthy!” and “meditate!” It was simply to let you know that you’re not alone.That’s really all I can do for you.

I hope it’s something.